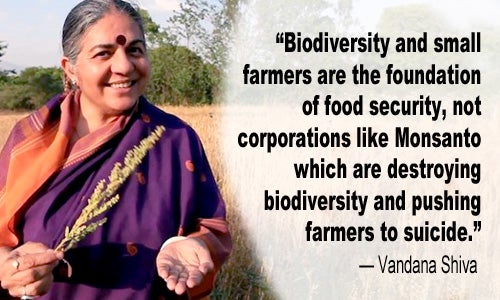 Just as our Vedas and Upanishads have no individual authors, our rich biodiversity, including seeds, have been evolved cumulatively. They are a common heritage of present and future farm communities who have evolved them collectively. I recently joined tribals in Central India who have evolved thousands of rice varieties for their festival of “Akti.” Akti is a celebration of the relationship of the seed and the soil and the sharing of the seed as a sacred duty to the Earth and the community. 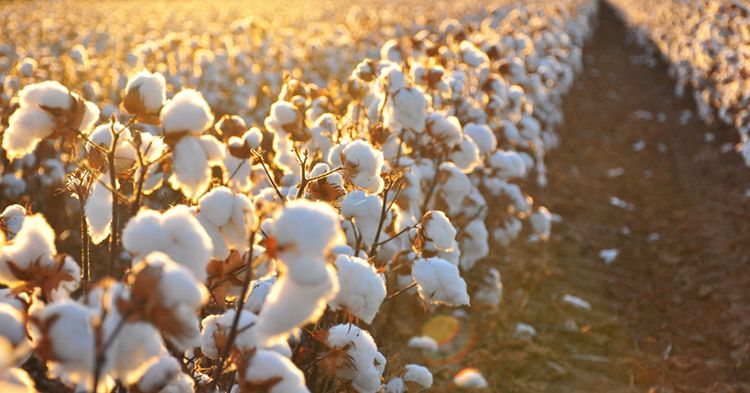 “Why do farmers adopt Bt cotton which harms them? But farmers do not choose Bt cotton,” Shiva writes. “They have to buy Bt cotton as all other choices are destroyed.” Photo credit: Kimberly Vardeman / Flickr

In addition to learning about seeds from women and peasants, I had the honor to participate and contribute to international and national laws on biodiversity. I worked closely with our government in the run-up to the 1992 Rio Earth Summit, when the UN Convention on Biodiversity (CBD) was adopted by the international community. Three key commitments in the CBD are protection of the sovereign rights of countries to their biodiversity, the traditional knowledge of communities and biosafety in the context of genetically-modified foods.

The UN appointed me on the expert panel for the framework for the biosafety protocol, now adopted as the Cartagena protocol on biosafety. I was appointed a member of the expert group to draft the National Biodiversity Act, as well as the Plant Variety and Farmers Rights Act. We ensured that farmers rights are recognized in our laws. “A farmer shall be deemed to be entitled to save, use, sow, resow, exchange, share or sell his farm produce, including seed of a variety protected under this act, in the same manner as he was entitled before the coming into force of this act”, it says.

We have worked for the past three decades to protect the diversity and integrity of our seeds, the rights of farmers and resist and challenge the illegitimate IPR monopolies of companies like Monsanto which do genetic engineering to claim patents and royalties.

Patents on seeds are unjust and unjustified. A patent or any intellectual property right is a monopoly granted by society in exchange for benefits. But society has no benefit in toxic, non-renewable seeds. We are losing biodiversity and cultural diversity, we are losing nutrition, taste and quality of our food. Above all, we are losing our fundamental freedom to decide what seeds we will sow, how we will grow our food and what we will eat.

Seed as a common good has become a commodity of private seed companies. Unless protected and put back in the hands of our farmers, it is at risk of being lost forever.

Across the world, communities are saving and exchanging seeds in diverse ways, appropriate to their context. They are creating and recreating freedom—for the seed, for seed keepers and for all life and all people. When we save the seed, we also reclaim and rejuvenate knowledge—the knowledge of breeding and conservation, the knowledge of food and farming. Uniformity as a pseudo-scientific measure has been used to establish unjust IPR monopolies on seed. Once a company has patents on seeds, it pushes its patented crops on farmers in order to collect royalties.

Humanity has been eating thousands and thousands (8,500) of plant species. Today we are being condemned to eat GM corn and soya in various forms. Four primary crops—corn, soya, canola and cotton—have all been grown at the cost of other crops because they generate a royalty for every acre planted. For example, India had 1,500 different kinds of cotton, now 95 percent of the cotton planted is GMO Bt Cotton for which Monsanto collects royalties. More than 11 million hectares of land are used to cultivate cotton, of which 9.5 million hectares is used to grow Monsanto’s Bt variety.

A common question is: Why do farmers adopt Bt cotton which harms them? But farmers do not choose Bt cotton. They have to buy Bt cotton as all other choices are destroyed. Monsanto establishes its seed monopoly through three mechanisms:

2. Influence public institutions to stop breeding. According to information received through RTI, the Central Cotton Research Institute did not release cotton varieties for Vidharba after Monsanto entered with its Bt cotton seeds. 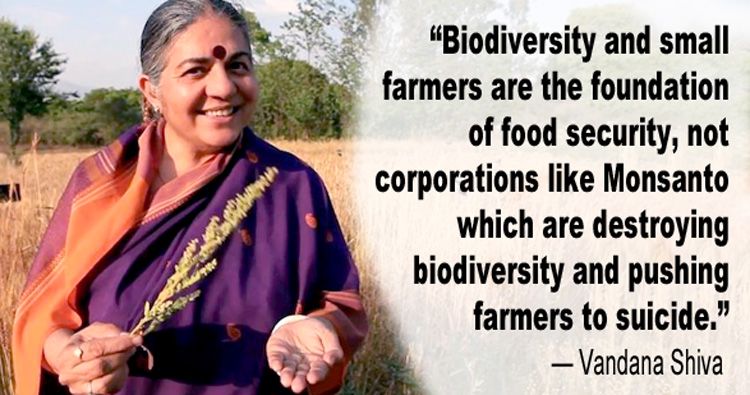 Monsanto and the biotechnology industry challenged the government order. We were impleaded in the Karnataka high court. On May 3, Justice Bopanna gave an order reaffirming that the government has a duty to regulate seed prices and Monsanto does not have a right to seed monopoly. Biodiversity and small farmers are the foundation of food security, not corporations like Monsanto which are destroying biodiversity and pushing farmers to suicide. These crimes against humanity must stop. That is why on Oct. 16, International Food Day, we will organize a Monsanto Tribunal at The Hague to “try” Monsanto for its various crimes.

Did Your State Make the Top 10 List for Its Commitment to Local Food?