Vandana Shiva: ‘Our Very Existence on This Planet Is Being Called Into Question’ 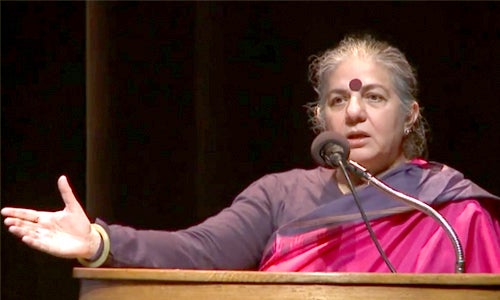 Vandana Shiva delivered a keynote address at the Earth at Risk 2014 conference held in San Francisco, California. Naturally, her speech packed quite a punch. She dismissed conventional measurements of prosperity like GDP, condemned industrial farming as “the single biggest destructive force on the planet today” and even cited a report by the Center for Disease Control that estimates 50 percent of American children will be autistic by 2050.

The conference, which took place in November, is put on by the Fertile Ground Environmental Institute, a non-profit that promotes environmental issues and social justice. During her speech, Shiva lamented the consequences of the Citizens United decision, which, Shiva says, has wreaked havoc on our political system. “The insanity of our times is that corporations which are legal entities which should exist with our permission, within bounds of responsibility, within the limits of ecological sustainability, have suddenly in this country defined themselves as persons,” said Shiva.

She railed against corporations’ constant attacks on citizens who are fighting simply for the right to know what’s in their food. “This is an ultimate clash of who is a being, who is a person and whose speech can count … Our very existence on this planet is being called into question.”