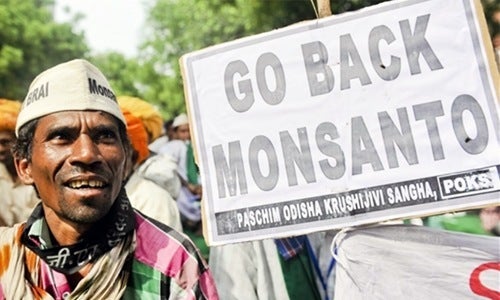 Monsanto also faces cases brought by state governments and domestic seed manufacturers, for the astronomical royalty it charges. In previous cases, Monsanto defended itself by saying that it was “trait fees” (for using its technology in cotton hybrids) and not royalty. 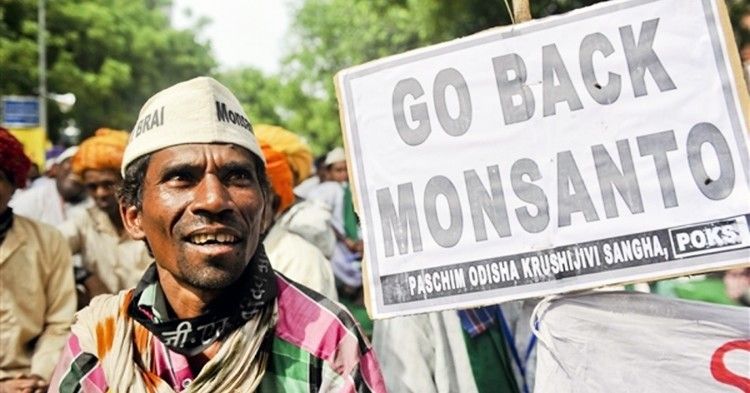 Fact is that Monsanto has viewed the laws of our land as mere hurdles in its way to swindle India and our farmers. On March 10, 1995, Mahyco (Monsanto-Mahyco) brought 100 grams of cotton seeds, containing the MON531-Bt gene, into India without the approval of the Genetic Engineering Appraisal Committee (GEAC).

Article (7) of the Environment Protection Act, 1986, states: “No person shall import, export, transport, manufacture, process, use or sell any hazardous microorganisms or genetically engineered organisms/substances or cells except with the approval of the GEAC.” GMO traits, once released into the environment, cannot be contained or recalled.

Genetically engineered cotton from the trials was sold in open markets. In some states, the trial fields were replanted the very next season with wheat, turmeric and groundnut, violating Para-9 of the Biosafety Guidelines (1994) on “post-harvest handling of the transgenic plants” according to which the fields on which GMO trials were conducted should have been left fallow for at least one year.

In face of these blatant violations of Indian laws and the risks of genetic pollution India faced, the Research Foundation for Science, Technology and Ecology filed a petition in the Supreme Court of India against Monsanto and Mahyco in 1999, for their violations of the 1989 rules for the use of GMOs under the Environmental Protection Act.

India’s laws, rightly, do not permit patents on seeds and in agriculture. This has always been a problem for Monsanto and, through the U.S. administration, it has attempted to pressure India into changing her robust intellectual property regime since the World Trade Organization came into existence and continues to do so today.

Monsanto-Mahyco Biotech (MMB) Ltd collected royalties for Bt cotton by going outside the law and charging “technology fees” and “trait fee” to the tune of $900 million from marginal Indian farmers, crushing them with debt.

In response to the unfair pricing, the government of Andhra Pradesh filed a complaint with the Monopolies and Restrictive Trade Practices Commission against MMB, pointing out that Monsanto was charging Andhra Pradesh farmers nine times what it was charging U.S. farmers for the same seeds. MMB said the royalty it charged reflected its research and development costs for Bt cotton, admitting that they were charging royalty to Indian farmers.

Monsanto’s ruthlessness is central to the crisis Indian farmers are facing. Farmers leveraged their land holdings to buy Bt cotton seeds and the chemicals it demanded, but the golden promise of higher yield and reduced pesticide use failed to deliver.

While the government of India is suing Monsanto, the government of Maharashtra has signed an MoU with Monsanto to set up the biggest seed hub in the country in Buldana, announced at “Make in India Week.” How can a corporation breaking India, taking the lives of Indian farmers, destroying our agriculture and food security and violating our laws be rewarded with the “Make in India” label?

For arrogantly breaking Indian laws and corrupting our regulatory systems, Monsanto must be held accountable. For the failure of Bt cotton, Monsanto must be made to pay damages to the farmers and seed companies that have had to pay “technology fees” for a failed technology.

With its flagship product failing across the country year after year and the dimming prospects of the super-profits the company has become used to, why would Monsanto make a large investment in Vidarbha unless it is sure of continued monopoly?

The technical expert committee has recommended that Herbicide Tolerance (Ht) and GMO varieties of crops for which India is the center of diversity, not be allowed in India. Is Monsanto counting on the GEAC approving Bayer’s herbicide-tolerant terminator mustard in contempt of the recommendations of the Technical Expert Committee? Allowing Bayer’s Ht terminator mustard will open the floodgates for herbicide tolerant crops, worsening India’s agrarian crisis and debilitating India’s food security.

Herbicide tolerance, which goes hand in hand with Monsanto’s glyphosate based RoundUp herbicide, has failed across the world at controlling weeds, creating super weeds. Glyphosate, classified by the World Health Organization as a carcinogen, is already being used across India and we are seeing an explosion of cancers in villages where glyphosate is used. If we allow another failed technology and its associated poisons to further destroy India’s rural economy and allow extraction of profits from Indian farmers, we will fail our nation and India’s future generations.