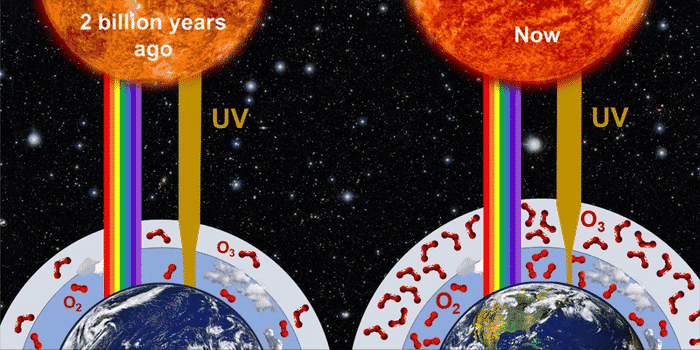 Sunlight is essential for life on Earth, but it is possible to have too much of a good thing.

The sun’s ultraviolet (UV) radiation can damage molecules like proteins and cause skin cancer in humans, and new research shows that the Earth may have been exposed to 10 times more of this radiation than previously thought during parts of the past 2.4 billion years.

The research, published in Royal Society Open Science Wednesday, looked specifically at fluctuations in the ozone layer since the Great Oxidation Event around 2.4 billion years ago. Around that time, oxygen levels began to rise from basically zero, fluctuating until settling at current concentrations about 400 million years ago, the press release explained.

The ozone layer is a part of the stratosphere, or the second layer of the atmosphere, according to the National Geographic Society. Ozone is a molecule composed of three oxygen atoms, and it is important because it absorbs UVB, the kind of UV radiation linked to cancer, cataracts and harm to crops and marine life, the Environmental Protection Agency explained. This is why the thinning of the ozone layer due to the emissions of chlorofluorocarbons (CFC) was a cause for concern.

The new research wasn’t interested in current ozone depletion, however, but rather used a three-dimensional chemistry-climate model to simulate ozone levels over the last 2.4 billion years.

“We find lower O3 columns (reduced by up to 4.68 times for a given O2 level) compared to previous work; hence, higher fluxes of biologically harmful UV radiation would have reached the surface,” the study authors wrote.

The oxygenation of Earth’s atmosphere coincides with the time when animals and other complex lifeforms moved out of the oceans and onto land, the press release explained. This means the findings are important for understanding the evolution of life on Earth.

“If our modeling is indicative of atmospheric scenarios during Earth’s oxygenated history, then for over a billion years the Earth could have been bathed in UV radiation that was much more intense than previously believed,” Cooke said in the press release. “This may have had fascinating consequences for life’s evolution. It is not precisely known when animals emerged, or what conditions they encountered in the oceans or on land. However, depending on oxygen concentrations, animals and plants could have faced much harsher conditions than today’s world. We hope that the full evolutionary impact of our results can be explored in the future.”