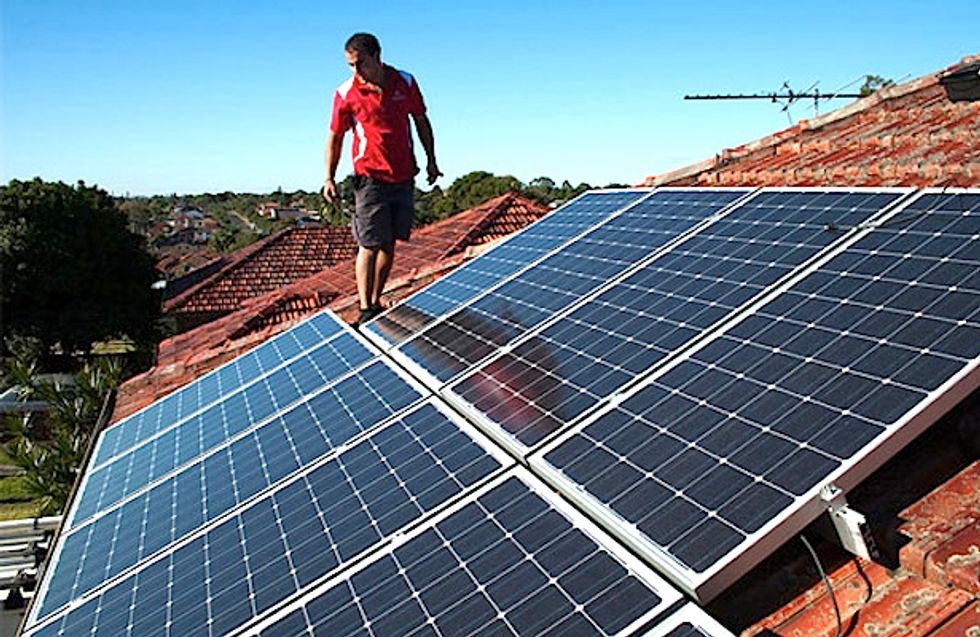 Issues of electricity regulation typically play out in drab government hearing rooms. That has not been the case this summer in Arizona, where a noisy argument—featuring TV attack ads and dueling websites—has broken out between regulated utilities and the rooftop solar industry.

Similar battles about how rooftop solar should be regulated have flared in California, Colorado, Idaho and Louisiana. And the outcome of these power struggles could have a major impact on the future of solar in the U.S.

Today’s solar industry is puny—it supplies less than one percent of the electricity in the U.S.—but its advocates say that solar is, at long last, ready to move from the fringe of the energy economy to the mainstream. Photovoltaic panel prices are falling. Low-cost financing for installing rooftop solar is available. Federal and state government incentives remain generous.

Yet opposition from regulated utilities, which burn fossil fuels to produce most of their electricity, could stop a solar boom before it gets started.

Several utilities, including Arizona Public Service and Denver-based Xcel Energy, have asked their state regulators to reduce incentives or impose charges on customers who install rooftop solar; so far, at least, they aren’t making much headway. A bill in the California legislature, backed by the utility interests would add $120 a year in fees to rooftop solar customers.

But other utility companies are adopting a different strategy—they are joining forces with solar interests. NRG Energy, based in Princeton, NJ, has created a rooftop solar unit to sell systems to businesses and, eventually, homeowners. New Jersey’s PSE&G is making loans to solar customers, and Duke Energy and Edison International have invested in Clean Power Finance, a San Francisco-based firm that has raised half a billion dollars to finance solar projects.

“The industry is divided on how to deal with the opportunity—or threat,” says Nat Kraemer, Clean Power Finance’s founder and CEO. “Some utilities are saying, how do I make money off distributed solar, as opposed to, how do I fight distributed solar.”

Distributed solar—which produces electricity outside the grid—“has become one of the more polarizing topics in the power industry, with some utilities joining the party, some doing just what is legislatively mandated and others remaining reluctant and not being true believers,” according to a new report from Citi Research, Rising Sun: Implications for U.S. Utilities. The report warns the utilities that “solar is here to stay, and very early in the growth cycle in the U.S.”

Until recently, utilities could ignore solar. Although the sun’s rays have been touted as a clean energy solution since Jimmy Carter first installed photovoltaic panels on the White House roof in 1979, solar remains barely a blip in the U.S. power market. In 2012, solar power provided a mere 0.11 percent of U.S. electricity generation, according to the Energy Information Administration, a government agency. By comparison, coal delivered 37 percent, natural gas 30 percent, nuclear 19 percent and wind 3.5 percent. And that solar percentage includes utility-scale projects, like the big solar farms in California and Nevada that feed into the electricity grid, as well as distributed solar.

But the solar industry is growing fast, and much of the growth is distributed solar built “behind the meter”—that is, on commercial and residential rooftops, where electricity from solar panels eliminates the need for power that would otherwise be generated and sold by the utilities. Last year, nearly 90,000 businesses and homeowners installed rooftop solar projects totaling about 1.1 megawatts, roughly the amount generated by a large coal plant. That represented a 46 percent growth over 2011, according to the Solar Electric Power Association (SEPA). By the end of last year, the number of customer-sited photovoltaic systems in the U.S. topped 300,000, the association says.

Most industry experts expect that growth will accelerate as prices for solar continue to fall, to the point where rooftop solar will eventually cost less than the retail price of grid-delivered electricity. According to the Citi Research report, solar is already cheaper than electricity at the plug in several states, including Arizona, and in many countries, including Germany and Spain, where solar subsidies are generous. Last month, Jon Wellinghoff, the chairman of the Federal Energy Regulatory Commission, told GreenTechMedia that “solar is growing so fast it is going to overtake everything...it could double every two years.”

No wonder the utilities are nervous. Just as personal computers threatened the manufacturers of industrial-sized mainframes, and the rapid adoption of cell phones shook up once-formidable landline operators, distributed solar could disrupt the de facto monopoly long held by regulated utilities.

“Big corporations are realizing that they can openly display their commitment to sustainability with solar panels without having to pay any more for electricity,” Crane says.

The regulated utilities say they welcome the growth of rooftop solar, as long as businesses and homeowners who install rooftop panels pay their fair share of the costs of maintaining the electricity grid, which they rely on when the sun isn’t shining. The utilities say solar customers currently benefit from subsidies and regulations, particularly the policy of “net metering,” which requires utilities to buy back excess electricity from rooftop solar systems, at retail prices in some locales.

Arizona Public Service, which has asked regulators to impose higher costs on solar customers, says current rules essentially allow those customers to use the grid for free. As a result, customers who can’t afford solar panels or don’t have a place to put them end up paying higher rates. That, in turn, will help drive more customers to solar, increase the burden on those who don’t have it, and, not incidentally, eat into the utility’s earnings. That’s not a sustainable model for the future, the utility argues.

SEPA, whose members include utilities and solar firms, is trying to help the industries find common ground so both can thrive. “People need to be equitably compensated for the services they are delivering—in both directions,” says Eran Mahrer, executive vice president of strategy and research at SEPA. “At the end of the day, that’s a negotiation.”

But because utilities are regulated, and because regulators in some states, including Arizona, are elected, the argument has turned political. It has also led to some unorthodox alliances.

In Arizona, solar firms formed an advocacy group called Tell Utilities Solar won’t be Killed (TUSK) and hired as chairman Barry Goldwater Jr., a former Republican congressman and son of the 1964 presidential nominee. True to his heritage, Goldwater casts the issue as one of giving consumers “the freedom to make the best choice.” The utilities, he says, “don’t like competition. Competition tends to drive the price down and the quality up.” In Georgia, too, Tea Party conservatives have allied with environmentalists to form a Green Tea Coalition to oppose the local utility, again under the banner of free choice.

But other conservatives, including a group funded by the billionaire Koch brothers, are loudly opposing government support for solar. A Virginia-based advocacy group for senior citizens called the 60 Plus Association has built an Arizona website, and an accompanying web video attack on solar subsidies. The video seeks to link California-based rooftop firms SunRun and Solar City, which are operating in Arizona, to bankrupt manufacturer Solyndra, calling them “connected companies getting corporate welfare.” An APS spokesman told Yale Environment 360 that it was not responsible for the video or any campaign against rooftop solar. But APS has confirmed that its parent company, Pinnacle West Capital Corp., hired Sean Noble, an Arizona political consultant who also has worked for the 60 Plus Association. 60 Plus has received funding from Charles and David Koch, whose conglomerate, Koch Industries, includes fossil fuel holdings.

The fact that organizations funded by the Koch brothers are going after solar subsidies may be the best evidence of all that the industry’s future is bright.