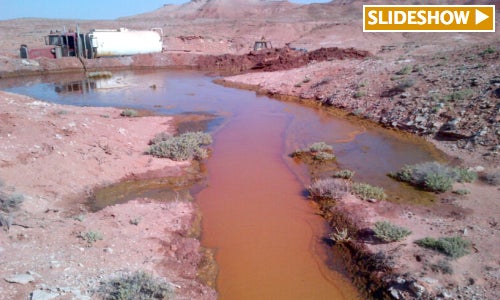 As rain poured on Utah land this past weekend pushing oil about five miles upstream into a wash adjacent to the Green River, it appeared that a Bureau of Land Management assessment of a leak was completely wrong.

A BLM report released a week ago stated that a breached oil well had been contained after the May 21 leak. Now, the federal agency says “intense thundershower activity overcame prevention measures” and, as a result, the U.S. Environmental Protection Agency continues cleanup efforts that could take another week, the Salt Lake Tribune reported.

“This pollution of the Green River could and should have been prevented,” said Zach Frankel, executive director of the Utah Rivers Council. “The fact that the BLM claimed it was contained before it went on to contaminate the Green River with carcinogens is disturbing.”

Initial BLM estimates indicated that the damaged well gushed 80 to 100 barrels of oil per hour for more than 30 hours. Groups like the Utah Rivers Council, the Sierra Club, Living Rivers and the Colorado Riverkeeper believe that amount equals 100,000 gallons of crude oil into a wash adjacent to the river. It is unknown how much of the oil entered the river, which is the largest tributary to the Colorado River, the main source of drinking water for about 35 million people. It is also the habitat of four endangered fish species.

Officials told Utah’s KSL that the oil’s contact with the river was “minimal.”

The spill is the third to occur in the state in just three months. Utah is now ranked 11th in the country in terms of crude oil production. The state isn’t trying to slow its oil boom down, either. The annual Utah Governor’s Energy Development Summit begins June 3 and is typically an effective recruiting tool for new development. Additionally, thousands of proposed new wells are awaiting approval.

“It’s unlikely that [Gov. Gary R. Herbert] and his friends from the fossil fuels industries will be talking about another oil spill in Utah,” Tim Wagner of the Sierra Club said. “Rather, we can be sure that they will be discussing additional ways that they can tap into more of Utah’s black gold, including plotting to take away our public lands.”

Environmentalists are worried about what the miscalculation means for the future.

“With the energy policies of our state leaders, lower basin residents can see the future, which means more pollution in their taps,” said John Weisheit, conservation director of Living Rivers and Colorado Riverkeeper.