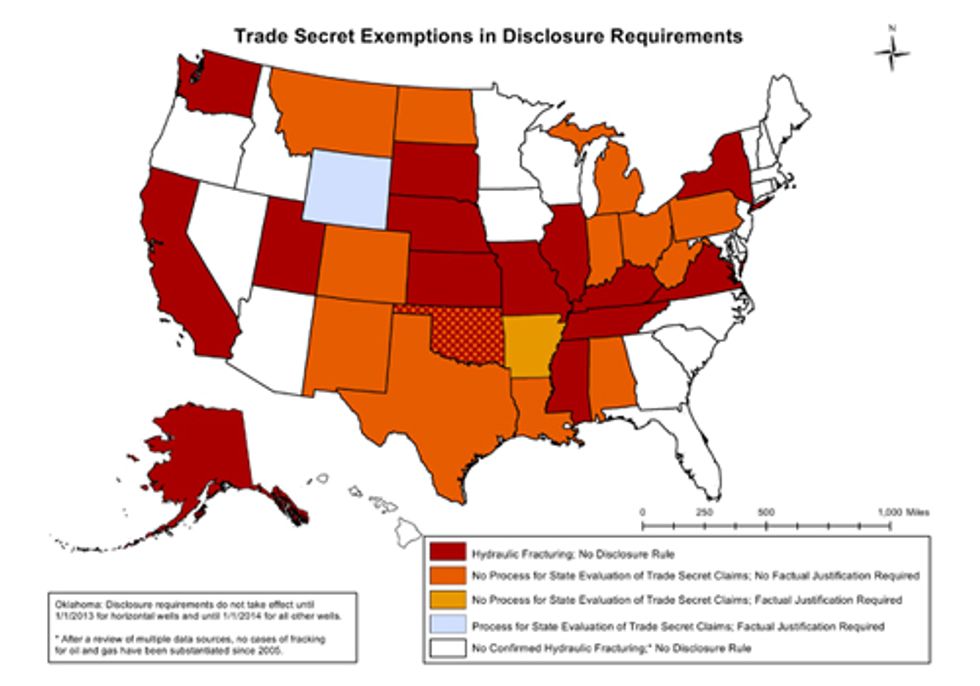 A recent investigation by EnergyWire found that when companies provide information on the chemicals they use to frack wells, most of the time they keep at least one chemical secret. Sixty-five percent of disclosures made by oil and gas companies leave out information about one or more fracking chemicals that the company claims to be confidential, according to the EnergyWire article.

Many of the chemicals that fracking companies admit to using are toxic, carcinogenic, combustible or all of the above. But those are just the chemicals we know about. Unfortunately, we currently have no way of knowing the risks posed by the chemicals they are keeping to themselves. The public deserves to know about the chemicals that are being trucked through their neighborhoods, stored near their homes and schools and injected at high pressure near their drinking water sources. But unfortunately, due to the Halliburton Loophole—a Bush/Cheney Energy bill that exempts natural gas drilling from the Safe Drinking Water Act—companies are exempt from disclosing the chemicals used during hydraulic fracturing.

Keep in mind that the article only looks at the wells where the companies have disclosed chemicals in the first place. There are many more wells where we know nothing about what’s being used. In some states, disclosure is entirely voluntary and it is left to companies to decide whether to disclose any of the chemicals they use. Fourteen states require at least some disclosure of fracking chemicals. But an NRDC analysis released in July found that, while there was fracking in at least 29 states, only two states require companies to provide factual justification to keep a chemical secret (see map below).  Most states leave it up to the company to decide if a chemical should be kept confidential. That’s a loophole big enough to drive a truck through—a truck full of fracking chemicals.