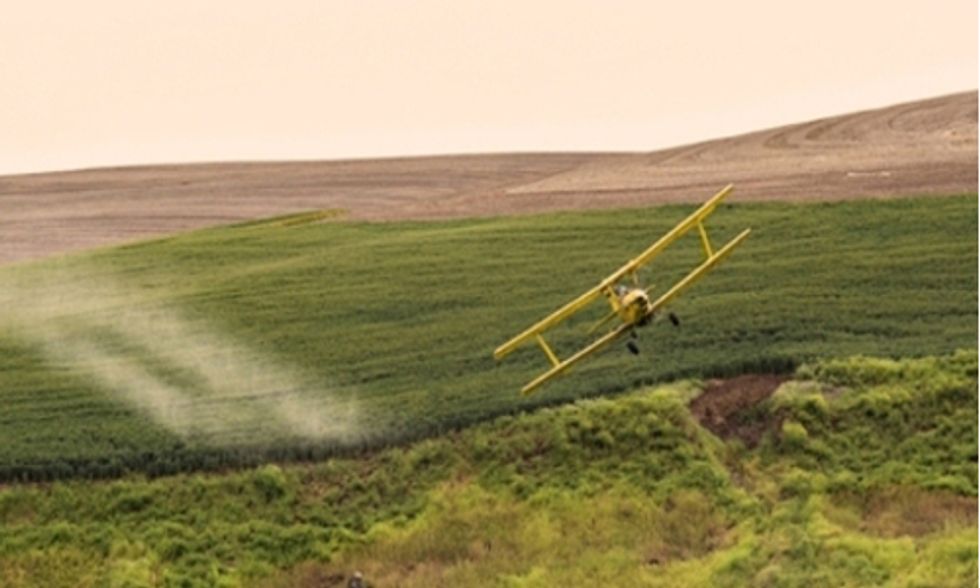 Yesterday, the U.S Department of Agriculture (USDA) gave its final approval to Dow AgroSciences Enlist brand corn and soybeans, genetically engineered to withstand both glyphosate (found in the widely used Roundup weed killer) and massive amounts of 2, 4-D, a key substance in Agent Orange—the defoliant used in Vietnam found to cause a constellation of health problems and birth defects.

They did so despite hundreds of thousands of comments and petition signatures from farmers, health professionals and members of the public urging them not to approve the new seeds, and despite acknowledging that approval could increase use of 2, 4-D by as much as 600 percent and possibly affect nearby crops such as tomatoes and grapes not engineered to resist the chemical.

“Yesterday the USDA ignored public opposition and its responsibility to protect public health and agriculture,” said Wenonah Hauter, executive director of Food & Water Watch. “The approval of 2,4-D ready crops is one of the most negligent decisions that the USDA has made in the nearly twenty years since genetically engineered crops have been on the market."

As farmers have been encouraged to devote more and more acres to single crops (aka "monocropping") and use huge doses of glyphosate-based herbicides to deal with weeds, so-called "superweeds" have cropped up that are resistant to the herbicides. But many farmers and food safety advocates fear that increased applications of more powerful herbicides will only cause more resistant weeds to appear.

"After watching Roundup-ready crops quickly lose their utility by giving rise to Roundup-resistant superweeds, it is baffling that the USDA could not see that this approval of a new herbicide-tolerant crop system would be a futile, short-lived attempt at weed control which will only make things worse in a matter of years," said Hauter.

Andrew Kimbrell, executive director of Center for Food Safety, agreed, saying “This is not the solution to our superweed problem and will only spur the evolution of yet more herbicide-resistant weeds. We need a new direction for our agricultural system, not increased reliance on chemicals. 2,4-D resistant crops pose a monumental threat to our nation’s agricultural, environmental and human health. With this approval comes millions of more pounds of toxic herbicides dumped onto our land; it’s an unacceptable outcome. Center for Food Safety will pursue all available legal options to stop the commercialization of these dangerous crops.”

"The USDA's approval of these crops is proof that today's destructive industrial agriculture model, based on a system of GMO monocrops, is a failure," said OGA's international director Ronnie Cummins. "Farmers have been sold the lie that they can increase yields and prevent crop failure from weeds by buying Monsanto's and Dow's GMO seeds and dousing them in toxic poisons, also manufactured and sold by Monsanto and Dow. But just as scientists predicted, these 'miracle' crops are evolving to resist the poisons thrown on them, causing the USDA and the EPA to approve increasingly toxic poisons to fight increasingly resistant weeds. Where does the escalation end?"