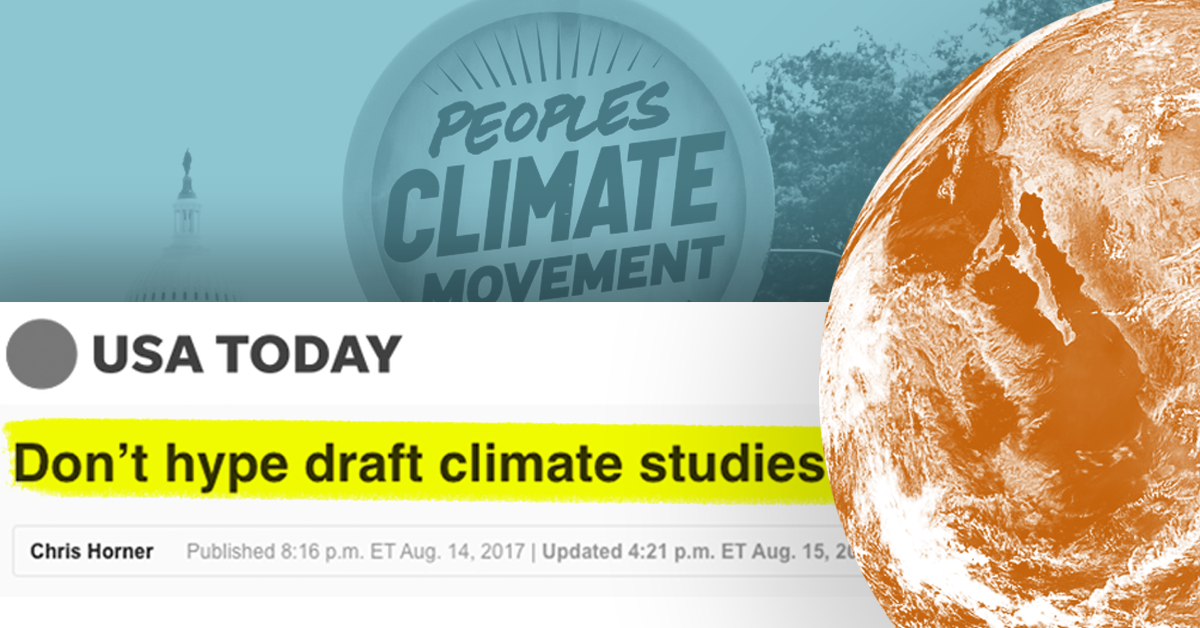 USA Today has once again invited a climate denier onto its opinion pages to cast doubt on mainstream science, and the paper failed to disclose the author’s numerous industry ties.

On Aug. 14, USA Today’s editorial board wrote a well-reasoned editorial highlighting the scientific consensus around climate science, titled Case for climate change grows ever stronger. The board noted that the findings of a draft federal climate report provided “ever more troubling evidence” that “humanity is responsible for a dangerously warming planet.”

But on the same day, the newspaper also published an op-ed by Chris Horner of the Competitive Enterprise Institute that disparaged the draft report, dismissing it as the work of “the career (and holdover) federal employee ‘resistance'” and part of the “big business” of climate change:

Another week of the Trump presidency, another bout of fevered reporting on claims promoted by the career (and holdover) federal employee “resistance.” But particularly when it comes to climate change, it seems the ordinary way of doing things is simply too much to ask.

“Climate” has become very big business since Congress first requested quadrennial “National Assessments on Climate Change” in 1990. A big part of that business is government. Another is the news media. Both of which thrive on the end-of-days narrative.

The two met this week to ride the latest national assessment, a draft of which prompted excited reportage and a particularly embarrassing correction by The New York Times.

Readers would have taken Horner’s attack with more than a grain of salt had USA Today disclosed his deep ties to oil and coal companies. He claimed that climate change has become “big business,” but Horner’s own work has been funded by big fossil fuel corporations for years. Horner has gotten payments from Alpha Natural Resources, one of the largest coal companies in the U.S., and has numerous ties to the coal industry. And Horner’s employer, the Competitive Enterprise Institute, has received more than $2 million from ExxonMobil over almost two decades, as well as funding from Marathon Petroleum, Texaco, the American Petroleum Institute, the American Coalition for Clean Coal Electricity, American Fuel and Petrochemical Manufacturers, Koch Industries, the David H. Koch Charitable Foundation and the Charles G. Koch Charitable Foundation, among others.

In his USA Today op-ed, Horner provided no evidence to support his claim that writing reports on climate change is “big business.” According to a ProPublica article, the draft federal climate report was authored by “a mix of government and academic researchers,” and lead author Katharine Hayhoe noted that the academic contributors were not paid for their work. Horner also didn’t give any compelling evidence or argument to dispute the findings of the draft report.

So then why did USA Today publish Horner’s op-ed? The paper’s editorial board has a long-standing practice of publishing “opposing view” counterpoints to its editorials. As Media Matters has documented on multiple occasions, this “opposing view” format leads the newspaper to publish climate denial and misinformation, and go out of its way to find authors willing to dispute the well-established science of human-caused climate change.

A 2016 Media Matters study examining four major newspapers’ opinion pages found that USA Today published six opinion pieces featuring climate denial or misinformation from January 1, 2015, through August 31, 2016—five of which were “opposing view” responses to editorials. Only The Wall Street Journal, which is notorious for pushing climate denial on its opinion pages, published more. All six of these misleading climate opinion pieces were written by individuals with fossil fuel ties, but USA Today did not disclose any of those ties to readers.

The “opposing view” format is all the more dangerous now that U.S. Environmental Protection Agency administrator and climate denier Scott Pruitt is calling for a “red team” of climate deniers to debate mainstream “blue team” scientists. The Trump administration is even reportedly considering having a “red team” vet the draft climate report that Horner criticized. This sort of approach should not be getting an endorsement from the most widely read newspaper in the U.S.