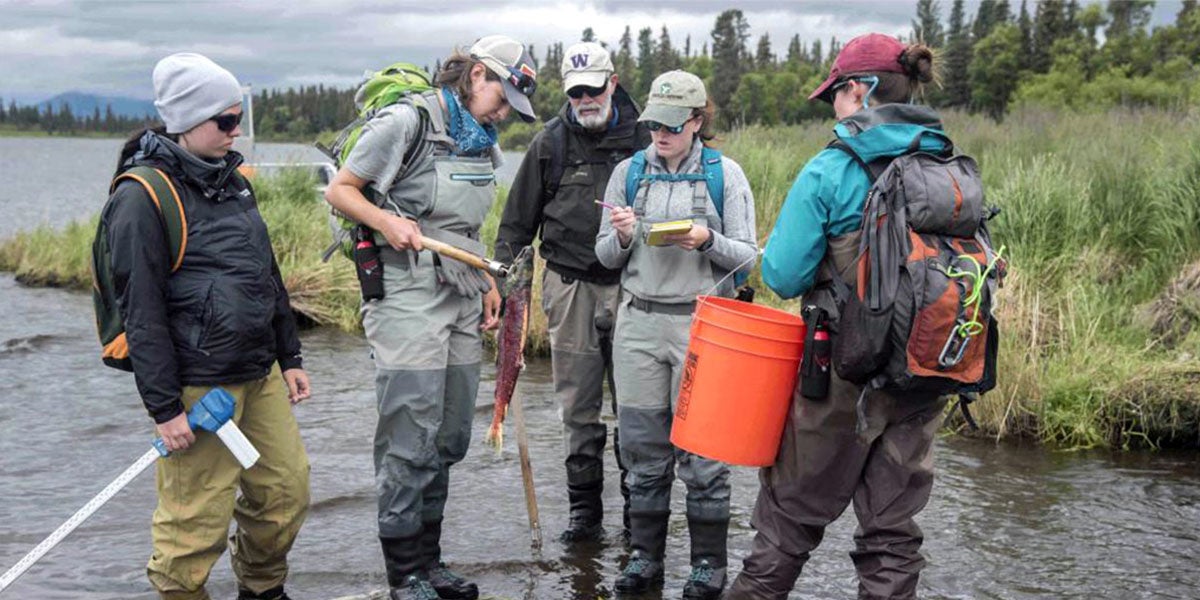 At the height of the Alaskan summer, a troupe of students hiked up the middle of a shallow creek. Undergraduates and grads from the University of Washington, the University of Alaska Fairbanks and Kamchatka State Technical University in eastern Russia carried handheld clickers to count the multitudes of salmon thrashing upstream to spawn. Some of the students spoke English, others Russian, but they all came to see salmon: fish that their two countries share.

Five species—sockeye, coho, pink, chum and chinook salmon—live in the freezing ocean between the U.S. and Russia, and swim up rivers in both countries to reproduce. Even though some fish spawn in Alaska and others in the Far East, they ultimately seed the same stock in the Bering Sea. It sits at the top of the North Pacific, the largest, most valuable and most abundant wild Pacific salmon fishery in the world.

Salmon are enormously economically important to both Russia and the U.S. They contributed $406 million to Alaska in 2016, according to the state’s Department of Fish and Game. And in Kamchatka, salmon in the Kol Refuge pull in $981 thousand to $3.7 million annually, with ecosystem services from the fish and their habitat estimated at $784 million to $2.38 billion, according to the Wild Salmon Center in Portland, Oregon.

Despite so much on the line, Russia and the U.S. rarely coordinate management efforts and research is largely siloed, said fisheries ecologist Megan McPhee, an associate professor at the University of Alaska, Fairbanks. “Because of the language barrier,” she said, “there’s a lot of research that goes on without the other side knowing about it.”

That’s where the students come in. From June through August, budding fisheries scientists from both sides of the Pacific live and study at a rustic field camp near Bristol Bay. It’s part of a summer field course, taught jointly by the University of Alaska Fairbanks, the University of Washington and Kamchatka State Technical University, and championed by the World Wildlife Fund in Anchorage. Hiking up creeks to count salmon is one way to learn the ropes, and to lay the foundation for future collaboration.

“The idea is to build greater understanding of the similarities and differences in management on both sides of the Bering Sea,” McPhee said. It’s “an opportunity to learn from each other.” 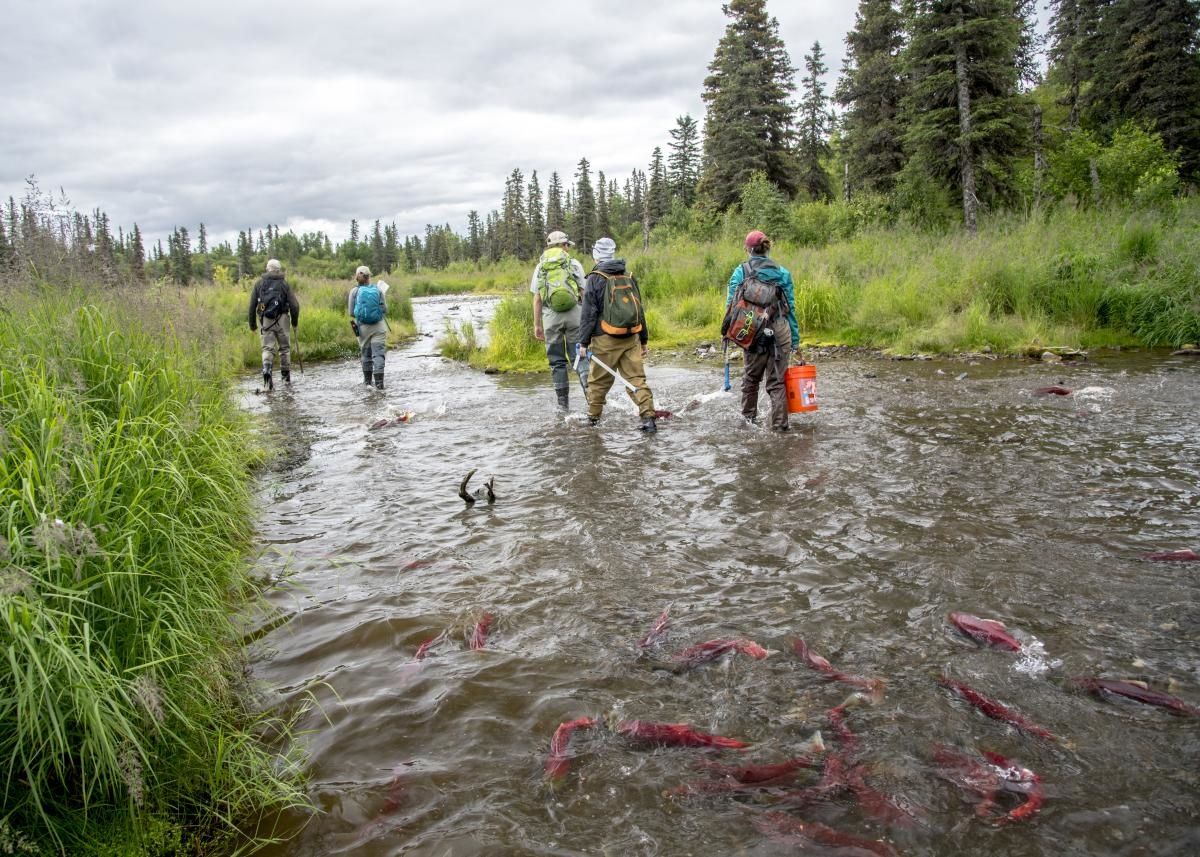 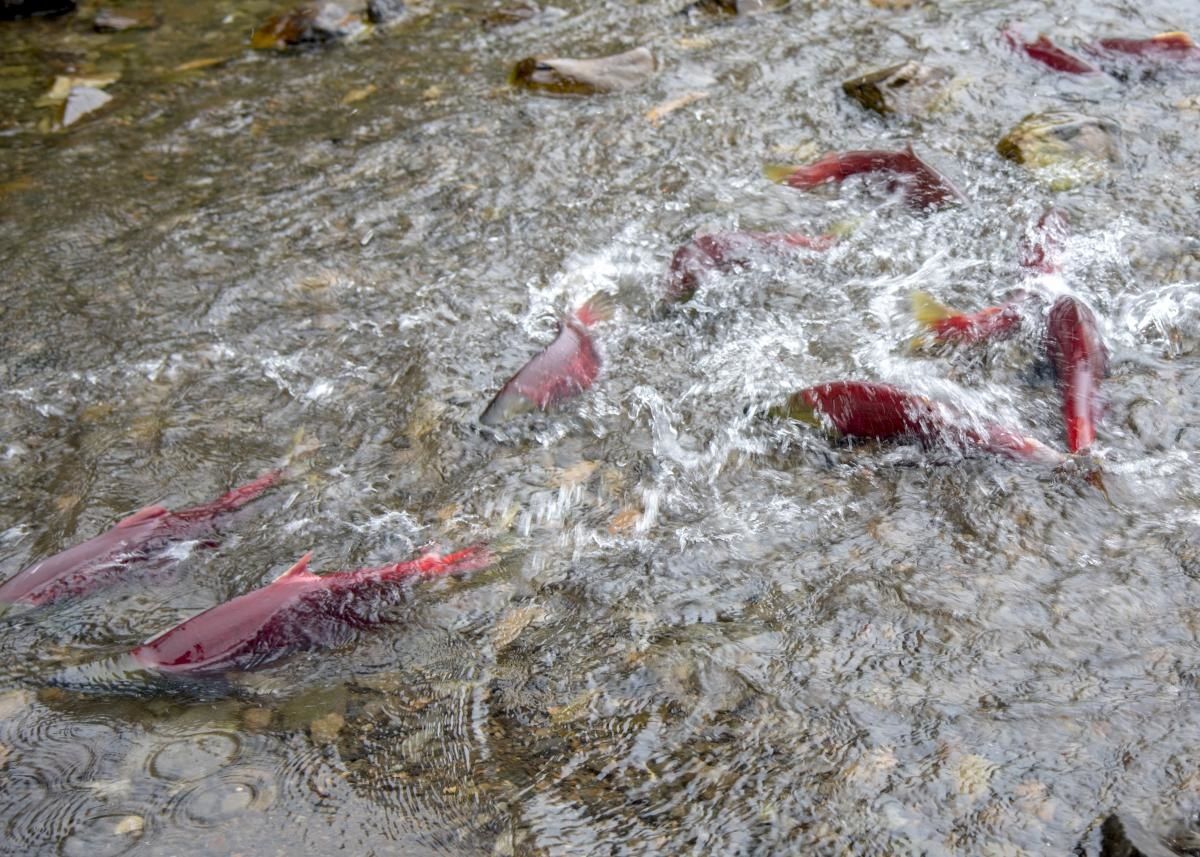 Students and professors walk Hansen Creek, a tributary of Lake Aleknagik near Bristol Bay, to count and measure living and dead salmon.John Simeone on behalf of WWF

There is plenty to learn on both sides.

“The Russians have a lot to offer,” said Milo Adkison, a fisheries professor at the University of Alaska, Fairbanks who teaches the field course. “They’re excellent naturalists and do a lot of research on salmon,” which is often complimentary to research in the U.S., he said. For instance, Russian scientists were the first to realize that steelhead and rainbow trout can interbreed, even though steelhead spend their adult lives at sea, while rainbow trout live in fresh water.

Russia, too, might learn from Alaska’s model of salmon management. Bristol Bay saw the largest sockeye salmon run in its 125-year commercial fishing history this summer. “I’d argue that means our methodology is pretty successful,” said biologist Tim Sands, who manages the salmon fishery on the west side of Bristol Bay. “I think a lot of people look to the way we do things here, because it’s working.”

When students come over from Kamchatka, they also get an education in Alaska’s salmon culture, which borders on obsession. Salmon festivals punctuate the summer, and fish motifs feature heavily in local art. “Obviously it’s a source of food and income,” McPhee said, “but I think it’s also tied up in the identity of many Alaskans.”

The same is not true across the Bering Sea, she said, where salmon are less of a touchstone, likely because Kamchatka was historically a Soviet military outpost, and even today people tend to keep to the city. Yet, coastal far-eastern Russians and Alaskans face parallel challenges. They both have abundant salmon habitats threatened by mineral and fossil fuel development, and they’re both limited by the language barrier. The hope for Russian and North American students is a future that embraces their common ground. 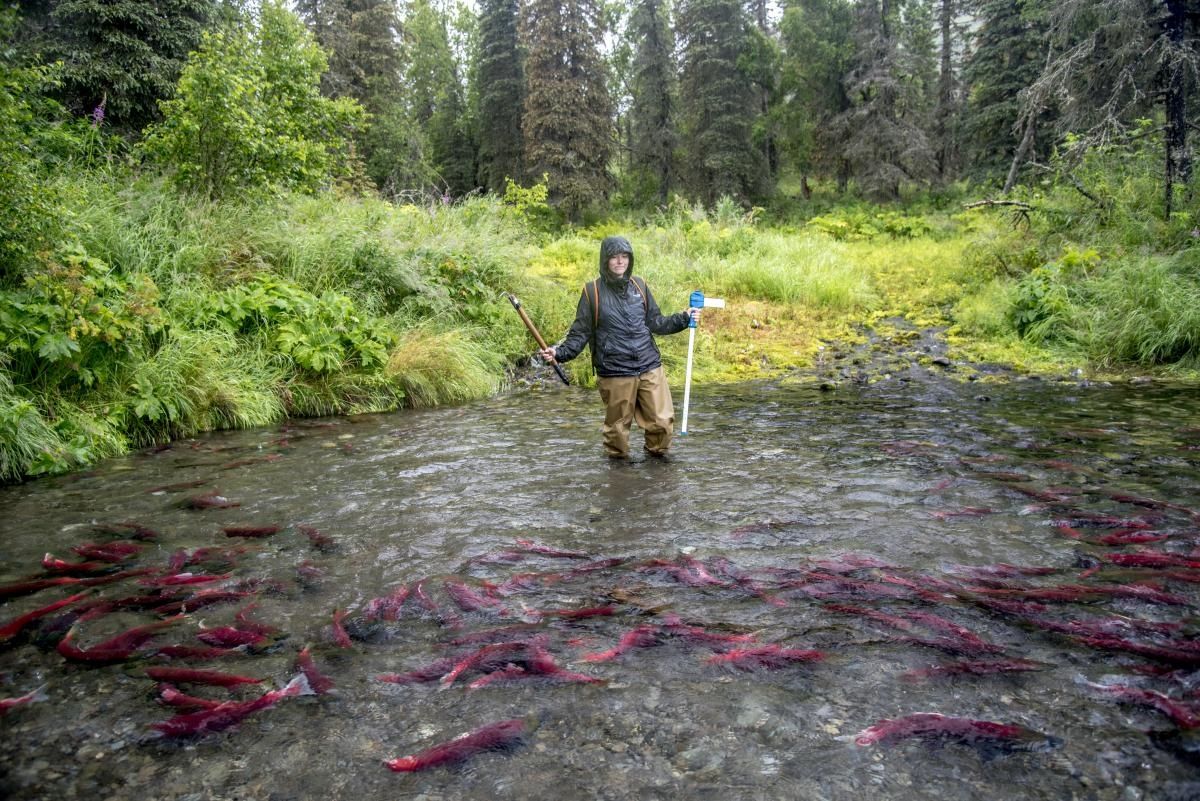 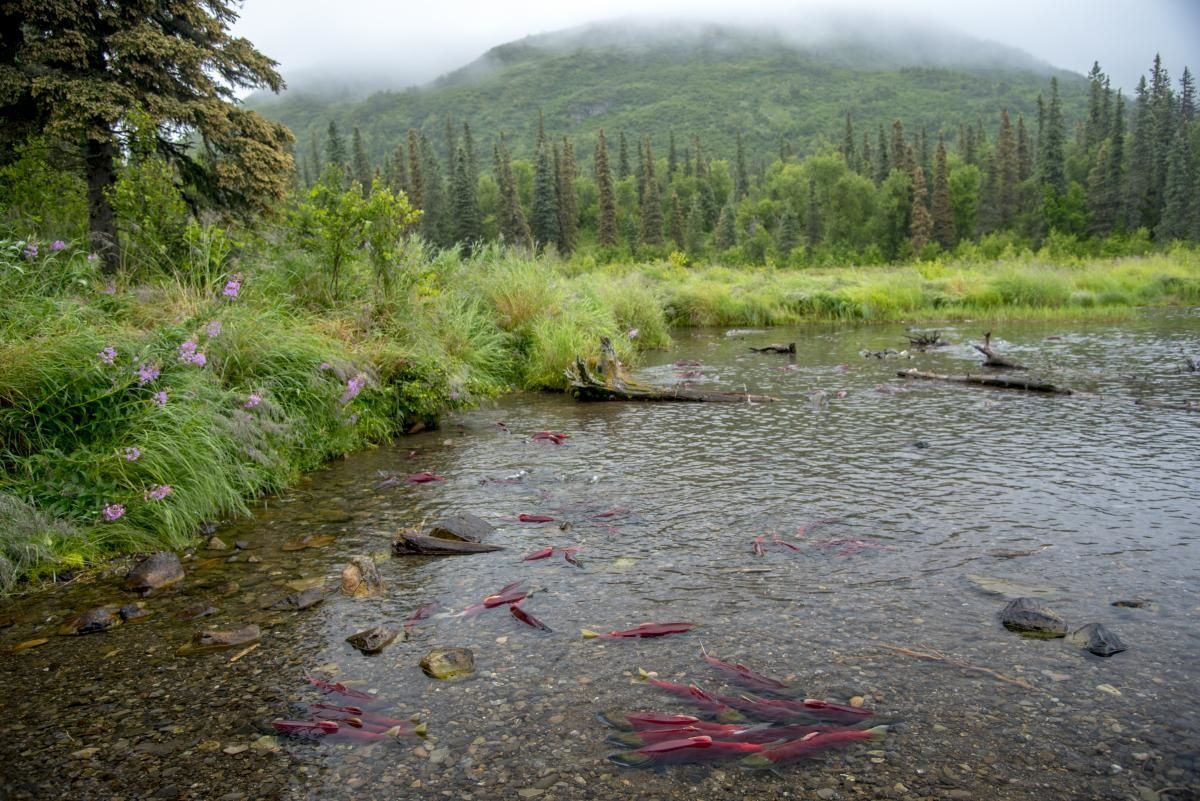 Elena Zhelezniakova, an undergraduate at Kamchatka State, encircled by sockeye (top). The fish swim up Hansen Creek in summer. John Simeone on behalf of WWF

The University of Washington and University of Alaska have offered field courses near Bristol Bay for years. But it’s only since 2016, with the help of funding from the World Wildlife Fund, that they’ve brought in students from Kamchatka. A handful have spent summer weeks living in bunk houses, attending lectures and field trips and working through homework assignments with U.S. peers.

Biologist Sands, who oversees the local salmon fishery, occasionally guest lectures for the field course, but isn’t formally affiliated with the program. He sees potential for students to learn from one another, and one day, to build better fisheries. “We do things the way we do things, and we don’t necessarily change,” Sands said. “But when you interact with professionals from other places … you can get ideas about how maybe we could do something a little different.”

Students from both countries can be shy at first, especially with language skills, said John Simeone with the World Wildlife Fund in Anchorage. Walls crumble as they work through homework assignments and shared meals, he said. “Early on the barriers seem hard, and by the end they’re hugging each other and sad to see each other go.”

The hope is that friendships evolve into professional collaborations, as participants grow into leaders of salmon conservation. McPhee and a professor from Kamchatka are already joining forces on an educational curriculum that includes the most important salmon studies from both sides of the Bering Sea.

For students hiking Alaska’s shallow creeks, their pant legs sopping, the summer was an immersive education. Salmon was just one part of it. Knowingly or not, they were also laying the foundation to bridge the divide across the Bering Sea. 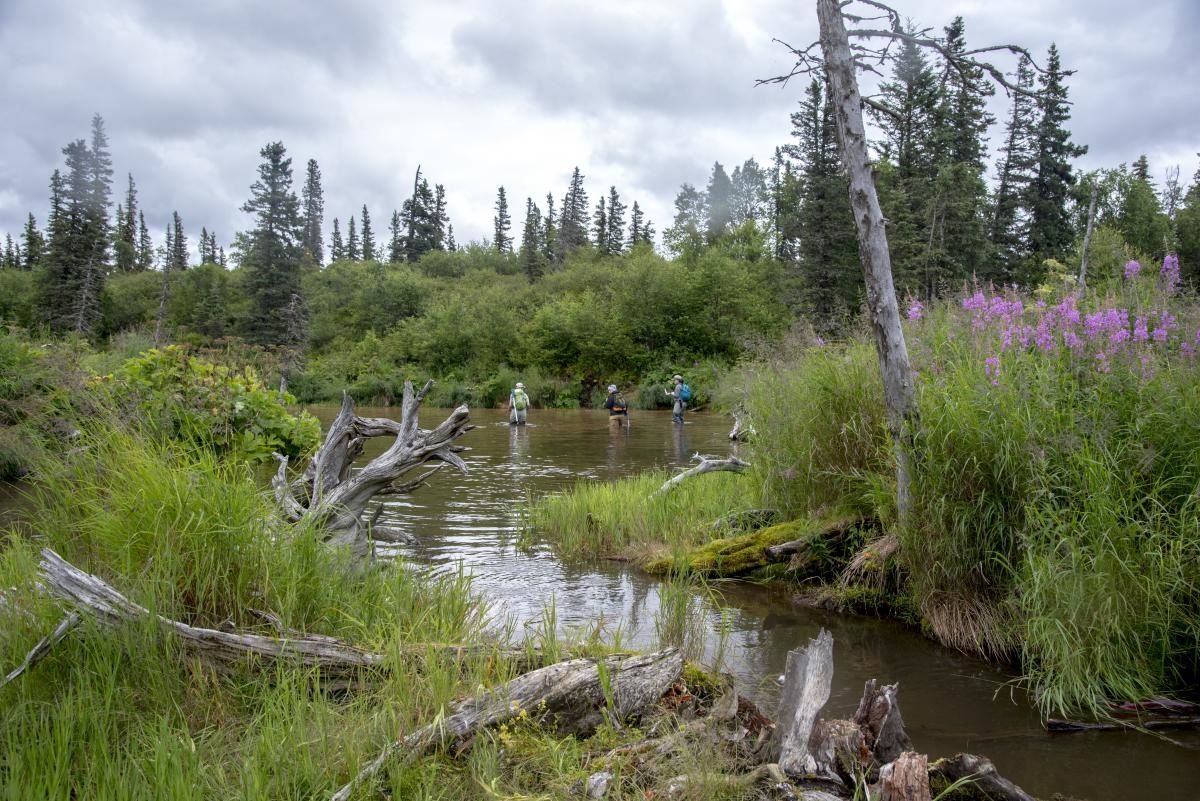 Students wade into a pool of the creek, which can be as shallow as ankle deep, to count and measure living and dead salmon.John Simeone on behalf of WWF