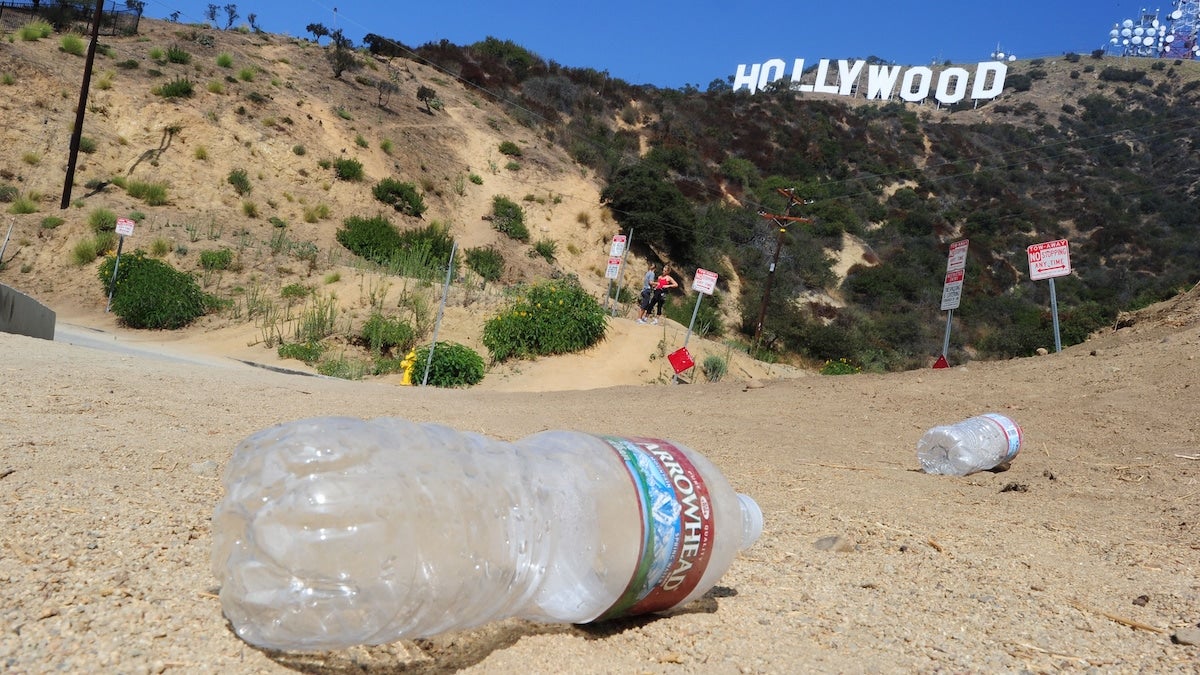 Plastic pollution at a popular viewing site for the Hollywood Hills in California. ROBYN BECK / AFP via Getty Images

More than 60 major brands, government agencies and nonprofits are coming together to create a circular economy for plastics in the United States.

The U.S. Plastics Pact, launched Tuesday, unites major producers like Coca-Cola, Nestlé and Unilever United States with environmental advocacy organizations like Ocean Conservancy and the World Wildlife Fund around a series of goals to reduce single-use plastics by 2025.

“Plastic pollution is a global crisis that needs local solutions, and the United States is one of biggest opportunities where regional interventions can result in transformative change around the world,” WWF head of Plastic Waste and Business Erin Simon said in a press release. “To do this, WWF sees the U.S. Plastics Pact as the linchpin for uniting the critical stakeholders — industry leaders, waste management systems, and policymakers — under a common vision and action plan for meaningful, measurable impact.”

Today, along with @RECYPartnership and @circulareconomy, we’re thrilled to announce the launch of the U.S. Plastics Pact to fundamentally rethink the way we design, use, and reuse plastics. #USPlasticsPact Learn more about our goals and partners: https://t.co/4tGV2K040w pic.twitter.com/ZFqlKniueQ

That action plan is based around the following four goals:

The U.S. Plastics Pact is the latest in the Ellen MacArthur Foundation’s global network of plastics pacts, which have so far launched in Chile, France, the Netherlands, Portugal, South Africa and the UK, in addition to a wider European Plastics Pact, the foundation explained.

The UK Plastics Pact, for example, launched in April 2018 with similar goals for reducing single-use plastic packaging by 2025.

“This is an exciting step on the journey towards a circular economy for plastic in the United States, one that keeps plastic in the economy and out of the environment. This effort will not only help to create solutions in the US, but across the world, as part of our global network of Plastics Pacts,” New Plastics Economy Lead at the Ellen MacArthur Foundation Sander Defruyt said.

“We are looking forward to working with all those involved to drive real change, by eliminating problematic and unnecessary plastic items, innovating to ensure all plastic packaging is reusable, recyclable, or compostable, and circulating it in practice. We encourage others to join us on this journey towards a United States free of plastic waste and pollution.”

Delighted to launch the U.S. Plastics Pact together with @RECYPartnership & @WWF today at #circularity20!

Pact #8 in the Plastics Pact network!https://t.co/zkpsrYaQjy

The pact was announced at a virtual event called Circularity20 dedicated to uniting more than 10,000 professionals in sharing information and resources to develop a circular economy. The pact is being led by the Recycling Partnership, a nonprofit that works to improve recycling in the U.S., with the support of WWF.

“As the lead organization that engages the full supply chain to advance circularity in the U.S., it’s a natural fit for The Recycling Partnership to further collaborative action with other industry leaders to create substantial, long-lasting change for the betterment of our planet,” Recycling Partnership VP of Circular Ventures Sarah Dearman said in a press release. “The results from the U.S. Plastics Pact’s efforts to advance packaging, improve recycling, and reduce plastic waste will benefit the entire system and all materials.”

Have you heard about the #USPlasticsPact yet? Check out how we’re collaborating with other organizations to create one national strategy and realize a circular economy for plastic, in which it never becomes waste or pollution. https://t.co/rkXUgn3avD pic.twitter.com/gqBZYNqquT

The U.S. produced the second-most amount of plastic in 2010, at 38 million tonnes (approximately 42 million U.S. tons), according to Our World in Data. It ranked behind only China, which produced nearly 60 million tonnes (approximately 66 million U.S. tons). It also ranks high in terms of the amount of plastic produced per person, at 0.34 kilograms per person per day (approximately 0.75 pounds per person per day). Only 8.4 percent of the plastics discarded in the U.S. in 2017 was recycled, according to the U.S. Environmental Protection Agency (EPA).