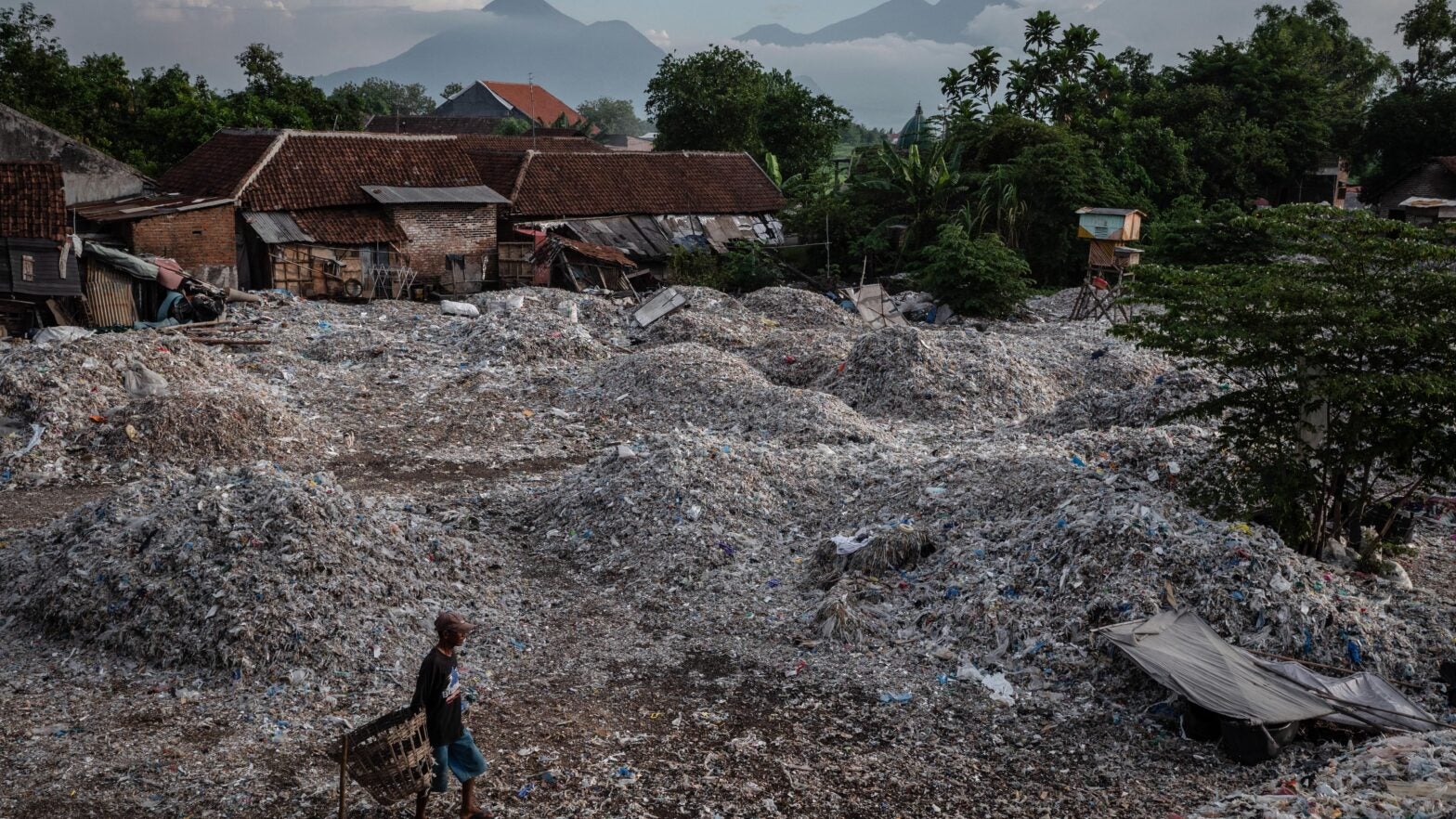 A man carries a bucket of plastic waste at an import plastic waste dump in Mojokerto, Indonesia, on December 4, 2018. Ulet Ifansasti / Getty Images

Editor’s note: This article has been updated with correspondence from the Basel Action Network and the Center for International Environmental Law

The majority of the world is working together to reverse the massive plastic pollution problem. But, the world’s leading producer of plastic waste, the U.S., isn’t on board and isn’t following the rules.

In 2019, 187 countries voted to amend the 1989 Basel Convention to include plastic waste in the definition of hazardous materials and to strictly limit how that trash is traded internationally. The binding framework aims to make global trade in plastic waste cleaner, more transparent and better regulated. It went into effect on Jan. 1, 2021.

According to Jim Puckett, executive director of the Basel Action Network (BAN), a nonprofit organization that lobbies against the plastic waste trade, the motivation was to use the existing tool of the Basel Convention to “grapple with the lifecycle plastics crisis we are in.”

UN officials hoped the agreement would curb ocean plastic within five years. The only free trade that is allowed under the amended convention is the legitimate recycling of plastics that are high-quality, clean and sorted. Anything else would be banned from trade, a move hoping to prevent the incineration, dumping and dirty or incomplete recycling that currently is used to process lower quality plastics, Puckett told EcoWatch.

Supporters expected the implementation of the new regulations to curb the “uncontrolled trade” in low-quality and hard-to-recycle plastic waste, the majority of which currently results from trash collected in the global North being exported and then “recycled” in a “substandard, incomplete and polluting” manner in the global South, Puckett said. They also believed the convention would level the industry’s global playing field by allowing developing nations such as Vietnam and Malaysia to refuse such plastics before they were shipped from developed nations, a UN transboundary waste chief told The Guardian.

At the start of the year, when the new rules were just being implemented, the fact remained that the U.S. had not ratified the amendment to become a Party to the Basel Convention despite producing most of the world’s plastic waste. Proponents held that the amendment would still apply to the U.S. anytime it tried to trade plastic waste with any of the participating 187 countries, many of which are poor and developing nations, CNN reported.

According to David Azoulay, senior attorney with the Center for International Environmental Law, participating nations are prohibited from trading waste with countries that have not ratified the Basel Convention, including the U.S. This creates an effective ban on plastic waste trade between the U.S. and most of the world.

“Legally, there’s nowhere waste from the U.S. can go, so right when it gets on the high seas, it becomes illegal,” Azoulay told EcoWatch.

Despite these new rules, U.S. Customs data from January shows that optimism about the convention’s effectiveness may have been premature. According to The New York Times, American exporters continue to ship plastic waste overseas, despite the fact that receiving countries have agreed, per the Basel Convention, not to accept it. In fact, the new report showed that American exports of plastic scrap to poorer countries have barely changed and that overall exports of scrap plastics even rose.

The Times reported that environmental watchdog groups viewed this as evidence that exporters are either ignoring the new rules or following their own interpretations. American companies are justifying waste shipments as being legal even though recipient countries legally can’t accept them. The former is using the logic that because the U.S. never ratified the global ban, the rules don’t apply to originating shipments.

“The U.S. is walking a very fine line here,” Azoulay explained. “Even though it is not technically illegal to send the plastic waste, allowing its traders to send waste knowing there is nowhere for it to be accepted is a form of defeating the object and purpose of the convention. The U.S. has an obligation under international law not to do this because it is a signatory to the convention, even if it has not yet ratified. Doing so is a lack of respect of international law by the U.S. and a misinterpretation or evasion of the rules.”

The Maritime Executive also noted that America’s plastic waste shipments continue to be associated with “uncontrolled dumping” in developing countries and that much of the plastic waste collected in the U.S. under the guise of recycling actually ends up in overseas landfills and the oceans. In fact, a new Woods Hole study found that the U.S. is likely the world’s third-largest source of ocean plastic, not just because it is the world’s largest producer of plastic waste, but also because recyclables being sent to the developing world are often mishandled and discarded into the ocean.

“This is our first hard evidence that nobody seems to be paying attention to the international law,” Puckett told The Times regarding the new trade data. “As soon as the shipments get on the high seas, it’s considered illegal trafficking. And the rest of the world has to deal with it.”

Azoulay offered up some stopgap solutions. Because waste is hard to send back once accepted, recipient countries need to be “more forceful” in border control and enforcement of what comes in, he said. The illegal traffic in low-quality plastics must be prosecuted as criminal.

On the U.S. side, the easy solution would be to prevent the shipments from going out in the first place, Azoulay added, and for the U.S. to respect international law.

He and Puckett both have called upon the Biden Administration to ratify the Basel Convention now, which would create the obligation for the U.S. to criminalize illegal trading. This also, ironically, would facilitate the trade of legitimate U.S. waste, Azoulay said. It would just need prior informed consent before sending and could only send high-quality, recyclable plastics.

As a more permanent solution, Azoulay and Puckett both also advocated for a mindset shift by consumers and manufacturers. Puckett said, “We will never recycle our way out of the plastic lifecycle crisis. We need to all stop using single-use plastic in our lives and demand that our markets also reduce the consumption and use of single-use plastics (such as packaging) as soon as possible.”

Azoulay agreed, saying, “We’re talking about waste trade because we’re producing waste….The less plastic you use, the less ends up as waste, the less has to be sent or managed, and the less you have to dump. This works for everyone.”