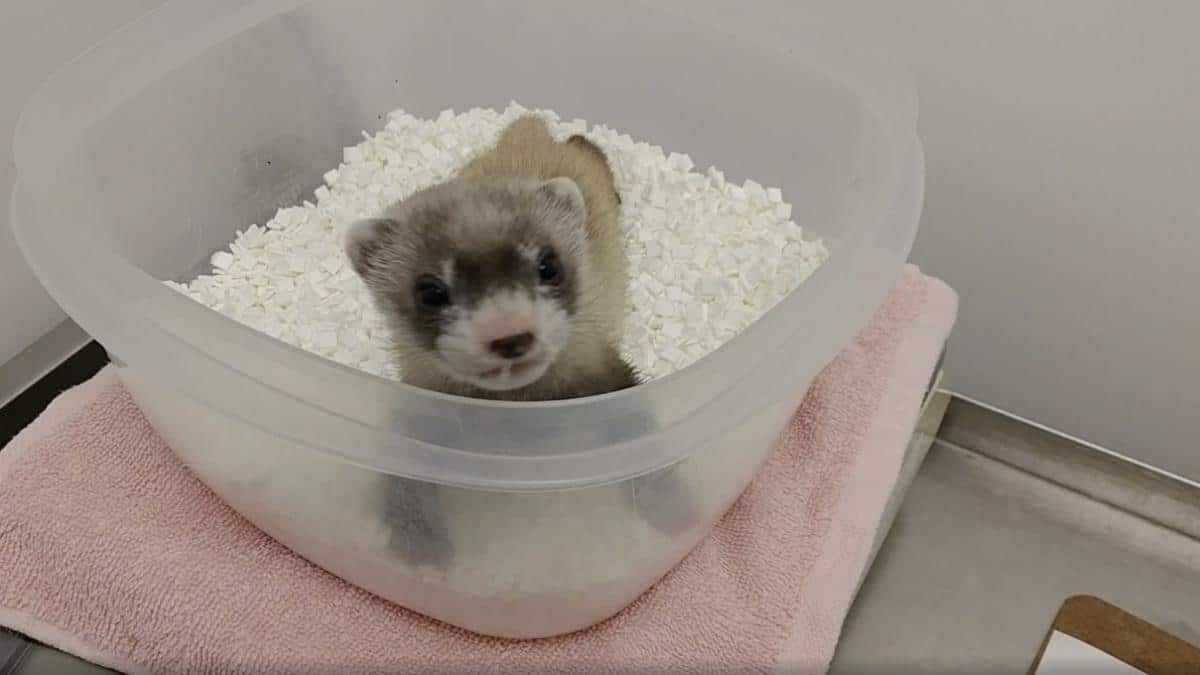 Elizabeth Ann is a black-footed ferret and the first endangered species in the U.S. to be cloned. USFWS Mountain-Prairie / Flickr

In a remarkable first, scientists have cloned a U.S. endangered species.

The clone in question is a black-footed ferret named Elizabeth Ann, and her lineage could bring much needed genetic diversity to the imperiled species.

“[I]t was a commitment to seeing this species survive that has led to the successful birth of Elizabeth Ann,” Ryan Phelan, the executive director of biotechnology conservation nonprofit Revive and Restore, said in a Fish and Wildlife Service (FWS) press release. “To see her now thriving ushers in a new era for her species and for conservation-dependent species everywhere. She is a win for biodiversity and for genetic rescue.”

Cutting-edge science and a blast from the past! Meet Elizabeth Ann. She’s the first-ever cloned black-footed ferret, created from the frozen cells of a ferret that died more than 30 years ago: https://t.co/PJNo7NaFhV

Check the thread for more about Elizabeth Anne! pic.twitter.com/0i85mv9FgH

Elizabeth Ann’s birth was a joint effort from FWS, Revive and Restore, ViaGen Pets and Equine, San Diego Zoo Global and the Association of Zoos and Aquariums. She arrived on Dec. 10, with the birth first announced on Thursday.

The history of the black-footed ferret makes her birth an especially important milestone. The species once lived throughout the U.S. West, FWS recovery coordinator Pete Gober told The New York Times. But their numbers dwindled as their primary prey, prairie dogs, also declined due to habitat loss, poison and disease. At one point, scientists believed the black-footed ferret to be extinct.

“We thought they were gone,” Gober told The New York Times.

That changed in 1981, when a ranch dog named Shep dragged one back to his owners’ home in Wyoming. However, disease wiped out much of the newly discovered ranch population. The FWS captured 18 ferrets for a breeding program, but all of the ferrets they have bred and released since have come from just seven parents.

That’s where Elizabeth Ann fits in. She is a clone of Willa, one of the last wild-caught black-footed ferrets whose genes were never passed on, according to FWS. However, they were preserved by the San Diego Zoo Global’s Frozen Zoo in 1988, making Elizabeth Ann’s birth possible.

“With these cloning techniques, you can basically freeze time and regenerate those cells,” Gober told The Associated Press.

Scientists determined that her genome had triple the unique variations of the current ferret population, meaning that Elizabeth Ann’s descendants could play a role in boosting the species’ genetic health, according to FWS.

That won’t happen right away, The New York Times reported. First, Elizabeth Ann will be joined by other Willa clones, as well as clones of a male named Studbook Number 2. The clones will breed, while their offspring will be interbred with wild ferrets. Scientists need to make sure that none of the mitochondrial DNA from the clones’ surrogate mother, a domestic ferret, is passed on.

Cloning, which involves copying the genes of one plant or animal to make a new one, is emerging as a conservation strategy for imperiled species. Viagen, a Texas-based company that helped clone Willa, also cloned a Przewalski’s wild horse last summer, The Associated Press reported. The Przewalski is a Mongolian horse species whose population of around 2,000 is descended from only 12 animals.

Cloning could also recover extinct animals. Ben Novak, Revive and Restore’s lead scientist, wants to bring back the passenger pigeon, and the nonprofit is also looking into cloning a wooly mammoth. Some conservationists argue that these efforts take funding away from protecting existing species, The New York Times reported. But Novak argued that the genetic technology required for both de-extinction and conservation is the same.

The FWS also noted that it is not abandoning more traditional conservation efforts.