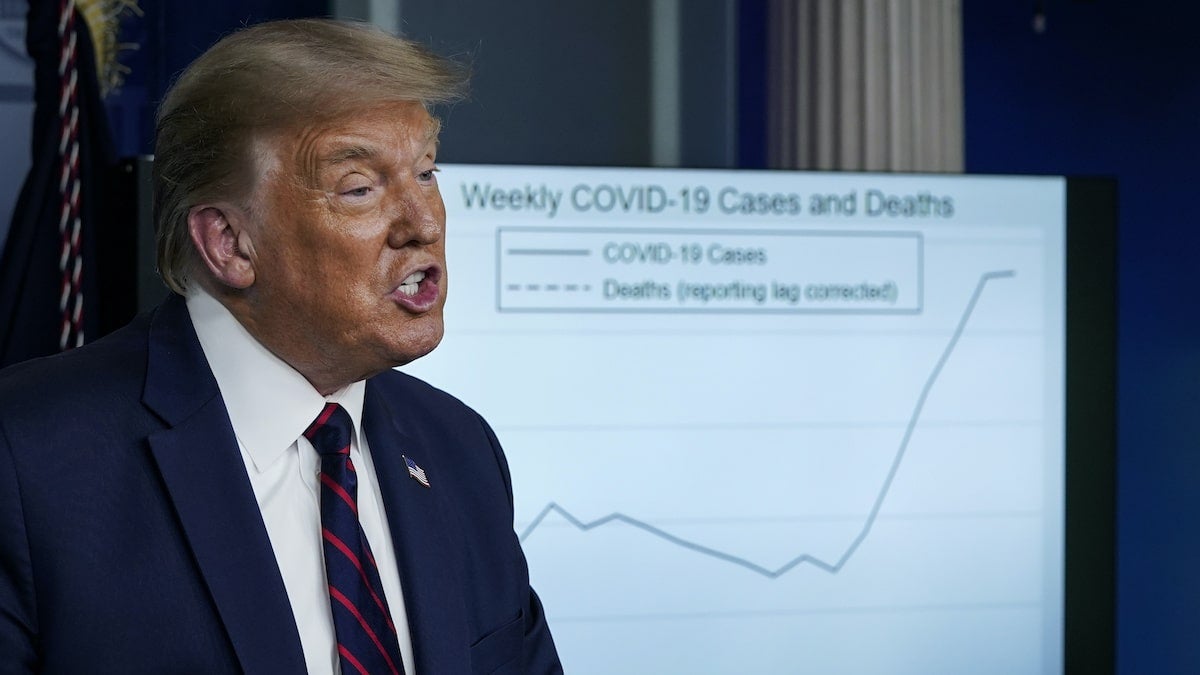 Trump speaks during a news conference in the James Brady Press Briefing Room of the White House on Aug. 4, 2020 in Washington, DC. Drew Angerer / Getty Images

The U.S. has decided to stick to its isolationist strategy for developing, producing and distributing a vaccine for the novel coronavirus. On Tuesday, the Trump administration announced that it will not take part in the international efforts led by the World Health Organization (WHO) to distribute a vaccine equally around the world, according to The Washington Post.

That means that if a vaccine is first developed in the U.S., it will stay here and likely go to the highest bidders rather than the corners of the world that most need it, but are unable to pay for it.

Last month, the WHO announced that 172 countries around the world were joining together to form the COVID-19 Vaccines Global Access Facility, or COVAX, which will work to develop, test and distribute the vaccine equally, according to The Guardian. COVAX is a joint effort put together by the WHO, along with the Coalition for Epidemic Preparedness Innovations and Gavi, the Vaccine Alliance.

Asked on Monday if the U.S. would join COVAX, White House spokesperson Judd Deere issued a statement that read: “The United States will continue to engage our international partners to ensure we defeat this virus, but we will not be constrained by multilateral organizations influenced by the corrupt World Health Organization and China.”

COVAX plans to purchase and distribute roughly 2 billion doses of a coronavirus vaccine by the end of 2021. On Tuesday, the European Commission announced that it will contribute 8 million to the effort, which includes many U.S. trading partners and allies, like Germany and Japan.

The refusal by the U.S. to participate in a global effort to fight the coronavirus is worrying to public health officials and to academics who see international cooperation as a necessity to stopping the virus in an interconnected world. It also is an ominous harbinger when facing other international threats, such as the climate crisis.

Kendall Hoyt, an assistant professor at Dartmouth’s Geisel School of Medicine, told The Washington Post that the move was akin to opting out of an insurance policy.

Experts say that the idea beyond COVAX is to discourage hoarding of the vaccine and to focus first on high-risk populations around the world, which, in the long run, will benefit the global community, according to The Washington Post.

“No one is safe until everyone is safe. No one country has access to research and development, manufacturing and all the supply chain for all essential medicines and materials,” said WHO Director General Dr. Tedros Adhanom Ghebreyesus in August, as The Guardian reported. “We need to prevent vaccine nationalism.”

Some in the Trump administration see the benefit in international cooperation. According to The Washington Post, Health and Human Services Secretary Alex Azar and Deputy Secretary of State Stephen Biegun both wanted to explore a role for the U.S. in COVAX, but were shut down by administration officials who believe the U.S. has enough vaccine candidates that it can take a nationalist strategy.

However, that’s a bet that can have dire consequences for the U.S. either way. If a U.S. vaccine candidate does not work, the country will have no vaccine while the rest of the world does. Alternatively, if a U.S. vaccine does work, then the country will have a vaccine and distribute it to low-risk people, leaving its trading partners and potential tourists in the lurch.

“The behavior of countries when it comes to vaccines in this pandemic will have political repercussions beyond public health,” said Suerie Moon, co-director of the Global Health Center at the Graduate Institute of International and Development Studies in Geneva, to The Washington Post. “It’s about, are you a reliable partner or, at the end of the day, are you going to keep all your toys for yourself?”