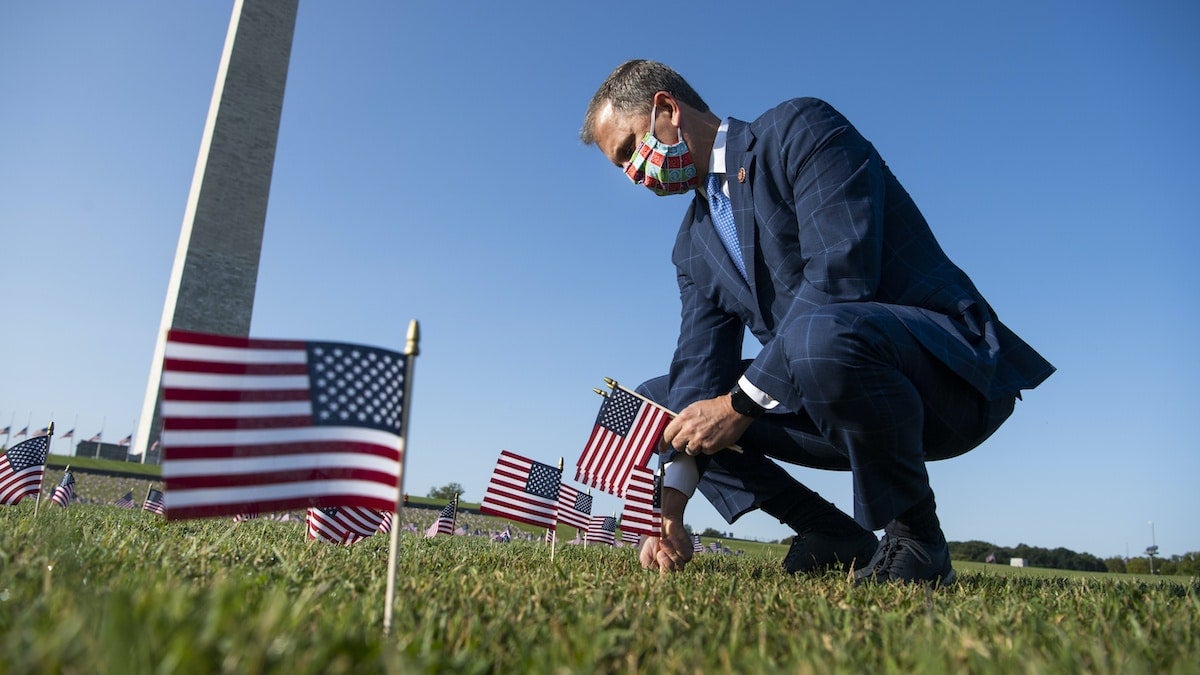 Rep. Sean Casten, D-Ill., places a flag at the COVID Memorial Project's interfaith memorial service to honor the 200,000 people who died due to coronavirus on the National Mall on Sept. 22, 2020. Tom Williams / CQ-Roll Call, Inc. via Getty Images

The United States passed 200,000 deaths due to COVID-19 Tuesday and experts warn that number may double before the end of the year as an autumn surge in cases starts, according to USA Today.

Researchers at the Institute for Health Metrics and Evaluation at the University of Washington (IHME) analyzed various scenarios that include fatigue from wearing masks and social distancing to create projections for the number of COVID-19 deaths we should expect by Jan. 1. One of their models has the U.S. reaching just shy of 400,000 deaths by the beginning of 2021.

“The worst is yet to come. I don’t think perhaps that’s a surprise, although I think there’s a natural tendency as we’re a little bit in the Northern hemisphere summer, to think maybe the epidemic is going away,” said Dr. Christopher Murray, director of the IHME, earlier this month, as CNBC reported.

The U.S. accounts for roughly one-fifth of all the confirmed COVID-related deaths around the world despite having only 4 percent of the population, according to CNBC. The virus claimed the lives of roughly 100,000 Americans in the first four months of the outbreak. That number doubled over the next four months. Now, several states are seeing surges in cases after summer peaks in the Southeast, Texas and Arizona have diminished.

The surges that took place across those states quickly declined with mitigation efforts like social distancing and mandated mask wearing, according to The New York Times.

According to The Washington Post, 27 states and Puerto Rico have seen an increase in the number of cases over the last week. It also found that six states and Puerto Rico set record highs for the number of positive cases for a single day on Monday. While roughly half the states are seeing an increase in cases, only seven are seeing decreases, according to data from Johns Hopkins University, as CNN reported.

“We’re entering into the fall and into the winter, and that means there’s going to be more indoor things than outdoor things,” Dr. Anthony Fauci said Tuesday during the Atlantic Festival, as CNN reported. “Going into that situation, I would like to have seen the baseline of where we are — the daily number of infections — come way, way down, and not be stuck at around 30 to 40,000 per day.”

In addition to the death toll, experts note that we are just starting to learn about the long-term effects of people who have survived the virus, but are experiencing physical or cognitive side effects that hamper their daily life. Also, the true death toll may be much higher since there have been more than 200,000 excess deaths this year since February, according to CDC statistics, as CNBC reported. Excess deaths are the actual number of deaths compared to a projection based on historical averages.

“Pandemics are inevitable. They’re going to happen. But does it have to get this bad? No,” said Dr. Syra Madad, senior director of the systemwide special pathogens program at New York City Health + Hospitals, as CNBC reported. “That was avoidable, and we’ve made significant mistakes as a nation. We have been behind the eight ball from the very beginning.”

The U.S. is not alone in seeing a surge in cases as the weather starts to change and restrictions ease up slightly. France, Spain and Israel are all struggling as new cases start to spread, according to The Washington Post. They were among the 73 countries that are seeing upticks in cases, as The New York Times reported.

In the United Kingdom, Prime Minister Boris Johnson announced strict new measures that may last for the next six months as the country saw 5,000 new cases Tuesday. Pubs and restaurants will close by 10 p.m. and fines for not wearing a mask will double to 5, according to The New York Times. The new mitigation efforts came as government scientists and medical advisers warned that the UK could see 50,000 new cases a day in short order if the virus is allowed to spread unchecked.

“We always knew that while we might have driven the virus into retreat, the prospect of a second wave was real,” Johnson said to the House of Commons Tuesday, as The New York Times reported. “I’m sorry to say that, as in Spain and France and many other countries, we’ve reached a perilous turning point.”