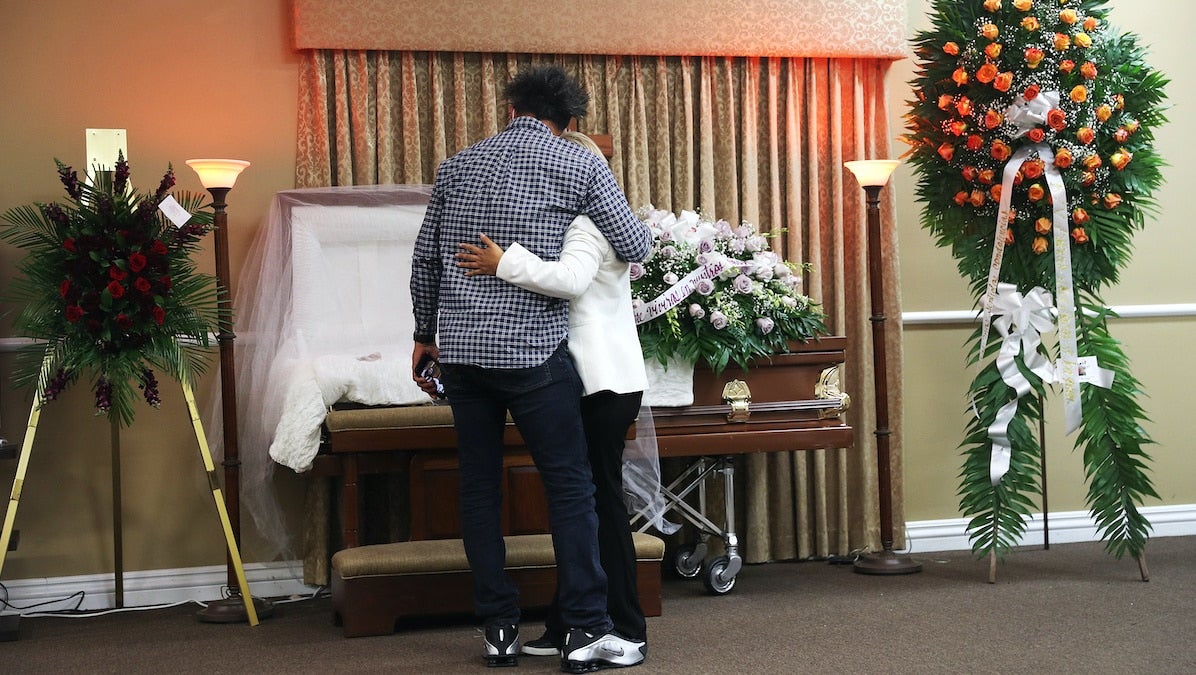 Glena Amaya and Carlos Marcano mourn for her husband German Amaya, who died from COVID-19, at the Maspons Funeral Home on Aug. 8, 2020 in Miami, Florida. Amaya had worked for 11 years at the Fontainebleau Miami Beach luxury hotel before the hotel furloughed him in March. The family said his healthcare coverage was cut and they were left without aid for wake ceremony expenses or medical bills. Joe Raedle / Getty Images

The U.S. death toll from the new coronavirus passed 170,000 on Sunday, according to tallies from both Reuters and Johns Hopkins University, as The Guardian reported.

The grim milestone comes days after the Centers for Disease Control and Prevention (CDC) predicted the country could see 200,000 COVID-19 deaths by Labor Day, as The Guardian reported further. And this is before the start of flu season.

CDC Director Dr. Robert Redfield warned Wednesday that the two diseases together could bring the U.S. its “worst fall” ever from a public health perspective if Americans don’t adapt preventative measures.

“I’m asking you to do four simple things: wear a mask, social distance, wash your hands, and be smart about crowds. If you do those four things it will bring this outbreak down,” Redfield said in an interview with WebMD, as CBS News reported. “But, if we don’t do that… this could be the worst fall from a public health perspective we’ve ever had.”

Redfield also urged Americans to get their flu vaccines:

“So, by getting that flu vaccine, you may be able to negate the necessity to have to take up a hospital bed, and then that hospital bed can be more available for those that get hospitalized with COVID,” he said.

Florida, Louisiana and Texas led the increase in deaths Sunday, Reuters reported. However, cases are finally falling in most states besides Hawaii, South Dakota and Illinois following a summer surge.

The coronavirus is likely to be one of the leading causes of death in the U.S. this year, Redfield said, as CBS News reported. And the number of extra deaths this year far surpasses even the official coronavirus death toll, The Guardian pointed out.

“Covid-19 deaths could be being undercounted or the pandemic could also be causing increases in other types of death. It’s probably some of both,” Virginia Tech statistics professor Ronald Fricker told The Guardian. “Regardless of the reason, the Covid-19 pandemic has resulted in substantially more deaths than would have otherwise occurred, and it is not over yet.”

Despite the toll, there has been a distinct lack of collective mourning in the U.S. when compared to the response to other national tragedies such as the September 11 terrorist attacks, CNN pointed out.

Flags on federal buildings were not lowered to half mast over virus deaths until late May.

University of California, Berkeley professor Judith Butler told CNN this was partly because the infectious nature of the virus has made public gatherings like funerals or memorials unsafe.

“Gathering gives people a way to acknowledge the loss, to test the reality of the loss with others, to bring back the memory of the person in the context of the living, and to affirm the possibility of living on,” Butler told CNN. “But to deal with loss in utter isolation, or to have loss sanitized through curves and graphs, leaves us without the means we need to affirm life in the wake of loss.”