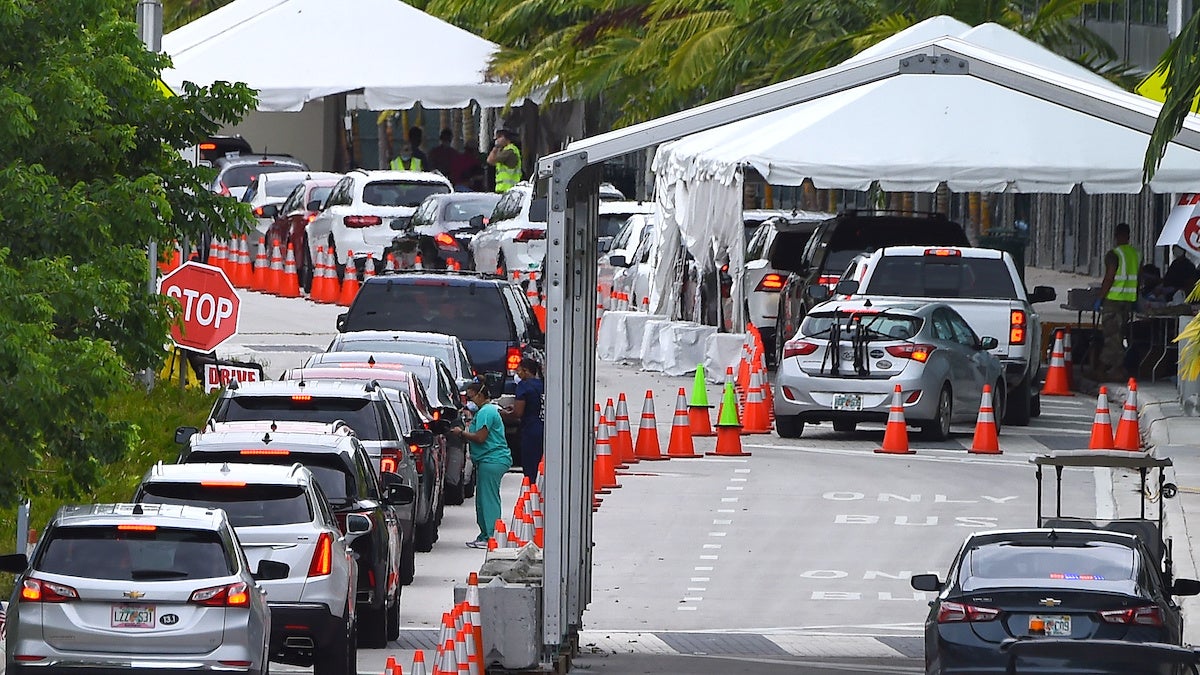 People wait for a COVID-19 test at a walk-in and drive-through coronavirus testing site in Miami Beach, Florida on July 22, 2020. CHANDAN KHANNA / AFP via Getty Images

The number of hospitalizations is also on the rise. Around 59,600 people were hospitalized with the virus on Wednesday, according to COVID Tracking Project data reported by CNN. That’s only around 300 fewer than during the previous peak in mid-April.

“We’ve rolled back essentially two months’ worth of progress with what we’re seeing in number of cases … in the United States,” Dr. Ali Khan, dean of the University of Nebraska Medical Center’s College of Public Health, told CNN on Thursday.

It took more than three months for the U.S. to move from its first reported case to one million cases April 28, The New York Times reported. It took another 43 days for the country to hit two million cases June 10, 27 days to hit three million July 7 and just 16 days to reach four million Thursday. (Johns Hopkins figures put the time between three and four million cases at 15 days, according to CNN). Cases are now rising by an average of more than 2,600 per hour, according to Reuters, the highest rate in the world.

The US coronavirus epidemic went from:

Deaths are also increasing. The country reported more than 1,100 deaths for the third day in a row Thursday. However, that number falls below the 2,000 or so deaths a day reported in April. Still, the U.S. has now confirmed 144,305 deaths from the virus, according to Johns Hopkins University data as of Friday morning. That’s nearly double the next-highest death toll in Brazil.

“Nationwide, a total of 82,141 COVID-19 deaths (range of 39,174 to 141,995) are currently projected through the epidemic’s first wave. US COVID-19 deaths are estimated to rise through April 15, the country’s projected peak of deaths per day,” a model from the University of Washington’s Institute for Health Metrics and Evaluation predicted in late March, as NPR reported.

The U.S. has now passed the upper end of that projected death toll and the first wave is not yet over.

Cases are currently rising in 39 states, as well as Washington, DC, Puerto Rico and the U.S. Virgin Islands, according to The New York Times. Especially hard-hit states include California, Florida and Texas, which have all reported high case counts, according to NPR. Arizona and Louisiana have also reported high numbers of cases relative to their populations.

Florida broke its record for the most new deaths in a single day Thursday with 173 reported. Its hospitals are also feeling the strain. Intensive care units (ICUs) have reached capacity in more than 50 of them, and only 15 percent of the state’s ICU beds remain available, CNN reported.

“Any spike in cases or increase in hospitalizations is going to put our ER system and hospital systems in peril,” Tampa, Florida emergency room physician Dr. Damian Caraballo told CNN.

President Donald Trump on Thursday reversed course and said he would cancel the portion of the Republican National Convention scheduled to take place in Jacksonville, Florida in August, The New York Times reported. He had pushed party officials to move it there because the original site North Carolina would not promise large crowds.

“The timing for this event is not right,” Trump said, as Reuters reported. “It’s just not right with what’s happened recently, the flare-up in Florida. To have a big convention it’s not the right time.”

The decision comes as Trump has begun to downplay the pandemic less in recent days, encouraging measures like face masks, The New York Times pointed out.

At least 41 states now require face coverings, and some experts think a combination of masks and social distancing can get the outbreak back under control, according to CNN.

This is essentially the strategy proposed by U.S. Assistant Secretary for Health Brett Giroir.

“We have to do our mitigation steps: Wear a mask, avoid the crowds. We won’t see hospitalizations and deaths go down for a couple of weeks because (they are) lagging indicators, but we are turning that tide,” he told the Fox News Network in an interview reported by Reuters.

But some public health experts want the country to go further. More than 150 medical experts, teachers, nurses and others have signed a letter sent to the Trump administration, prominent Congresspeople and state governors Thursday calling for another lockdown to restart efforts to control the virus, as CNN reported.

With uncontrolled spread of #COVID19 in many parts of the U.S., it's time to shut it down, start over, and do it right. If you're a health professional, add your name to our letter calling on America's decision makers to take bold action now to save lives https://t.co/sIo0G2hhDL

“In March, people went home and stayed there for weeks, to keep themselves and their neighbors safe. You didn’t use the time to set us up to defeat the virus. And then you started to reopen anyway, and too quickly,” the letter said. “Right now we are on a path to lose more than 200,000 American lives by November 1st. Yet, in many states people can drink in bars, get a haircut, eat inside a restaurant, get a tattoo, get a massage, and do myriad other normal, pleasant, but non-essential activities.”