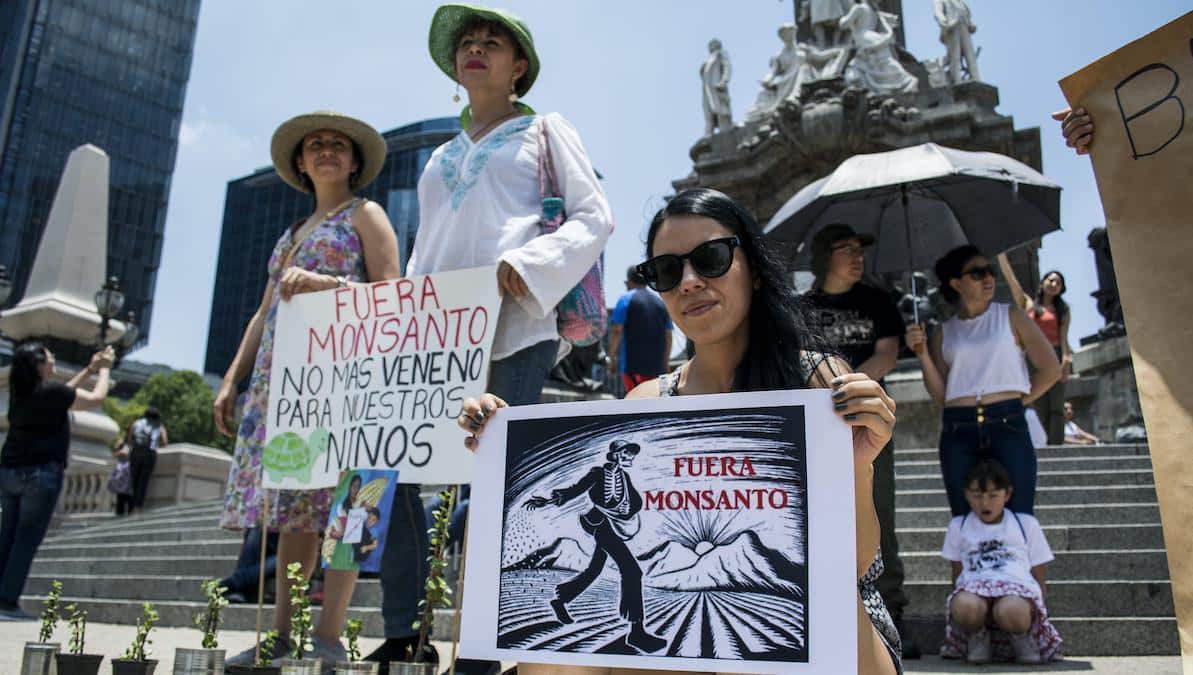 Protesters in Mexico City on May 19, 2018 call for Monsanto to get out of Mexican agriculture. Jesus Alvarado / dpa via Getty Images

While Mexican President Andrés Manuel López Obrador has given farmers in the country a 2024 deadline to stop using glyphosate, The Guardian reported Tuesday that agrochemical company Bayer, industry lobbyist CropLife America, and U.S. officials have been pressuring Mexico’s government to drop its proposed ban on the carcinogenic pesticide.

The corporate and U.S.-backed attempt to coerce Mexico into maintaining its glyphosate imports past 2024 has unfolded, as journalist Carey Gillam detailed in the newspaper, “over the last 18 months, a period in which Bayer was negotiating an billion settlement of legal claims brought by people in the U.S. who say they developed non-Hodgkin lymphoma due to exposure” to glyphosate-based products, such as Roundup.

Roundup, one of the world’s mostly widely-used herbicides, was created by Monsanto which was acquired by Bayer in 2018.

According to The Guardian, which obtained internal documents via a Freedom of Information Act request by the Center for Biological Diversity (CBD), “The pressure on Mexico is similar to actions Bayer and chemical industry lobbyists took to kill a glyphosate ban planned by Thailand in 2019. Thailand officials had also cited concerns for public health in seeking to ban the weed killer, but reversed course after U.S. threats about trade disruption.”

In addition to instructing Mexico’s farmers to stop using glyphosate by 2024, the López Obrador administration on Dec. 31, 2020 issued a “final decree” calling for “a phase-out of the planting and consumption of genetically engineered corn, which farmers often spray with glyphosate, a practice that often leaves residues of the pesticide in finished food products,” the news outlet noted.

The Mexican government has characterized the restrictions as an effort to improve the nation’s “food security and sovereignty” and to protect its wealth of biological as well as cultural diversity and farming communities.

Mexico’s promotion of human and environmental health, however, “has triggered fear in the United States for the health of agricultural exports, especially Bayer’s glyphosate products,” Gillam wrote.

But Mexico’s concern for the health of its citizens has triggered fear in the United States for the health of agricultural exports, especially Bayer’s glyphosate products. @Bayer @EPA @SEJ @USDA @USTradeRep https://t.co/pR7UcU7uuR

Based on its analysis of government emails from the Office of the U.S. Trade Representative (USTR) and other U.S. agencies from 2019 and 2020, The Guardian explained how the U.S., frustrated by the positions that Mexico has taken, is trying to use the United States-Mexico-Canada Agreement (USMCA) — the Trump-led free trade deal that Sen. Bernie Sanders (I-Vt.) dubbed NAFTA 2.0 — to force Mexico to abandon its plans to ban glyphosate and phase out GMO corn.

According to The Guardian, Mexico each year imports roughly billion in corn from the U.S., where 90% of corn production relies on GMO seeds.

As the newspaper reported:

One email makes a reference to staff within López Obrador’s administration as “vocal anti-biotechnology activists,” and another email states that Mexico’s health agency (COFEPRIS) is “becoming a big time problem.”
Internal USTR communications lay out how the agrochemical industry is “pushing” for the US to “fold this issue” into the United States-Mexico-Canada Agreement (USMCA) trade deal that went into effect 1 July. The records then show the USTR does exactly that, telling Mexico its actions on glyphosate and genetically engineered crops raise concerns “regarding compliance” with USMCA.
Citing discussions with CropLife, the U.S. Environmental Protection Agency (EPA) joined in the effort, discussing in an inter-agency email “how we could use USMCA to work through these issues.”

Nathan Donley, a biologist at CBD, told The Guardian that “we’re seeing more and more how the pesticide industry uses the U.S. government to aggressively push its agenda on the international stage and quash any attempt by people in other countries to take control of their food supply.”

Corporate executives in the agrochemical industry reportedly became alarmed about the López Obrador administration’s position on pesticides in late 2019 when Mexican officials explained their decision to refuse imports of glyphosate from China by referring to the “precautionary principle.”

Detailing a series of emails between U.S. government officials and industry executives, Gillam described how the latter told the former “that they feared restricting glyphosate would lead to limits on other pesticides and could set a precedent for other countries to do the same.”

The emails also indicated worries that “Mexico may also reduce the levels of pesticide residues allowed in food,” a development that industry executives warned would undermine U.S. exports of corn and soybeans to Mexico.

According to The Guardian, “It is unclear if the efforts to push Mexico to change its policy position are still underway within the new Biden administration.”

The Institute for Agriculture and Trade Policy (IATP), a progressive think tank working to build fair and sustainable food, farm, and trade systems, tweeted Tuesday that the USTR has a choice.

“Will they continue the pattern of doing the bidding of global biotech/seed firms like Monsanto?” asked IATP. “Or, will the USTR respect other countries’ rights to protect the environment and indigenous crops? Will they recalibrate U.S. trade policy to be more transparent?”

IATP, for its part, has recommended that Katherine Tai, President Joe Biden’s pick to lead the USTR office, “break with the corporate free trade model” supported by previous administrations from both major parties.