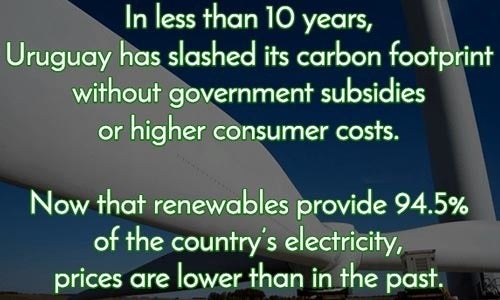 Uruguay has made some impressive strides in the last decade on the environmental front. The South American country of 3.4 million has drastically reduced its carbon footprint in less than 10 years “without government subsidies or higher consumer costs,” the country’s National Director of Energy Ramón Méndez told The Guardian.

Through energy efficiency measures and a vast expansion in renewables, the country has truly set itself apart. According to Méndez, renewables provide 94.5 percent of the nation’s electricity, and wind, solar, biomass and hydropower now comprise 55 percent of the country’s overall energy mix (including transport fuel).

The transportation sector remains a challenge for the country in switching completely to renewables. To address this, the capital city Montevideo is looking into buying autonomous electric cars for its fleet of municipal vehicles.

“What we’ve learned is that renewables is just a financial business,” Méndez says. “The construction and maintenance costs are low, so as long as you give investors a secure environment, it is a very attractive.”

Though the country only generates 0.06 percent of global emissions, Uruguay hopes to be carbon neutral by 2030. Méndez is in Paris at COP21 offering one of the world’s most ambitious climate pledges: “88 percent cut in carbon emissions by 2017 compared with the average for 2009-13,” according to The Guardian.

The country has no nuclear power and has not built a new hydropower project in more than two decades. That sets it apart from other small countries with high proportions of renewable energy (think: Paraguay, Bhutan and Lesotho), which are largely dependent on hydropower. Gary Wockner of Save the Colorado argues that hydropower is actually “one of the biggest environmental problems our planet faces” and a “false solution” for addressing climate change.

While not every country has Uruguay’s small population and favorable natural resources, Uruguay has proven “renewables can reduce generation costs, can meet well over 90 percent of electricity demand without the back-up of coal or nuclear power plants, and the public and private sectors can work together effectively in this field,” said Méndez. Other Paris delegates should take note.