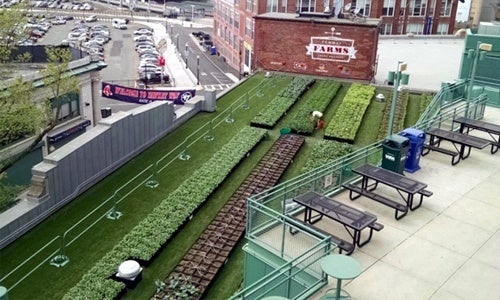 As fans sitting on the third baseline streamed into Boston’s Fenway Park for the Red Sox home opener, they were greeted with the sight of 1,800 square feet of raised beds on a formerly unused 5,000-square-foot rooftop. “Fenway Farms” initially will grow fresh vegetables not typically found in baseball stadiums—arugula, Swiss chard and broccoli rabe, for instance—for use by the chefs at the EMC Club kitchen, just 25 feet away. 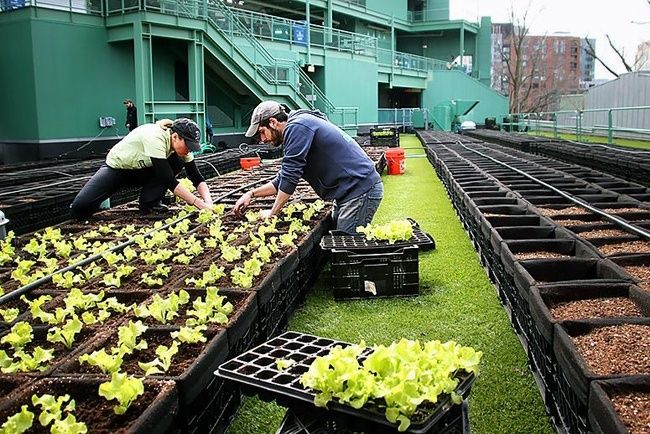 The ballpark may not conjure images of health and sustainability—and certainly not innovation in urban agriculture—but a handful of Major League clubs just may change that, and in the process give new meaning to “farm teams.” This season, the Red Sox join the Colorado Rockies, the San Diego Padres and the San Francisco Giants in starting to grow a portion of their stadium concessions in on-site farms and gardens.

The farm’s location is highly visible to many of the roughly 37,000 fans who fill the ballpark for the team’s 81 home games and the handful of concerts and other events to which Fenway plays host—a potential influence that is not lost on Chris Knight, the team’s manager of facility planning and services.

“We have such a platform here at this level of sports and at Fenway Park—this is one way we can make an impact for the environment and nutrition,” he said.

When the first vegetables and herbs were harvested in early May, Fenway Farms contributed its part to a long-term push at the ballpark to operate more sustainably—and a more recent emphasis on integrating healthy food into concessions. Knight said the idea for the farm came from Linda Pizzuti Henry, wife of Sox co-owner John Henry. Last summer, the founders of Green City Growers—a company converting unused space into farms and gardens—met with Henry to pitch ideas for turning that dream into a reality.

The process “picked up quickly” from there, said Green City Growers founder, Jessie Banhazl, with the team picking out a site on the front-office roof and growers meeting with chefs at the seasonally inspired EMC Club to come up with a lineup of veggies to grow. Recover Green Roofs began construction and farm installation in mid-March, and plants went into the newly poured soil last week—just in time for the first home game of the season. 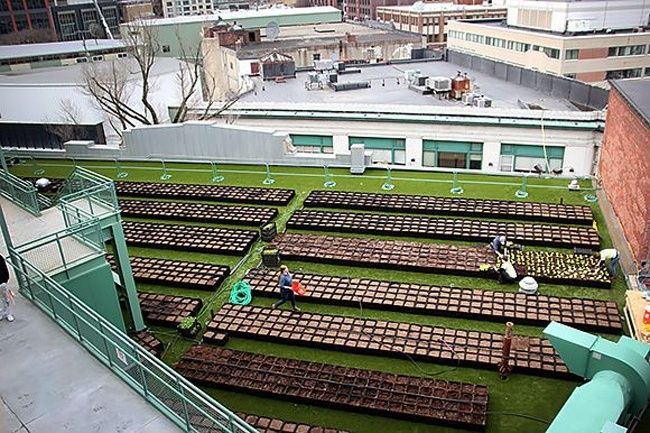 “It’s wild. We’re really, really, really excited about this,” said Banhazl, whose company will maintain the farm. “This particular project is the coolest and most widespread reach that we’ve ever seen with an urban agriculture project.”