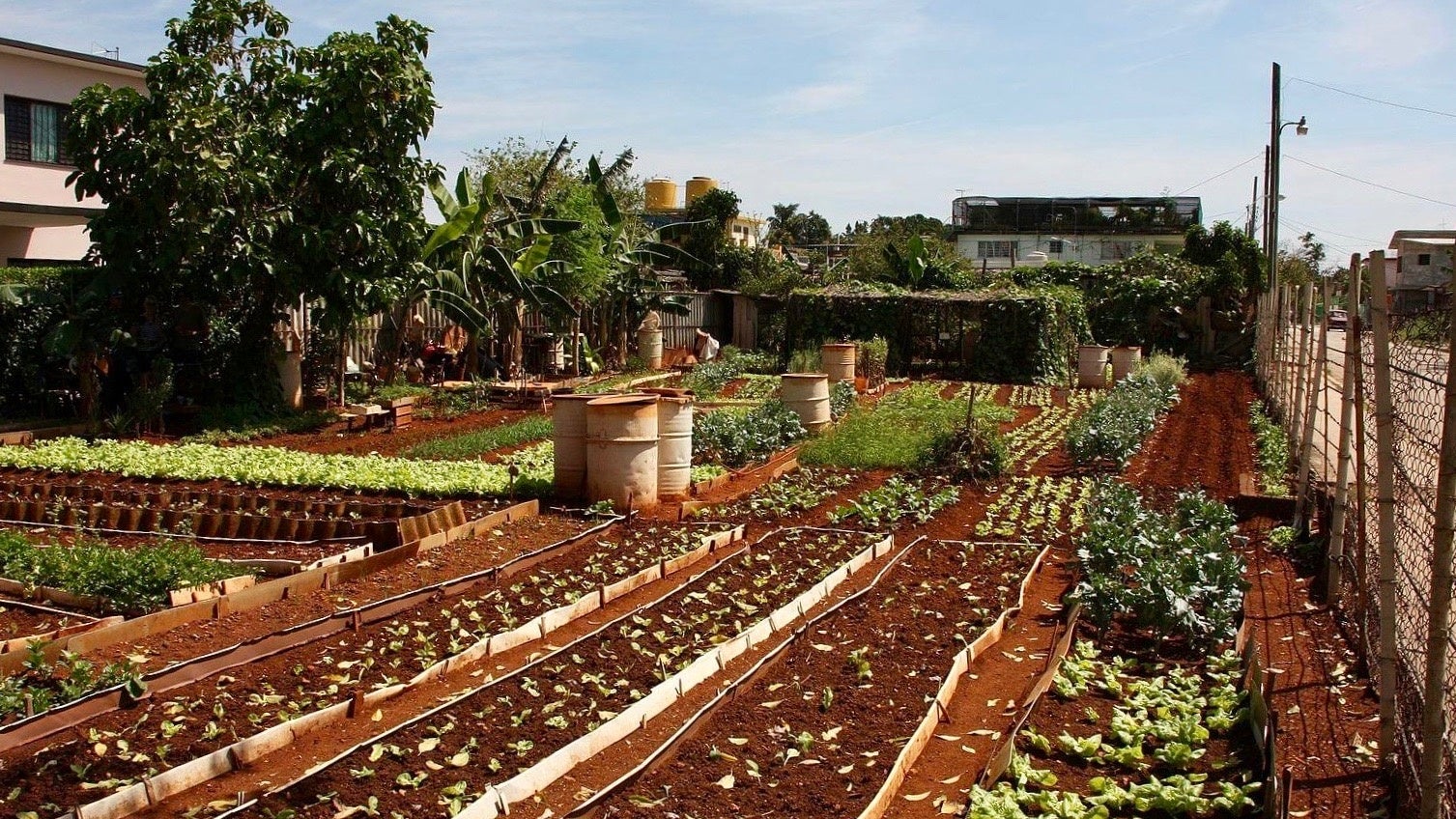 When countries run short of food, they need to find solutions fast, and one answer can be urban farming.

That was the remedy Cuba seized with both hands 30 years ago when it was confronted with the dilemma of an end to its vital food imports. And what worked then for Cuba could have lessons today for the wider world, as it faces growing hunger in the face of the climate crisis.

When the Soviet Union collapsed in the 1990s, most of Cuba’s food supplies went with it. To stave off severe malnutrition the people of the capital, Havana, found an imaginative answer: urban gardening. That’s now seen as a possible blueprint for the survival of city populations in a warming world.

The Rapid Transition Alliance has published a longer account of Cuba’s very fast move towards self-sufficiency as part of its series Stories of Change, which describes cases of large-scale, rapid transformation that can seem difficult to achieve but which have often worked before.

The problem of hunger for the Cubans arose because during the Cold War they had stopped producing food of their own and turned over most of their farmland to sugarcane plantations to supply the Soviet Union. In return for these mountains of sugar Moscow provided Cuba with food, chemical fertilizers and fuel oil for its cars and tractors.

The Soviet collapse brought the breakdown of this trade, and food rationing for city dwellers. And Cuba lost its main food supply while it was still coping with strict U.S. sanctions. Reverting to conventional farming would have taken time and was in any case difficult because the Soviet fertilizers, fuel and pesticides had also dried up.

So the highly-educated urban citizens, faced with rationing which reduced the average Cuban’s daily calorie intake from 2,600 in 1986 to 1,000-1,500 in 1993, organized themselves to grow their own food in improvised urban allotments.

At first, struggling with little know-how and without fertilizers, their yields were low, but by producing compost and other organic growing mediums, plus introducing drip-fed irrigation, they began to see improvements.

Short of chemicals, the gardeners resorted to biological controls like marigolds (where opinions today are mixed) to deter harmful insects.

By 1995 Havana alone had 25,000 allotments tended by families and urban cooperatives. The government, realizing the potential benefits, encouraged the movement.

Soil quality was improved with a mixture of crop residues, household wastes and animal manure to create more compost and soil conditioners. The extra fresh vegetables and fruit this provided quickly improved urban dwellers’ calorie intake and saved many from malnutrition.

In the Cuban climate, with irrigation changes and soils undergoing constant improvement from added organic matter, the allotments could produce vegetables all year round. Lettuce, chard, radish, beans, cucumber, tomatoes, spinach and peppers were grown and traded.

There is evidence as well that the extra exercise which these urban gardeners got from tending their allotments, plus the time they spent outdoors in the open air, benefited their health.

Eventually, realizing that self-sufficiency was the only way to feed the population, the government banned sugarcane growing altogether. Lacking fertilizer, many former plantations were turned over to organic agriculture. The shortage of oil for tractors meant oxen were used for ploughing.

Cuba’s experience of urban agriculture inspired many environmentalists to believe that this is at least part of the solution to the food shortages threatened by climate change. By 2008 food gardens, despite their small scale, made up 8 percent of the land in Havana, and 3.4 percent of all urban land in Cuba, producing 90 percent of all the fruit and vegetables consumed.

As a result the calorie intake of the average Cuban quickly rose to match that of Europeans, relying on a diet composed mainly of rice, beans, potatoes and other vegetables — a low-fat diet making obesity rare.

Because of the climate, though, wheat does not grow well in Cuba, and the island still has to import large quantities of grain for bread. Meat is in short supply and also has to be mainly imported.

Despite this, Cuba’s experience since the Cold War ended in the 1990s shows that large quantities of fresh food can be grown in cities and that urban agriculture is sustainable over decades.

For other countries vulnerable to sudden loss of food supplies, Cuba’s experience suggests that urban farming can be one way of staving off potential famine when imports are restricted, expensive or simply unobtainable.

The Rapid Transition Alliance is coordinated by the New Weather Institute, the STEPS Centre at the Institute of Development Studies, and the School of Global Studies at the University of Sussex, UK. The Climate News Network is partnering with and supported by the Rapid Transition Alliance, and will be reporting regularly on its work. If you would like to see more stories of evidence-based hope for rapid transition, please sign up here.

Do you know a story of rapid transition? If so, we’d like to hear from you. Please send us a brief outline on info@climatenewsnetwork.net. Thank you.