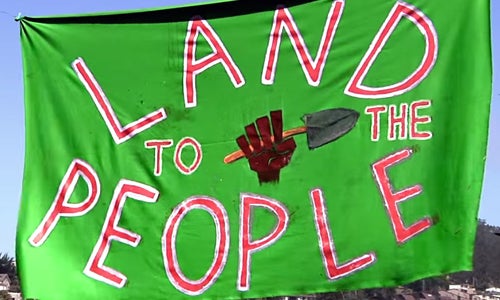 All across America, open land—fields and farms and woods—is being snatched up by developers for shopping malls, subdivisions and big box stores, as we continue some of the worst land use practices imaginable.

But some people aren’t letting this happen without a fight. In the East Bay of California in the spring of 2012, a group of 200 people cut the padlock on the city’s last piece of urban farmland, slated to become a shopping mall and condo complex. There they planted 15,00o vegetable seedings.

Now a documentary about their efforts called Occupy the Farm will open in select theaters across the country today with its premier in—appropriately—Berkeley.

The filmmakers were with the farmers that first day and followed them for five months. “What happens next will change the fate of the land and introduce a new strategy for activism,” says the promotion for the film.

“Our cameras ‘occupied’ the occupation,” said director Todd Darling. “We witnessed the dramatic and rapid evolution of tactics and strategy of both the farmers and their adversaries—officials from the University of California. As a result, Occupy the Farm captures a significant and ongoing conflict: the showdown between overdevelopment and agriculture, as well as the contest of wills between a grassroots, consensus based action and the more rigid power structure of California’s largest landowner. Occupy the Farm reveals a new form of activism for the 21st Century.”

Darling, who has worked for MTV and the Olympics, created the film with a team boasting extensive film and environmental credentials. Producer Steve Brown worked on a documentary about the Burning Man Festival; producer Carl Grether recently finished a documentary about urban farming and food justice, Edible City: Grow the Revolution, and editor/filmmaker Blake Hodges has done video work with Greenpeace, Sierra Club and Rainforest Action Network.

How Megacities Have Taken Over the Planet