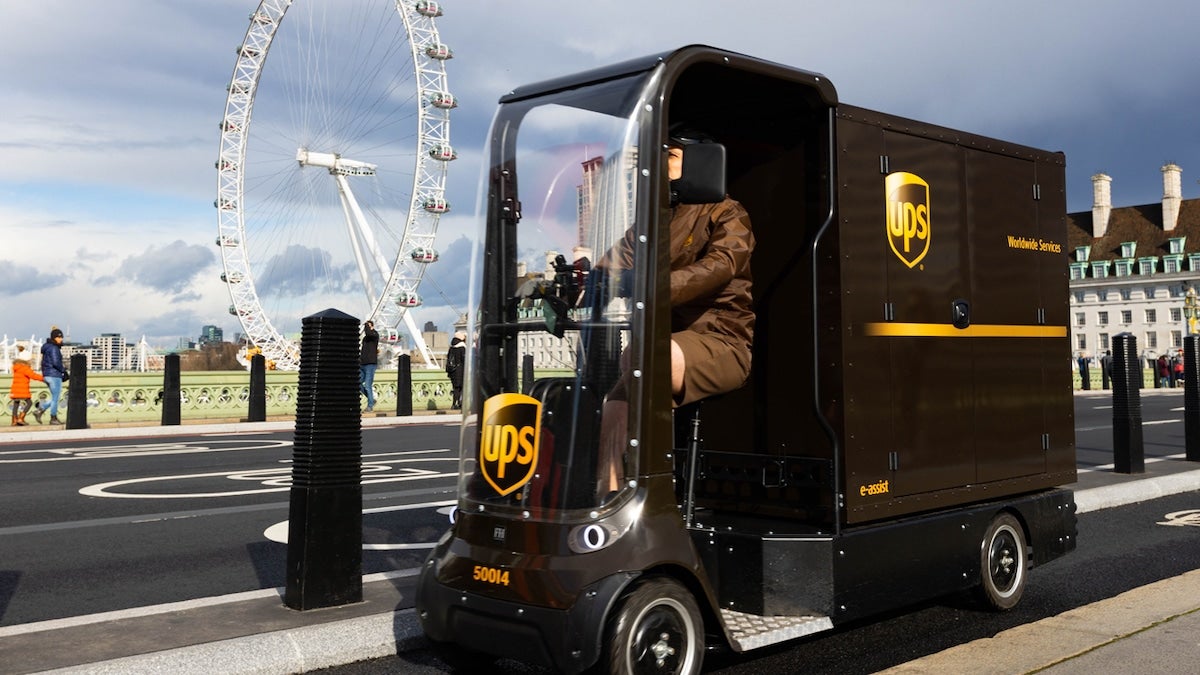 UPS has been testing electric eQuad vehicles in London. UPS

UPS has said it wants to reduce its carbon footprint. On Tuesday, the company announced that it is testing small, battery-powered cycles for drivers to use in busy cities. UPS is currently testing the electric vehicles, dubbed eQuads, on the bustling streets of New York City.

The eQuad is designed to be more efficient and produce less emissions than the standard UPS truck, and it’s part of UPS’s goal to become carbon-neutral by 2050.

“There are more and more opportunities for zero-emission solutions like this that can alleviate inner-city congestion,” Luke Wake, vice president of fleet maintenance and engineering for UPS, told Reuters. “It can also help our operations be more efficient at the same time.”

The eQuad travels at about 15 miles per hour and can haul over 440 pounds of packages. The smaller vehicle takes up far less space than the average UPS truck, making it ideal for city streets. The cycles are also less likely to block traffic in already crowded city streets.

“This is right in my wheelhouse,” said Dyghton Anderson, a UPS delivery person helping with the pilot program, as reported by HuffPost. “I ride to and from work — from all the way from the Bronx all the way to here on 43rd — so it’s pretty comfortable for me.”

But while it won’t become an inconvenience to people in motor vehicles, the eQuads could disrupt bikers and pedestrians. These cycles are small enough to access bike lanes and pedestrian zones that the traditional UPS vehicles cannot.

The eQuad trial in New York is one of several test runs UPS is trying. Other locations include markets across Europe and Asia.

“New York is a complicated city, when we look at the density,” said Nicole Pilet, industrial engineering director for UPS. “So if we can have success here in the city, then we can see how we implement in other cities throughout the U.S.”

The eQuad first debuted at Expo 2020 Dubai as a lower-emissions delivery option that is also quieter and more efficient in dense urban areas. It is also meant to make last-mile deliveries more cost-effective. But UPS is not the only shipping company working on alternative transportation vehicles. FedEx has developed an e-cargo bike that is used in its permanent operations in London, UK and is being tested in other locations as well.

Earlier this month, the U.S. Postal Service also began testing E-cargo bikes in Florida on existing bicycle delivery routes. The USPS bikes hold up to 400 pounds of packages and are designed for use in both urban areas and rural neighborhoods.

The Future of Leather: How Pineapple Leaves, Cacti, and Mycelium Are Revolutionizing the Industry
Leather is everywhere – in our shoes, our purses and
By Linnea Harris
Scientists Can Now Track Agricultural Sulfur Runoff for More Sustainable Wine
As we strive for a more environmentally conscientious world, everything
By Cristen Hemingway Jaynes
New Plastic Alternative Degrades Into Sugar
Scientists around the world are working to find an alternative
By Olivia Rosane