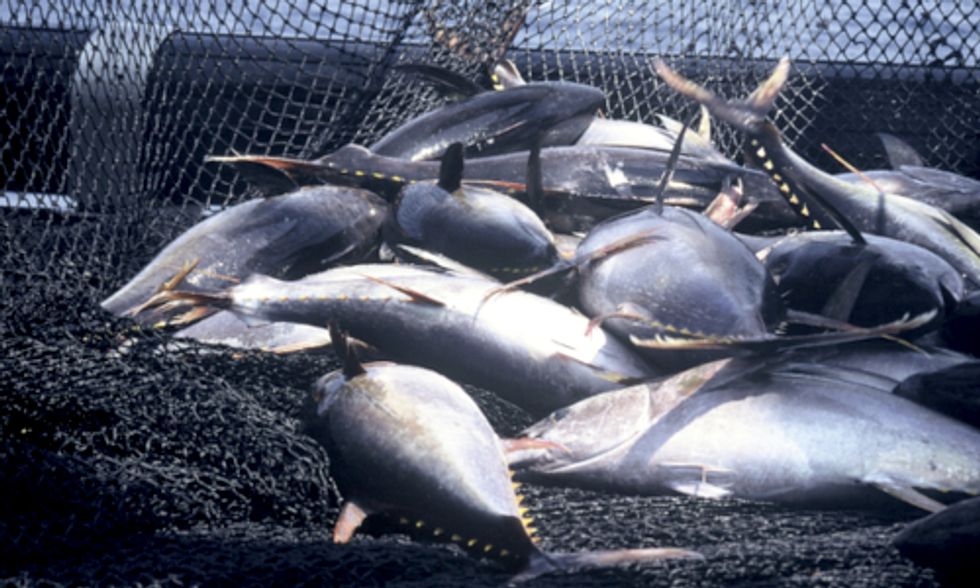 When people talk about illegal trafficking in wildlife, the glistening merchandise laid out on crushed ice in the supermarket seafood counter—from salmon to king crab—probably isn’t the first thing that comes to mind. But 90 percent of U.S. seafood is imported, and according to a new study in the journal Marine Policy, as much as one-third of that is caught illegally or without proper documentation.

The technical term is IUU fishing, for illegal, unreported and unregulated fishing. But such improbable allies as Greenpeace and Republican members of the U.S. Senate now refer to it as “pirate fishing.” And it ensnares seafood companies, supermarkets and consumers alike in a trade that is arguably as problematic as trafficking in elephant tusks, rhino horns and tiger bones.

Up to 40 percent of tuna imported to the U.S. from Thailand is illegal or unreported. © Helene Petit/ World Wildlife Fund

Among the egregious violations, according to the study: up to 40 percent of tuna imported to the U.S. from Thailand is illegal or unreported, followed by up to 45 percent of pollock imports from China, and 70 percent of salmon imports. (Both species are likely to have been caught in Russian waters, but transshipped at sea and processed in China.) Wild-caught shrimp from Mexico, Indonesia and Ecuador are also more likely to be illegal, and some illegal wild-caught shrimp may be disguised as farmed shrimp.

In recent months, government agencies and international maritime regulators have begun taking counter-measures to stop the illegal trade. Late last month, the European Union (EU) banned the importation of fish from Belize, Cambodia and Guinea, alleging that those nations either sold flags of convenience—registrations having nothing to do with the location of the actual owners—or otherwise failed to cooperate in efforts to stop illegal fishing. The EU also issued “yellow card” warnings to Curaçao, Ghana and South Korea.

The U.S., which has lagged behind Europe on the illegal imports issue, also acted early this month, with the U.S. Senate approving four treaties aimed at limiting illegal fish imports. The most important of them was the “port state measures” agreement, under which 11 coastal nations have committed to keep foreign vessels suspected of illegal fishing out of their ports. That treaty still requires approval by 14 other countries, meaning it will be several years before it takes effect.

Finally, the International Maritime Organization (IMO) in December approved a requirement that every fishing vessel of 100 tons or larger have an identifying number, like the vehicle identification number on a car. Freighters already have IMO numbers, which stay with them from the laying of the keel to the scrapyard. Extending that system to fishing vessels will make it harder to disguise an illegal catch by simply swapping a vessel around to different companies or different flags of convenience, says Tony Long, director of the Ending Illegal Fishing Project for the Pew Charitable Trusts. It will also close a loophole that has made it convenient to use fishing vessels in drug deals, gun running and other criminal activities.

Long characterizes the permanent identifying number and the closing of ports to certain vessels as two of the three major steps needed to reduce the illegal trade. But the third step—creating a worldwide vessel monitoring system to track where and when vessels are fishing—will be more challenging.

Vessel monitoring systems (or VMS) already exist in some fisheries, says Long, but “global VMS would be a significant step forward.” Most ships already have Automated Information Systems, which give out critical data to nearby ships like name, course and speed. But fishing vessels sometimes turn them off when working in illegal waters. Transshipping an illegal catch at sea to other vessels is also a common strategy, to disguise it as legal. A global system using satellites would make that sort of cheating harder to disguise.

“Now all the effort goes into chasing the bad guys,” says Long. “You spend 80 or 90 percent of your time trying to get the 10 or 20 percent who are misbehaving. We want a system where people who follow the legal standards, and haven’t transshipped at sea, can do business smoothly. It’s all about transparency.” On the other hand, if a non-complying vessel “comes in with its hold full of fish, and it gets turned away form port after port, it costs them money. It’s all about reversing the burden.”

The ultimate goal, says Long, “is to put in place a system where retailers can say what boat caught what fish and where. It’s impossible today, but it’s not impossible.” His group is now working on “traceability” with supermarket chains, including Metro Group. He also hopes to enlist bankers and insurance companies in ensuring that the vessels they finance or insure are not engaged in pirate fishing.

In the absence of ocean-to-dinner plate accountability, the study in Marine Policy about pervasive illegality in the imported seafood market adds a new layer of confusion for seafood consumers. Numerous studies using DNA barcoding have already demonstrated that seafood being sold in the U.S. commonly does not come from the species on the label—with rockfish often substituted for red snapper, or mako shark for swordfish. Concern about the disappearance of cod and other once-common species has also recently led many consumers to tailor their purchases according to sustainability ratings, like the ones from the Marine Stewardship Council or the Monterey Bay Aquarium. But the Marine Policy study makes it apparent that fish varieties we thought were sustainably caught may in fact be contraband.

All this matters, of course, mainly because of the likely effect on the fisheries themselves. About 85 percent of all commercial fisheries are now being exploited up to or beyond their biological limits, according to Tony J. Pitcher, a fisheries researcher at the University of British Columbia and a co-author of the new study. Not being able to account for illegal fishing, much less stop it, makes it impossible to figure out what a sustainable legal catch should be. Beyond that, illegal fishing vessels tend to flout limitations on the type of gear, the fishing methods, or the locations where they work, often resulting in a major death toll for dolphins, turtles, sharks and other bycatch.

For instance, small skiffs operating gill nets to catch shrimp off Mexico’s Baja Peninsula are, according to the new study, “the leading cause of death for the vaquita, a small porpoise endemic to the Gulf of California that is widely cited as the most endangered mammal in the world with a population of only around 200 individuals.”

The illegal trade can also have dire consequences for law-abiding fishermen. In 2012, for instance, the illegal harvest of king crab from Russia not only outweighed the entire catch from Alaska, but U.S. fishermen complained that it drove down their prices by 25 percent. So far in this century, that single Russian fishery has cost U.S. fishermen an estimated $560 million. Experts have put the global cost of illegal fishing at $10-$23.5 billion a year.

The heavy participation of informants in the new study in Marine Policy suggests that the fishing industry may be ready for increased transparency. “There were a surprising number of people within the industry who were uncomfortable about being involved in illegal trade,” says Pitcher. That’s partly out of concern for the future of fisheries.

“The retailers all have the same problem,” said lead author Pramod Ganapathiraju. “They say, ‘I’m getting 20,000 tons of snapper from Indonesia. I’m not sure what I’ll get five, or 10 or 20 years down the line because there are so many countries fishing there and so little control of illegal fishing. But I don’t have any alternative place to get those fish.’”

Ganapathiraju says consumers can play a major role by asking retailers to display the country of origin for the seafood they sell, and by inquiring about whether the retailer can document the legality of the catch. In the U.S., buying from domestic, or even local, suppliers is also helpful, since U.S. fisheries are managed more sustainably than in most other countries.

“You know the vessel doing the catching, or it’s easily traceable. It’s more like a farmers market.”

Finally, he says, the U.S. government needs to increase its workforce for monitoring seafood imports at major ports. Seafood arriving by shipping container deserves special scrutiny, because dealers often use legal imports to disguise illegal ones in the same container. Importers and retailers will become more careful about the origin of the seafood they sell, says Ganapathiraju, as the likelihood increases that they will be caught and held liable for breaking the law, knowingly or otherwise.

In 2011, for instance, federal agents raided a leading seafood company in Seattle and seized 112 tons of king crab illegally harvested in Russia. Though it did not admit guilt, Harbor Seafood ultimately forfeited $2.75 million for its role in the transaction. In another case, the U.S. actually sent proprietors of a Georgia-based fishing business to jail in 2004 for illegally harvesting South African rock lobster over a 14-year-period. Last year, after a decade of appeals in that case, a U.S. judge for the first time ordered the payment of restitution to a foreign government. The culprits, who have fled the country, now face a $29 million payment to the government of South Africa.

That kind of enforcement could ultimately make the open seas seem far less open, and pirate fishing the modern-day equivalent of a hanging offense.