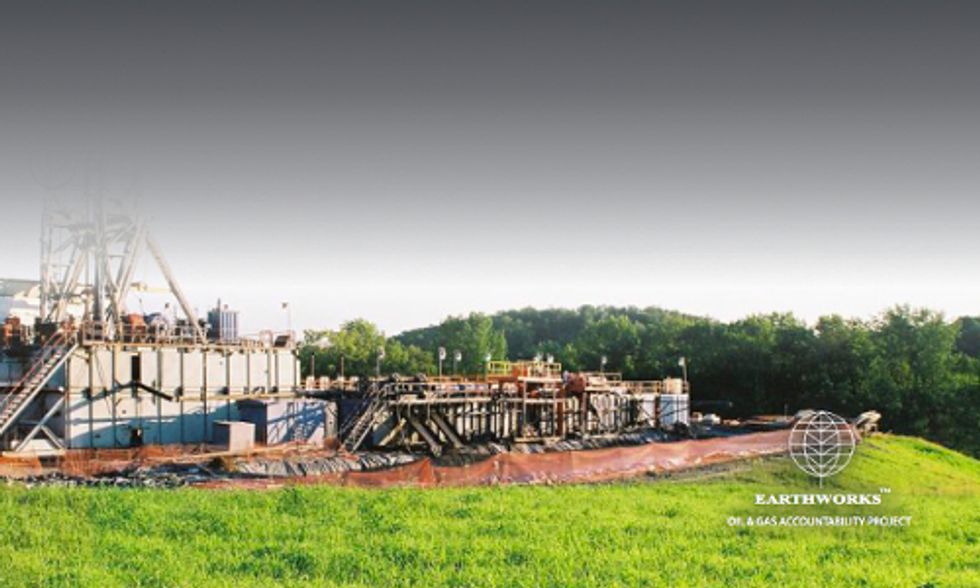 Pennsylvania has been a hot spot for fracking—and many consequences of this from of gas drilling in the state have come to light, from social to health to environmental costs, as well as controversies, including contaminated drinking water in the town of Dimock, gag orders on doctors and victims, and the state health department's enforced silence on the practice.

While that sounds ominous enough, a new report released by Earthworks, after a year in the making, proves that the rush to drill undermines the protection of Pennsylvanians and the enforcement of regulations. Blackout in the Gas Patch: How Pennsylvania Residents are Left in the Dark on Health and Enforcement for the first time definitively connects health and environmental impacts of fracking with a lack of state oversight on a site-by-site basis.

“Legitimate, well-funded oversight should be a prerequisite for deciding whether to permit fracking, not an afterthought," said Nadia Steinzor, the report's lead author. “Governor Corbett and [Pennsylvania Department of Environmental Protection] DEP Secretary Abruzzo often say that the state has an exemplary regulatory program—but refuse to acknowledge that it's not being implemented properly and that air, water and health are being harmed as a result. DEP's limited resources make it impossible to keep up with required paperwork, let alone enforce the law and hold operators accountable."

Blackout in the Gas Patch looks at the permitting, operational and oversight records of 135 wells and facilities in seven counties and details 25 key findings of associated threats to residents' health and the environment. It also includes seven case studies using detailed timelines and maps, including the experiences of the Judy family from Carmichaels in Greene County.

Pam Judy said of her family's experience with fracking: “The Governor and DEP claim that gas and oil operations are safe and that they have everything under control. I live with it every day, and know that's not true—and this report confirms it."

Based primarily on data and documents from the DEP, Blackout in the Gas Patch has found that Pennsylvania prioritizes development over enforcement; neglects oversight; fails to consider known threats; undermines regulations; and prevents the public from getting information.

The report concludes that the oversight of Pennsylvania's oil and gas industry is occurring with three inherent contradictions at play, which are as follows:

1. DEP is charged with protecting the environment and the public, but is under strong political pressure to advance an industry that harms water, air and health.

2. Steep budget cuts to DEP during a shale gas boom means the agency has to do more with less—which in effect has meant insufficient oversight and enforcement.

3. As the number of people impacted by and concerned about the impacts of gas development grows, public access to information on the activities of both operators and DEP remains limited, inconsistent and restricted.

While the report, which offers many recommendations for the state, is a firm indictment of the current situation in Pennsylvania, as Bruce Baizel, director of Earthworks' Oil and Gas Accountability Project, points out: “There's a national crisis in fracking oversight. This report focuses on Pennsylvania, but it easily could have been written about Ohio, or the federal Bureau of Land Management, or Denton, Texas. Blackout illustrates why many residents across the United States have given up on the idea that regulators can manage the oil and gas boom, and are working so hard to stop fracking."

Fracking Ourselves to Death in Pennsylvania