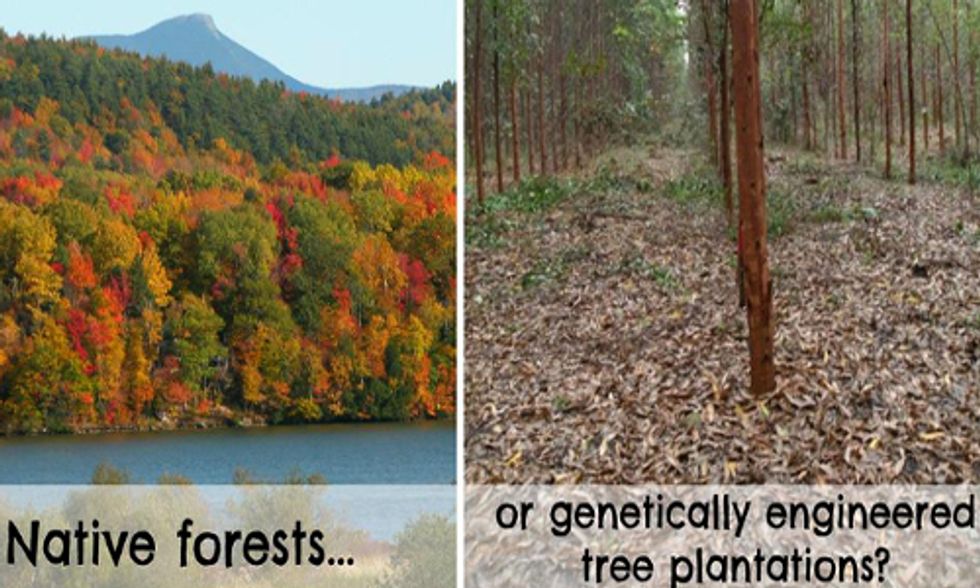 The University of Florida (UF), a leading institution researching genetically engineered (GE) trees, threatened to arrest activists from the Campaign to STOP GE Trees when they arrived on campus Saturday to prepare for a presentation to highlight critical perspectives on tree biotechnology that was scheduled for tonight. The police informed the group that their presentation had been cancelled, and warned them that they were banned from University of Florida property for three years.

"Evicting us from campus was a blatant act of censorship by the University of Florida, likely linked to the millions they are receiving for GE trees research," said Keith Brunner, from the international Campaign to STOP Genetically Engineered Trees.

In 2011, the University of Florida School of Forest Resources and Conservation along with GE tree company ArborGen won a three-year, $6.3 million grant from the U.S. Department of Energy to develop GE loblolly pines for liquid biofuel production. There is rising opposition to GE trees due to concerns over genetic contamination, increased flammability, deforestation and other ecological impacts of industrial tree plantations.

The UF presentation was part of a multi-week speaking tour, The Growing Threat: Genetically Engineered Trees and the Future of Forests. The tour will travel through several southern states (North Carolina, Georgia, Florida, South Carolina) to educate the public about the social and environmental threats posed by the proposed commercial release of billions of genetically engineered freeze tolerant eucalyptus trees in seven southern states from South Carolina to Florida to Texas.

University of Florida Professor Bron Taylor teaches a course on Environmental Ethics and had encouraged students to attend the presentation. He expressed disappointment about the cancellation.

"The University is supposed to be a place characterized by free and robust debate," said Taylor. "This situation begs the question, why was the presentation cancelled and these activists banned from campus under a threat of arrest?"

"As a UF alumnus, I am dismayed that the University would interfere with the free exchange of ideas," said City Commissioner of Lake Worth, FL, Christopher W. McVoy, Ph.D, an expert in ecological restoration of the Everglades. "GE tree plantations have the potential to irreversibly affect large areas of Florida and the South. As Florida's flagship academic institution and as a thought leader regarding southern plantations, the University of Florida has a particular responsibility to foster open discussion of the pros and cons of GE trees."

"The reaction by UF was a pathetic attempt to stifle growing dissent against GE trees by an industry which is flailing amidst major public opposition," stated Anne Petermann, International Coordinator of the Campaign to STOP GE Trees and executive director of Global Justice Ecology Project. "Last April, the USDA received over 37,850 comments—almost 10,000 to one—opposing the commercialization of ArborGen's freeze tolerant GE eucalyptus trees. One month later, the largest ever protest against GE trees was held at the international Tree Biotechnology 2013 conference in Asheville, NC. Opposition is building and the GE trees industry is clearly nervous about it."