Uniting My Voice with Millions to Educate People on Climate Change 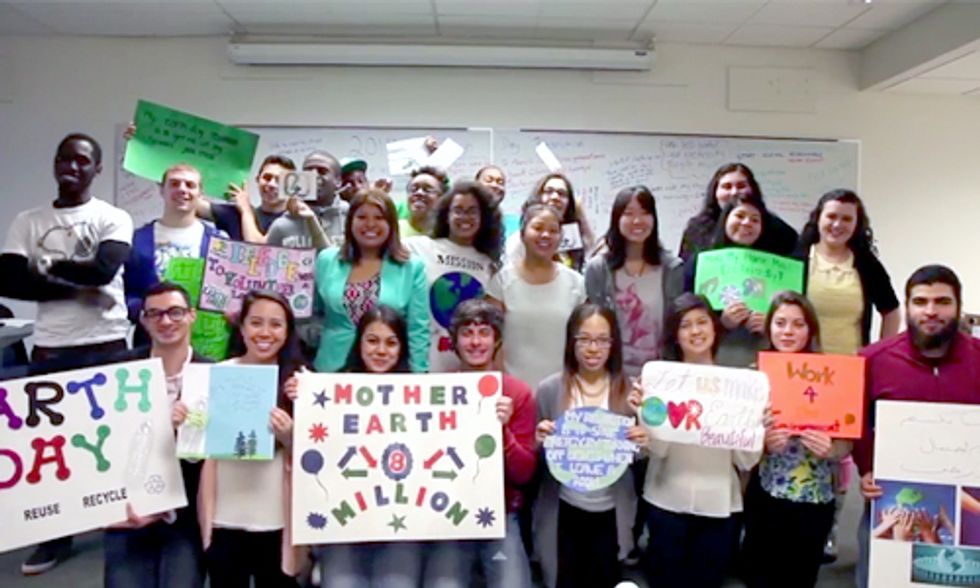 Nadia Palacios is a sophomore at Montgomery College and writer for The Advocate, the college newspaper for the Rockville campus. Her plans are to study journalism in D.C. at a four-year institution at either American University or George Washington University.

I walked into my parent’s cold bedroom to find my mother peering from under her covers at the T.V. This was always how she watched the news, so attentive to it that she didn’t notice me walk in. Her eyes were wide, glued to the screen. What was so compelling that my mother did not recognize my presence?

The feature story was about how radioactive filter socks were being dumped in Indian reservations in North Dakota. I gave it a second thought: “You’re telling me that radioactive material, the sort of stuff that can kill people, is being dumped somewhere that is populated?” It did not make sense.

My mom went on a rant. “It’s these damn politicians and how they can’t cooperate! These are the results! They can’t come to terms about anything because they’re too busy being a Republican or a Democrat!”

Not Just a Sociology Class

I signed up for Professor Sibilski’s Introduction to Sociology class for the spring semester. I will not lie; I was expecting the typical class structure. Then Professor Sibilski added his own twist to the course.

We’ve started small, but we will expand, and though I am only one, my voice will be united with my thirty classmates who soon will join a movement with the voice of millions.

“By the end of this course, I will make you all better, active citizens,” Dr. Sibilski announced to us.

I was not up for it. My mind clung to the argument, “It’s nine in the morning, I don’t want to deal with the extra stuff I did not sign up for.”

I understood that it was all for a good cause. But like most college students, I had (and still have) a thousand things to juggle at once. As passionate as Dr. Sibilski was about climate change, it was simply out of the question for me.

Meanwhile, in North Dakota, people are still walking by abandoned gas stations filled with radioactivity, as there is no room on Indian reservations to get rid of the contaminated filters.

A Word from the Wise Man

Every Monday, Wednesday and Friday morning I prepared myself for another lecture on how to use Facebook and YouTube to promote videos on climate change. The videos were called The Power of 8 Million or UMD Students Connect4Climate.

A nod of the head, “I got it.” Then I forget it all. What followed was schoolwork between classes with some caffeine boosts, then the bus ride home after my afternoon class.

My father would usually come home shortly after me. One day, despite being exhausted, he made burgers for my sister and me and we exchanged small talk. I remember that I mentioned to him a growing concern over my future, that I was scared at how quickly time flew.

We discussed it. Then dad said something that fit perfectly with the purpose of Dr. Sibilski’s class.

“I can’t wait for you two to change the world. That’s my American dream.”

As the class progressed, my attitudes changed. The awareness was there now. As I watched the news, I became more aware of stories like the ones from North Dakota, about how we are dangerously polluting the Earth.

Near the middle of the semester, a fellow classmate and I were asked to write a letter to the White House to support Dr. Sibilski's cause of climate change, which had become our cause as well. It was surprising to me that as I wrote my part of the letter, I had so much to say.

I went on for at least a full page about the concerns I had with climate change, the news stories I had heard about companies and factories recklessly abusing the Earth. I realized, however, that I had to leave room for my classmate’s words and had to erase several paragraphs.

It had dawned on me that evening as I wrote the letter that perhaps we are not as helpless as we think we are. Maybe, as a society, we have the tendency to toss the blame around as if we were playing a game of “Hot Potato.”

The energy in the class slowly started to pick up as we moved closer to filming day. Dr. Sibilski had asked us to be a part of a video project in which we stated where we were from and what our Earth Day resolution would be. The student directors were from the University of Maryland. Their video of our class was to be presented at film festivals in Australia, Russia and Singapore.

The class itself was starting to break out of its shell a little as some classmates were speaking up more. And some were even doing a little extra in terms of commenting and spreading the word. We were all getting comfortable with one another. One classmate, Suleiman Khan, wrote his own article about the course and climate change and got attention from all corners of the world.

Eventually I came to realize that I might not have a direct impact on what’s happening in North Dakota or what’s happening in Texas (water contamination due to fracking). But it’s not like we’re all completely incapable of doing something. If we don’t show that we care enough to at least promote a video and spread its message on climate change, who will?

I’m ashamed to say that I didn’t care that much about climate change before I signed up for Dr. Sibilski’s course. It was not something that was rubbed into my face everyday. But I guess that his constant drilling about responsibility initiated a small spark.

My classmates and I are only thirty people out of seven billion who populate the world. We’ve started small, but we will expand, and though I am only one, my voice will be united with my thirty classmates who soon will join a movement with the voice of millions.

Student Activist Implores World to ‘Raise Your Voice, Not the Sea Level’ in UNEP Competition-Winning Video

Do Documentary Films Play an Integral Role in Environmental Education?

Celebrating the Power of One in Fight Against Climate Change