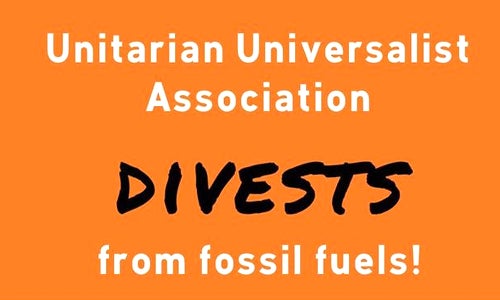 Following in the footsteps of the University of Dayton, the first Catholic school to divest from fossil fuels, the Unitarian Universalist Association (UUA) announced Saturday its resolution to do the same. 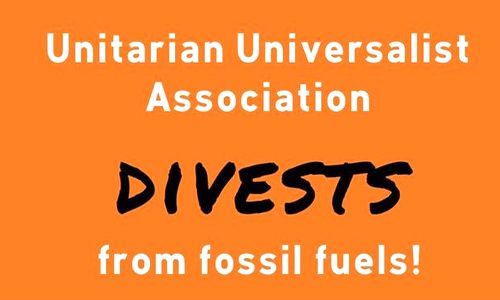 The faith-based organization of more than 1,000 congregations has about 2.9 percent of their $175 million investment dollars in fossil fuel companies under their UUA Common Endowment Fund (UUCEF), according to the Providence Journal. Saturday’s vote was overwhelmingly in favor of divestment.

“We are encouraged that the UUA can continue its longstanding successes in shareholder advocacy while helping to lead the divestment movement with the approval of today’s fossil fuel divestment resolution,” said David Stewart, co-chair of the UUA’s socially responsible investing committee. “We believe strongly that any effort that can change the current trajectory of climate change is a welcome improvement.”

Bill McKibben, founder of 350.org, tweeted his enthusiasm and appreciation over the weekend:

Oh yes!!! the Unitarian church, the whole thing, voted today to divest from fossil fuels. This is what momentum looks like

As Unitarians head off to services this morning, so many thanks from all of us for the bold decision to divest!

The resolution requires the UUA to:

“We, private citizens and the private and nonprofit sectors, need to take matters into our own hands and use every strategy we can to convince the government and public at large of our planetary emergency, and that we must act now,” said Terry Wiggins, a leader in pushing through the divestment decision.

According to the UUA, the organization has a long-standing history of activism in environmental justice. Most recently, the UUA has supported the new U.S. Environmental Protection Agency limits on carbon emissions for new and existing power plants, as well as worked to increase transparency in the executive office of Chevron Corp.