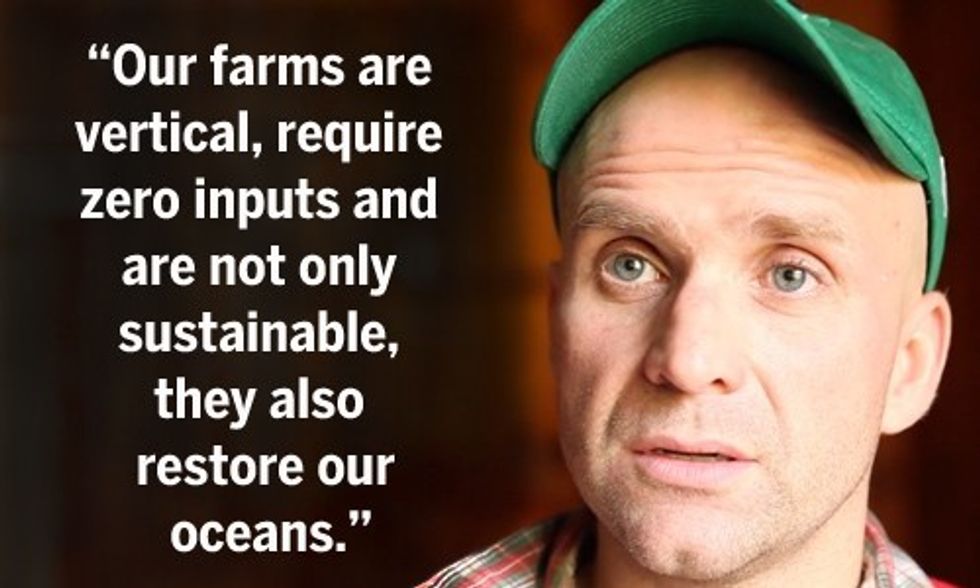 Bren Smith has set up what he calls "3D ocean farms," which "utilize the entire ocean column" to grow "restorative species," including scallops, clams, oysters and kelp. Smith says this makes the oceans cleaner, healthier and more habitable, while providing jobs and food.

He hasn't always been fishing that way. His story is one of "ecological redemption," Smith said in a TEDx Talk (see below) in 2013. He dropped out of high school when he was 14 to work on fishing boats, working "at the height of the industrialization of the oceans. We were ripping up entire ecosystems with our trawls. We were using evermore efficient technology to chase fewer and fewer fish deeper and deeper into the ocean. And I've personally thrown tens of thousands of pounds of dead bycatch back into the sea," he said.

But that all changed about 15 years ago when he started growing seaweed in the Long Island Sound, where he now grows 30 to 60 tons of it per year. Seaweed has been described as a superfood, but it's also really beneficial to the ecosystem.

"Seaweed farms also help clean the water from pollution like carbon dioxide and nitrogen," explains FastCoExist. "They help with storm protection. And they provide a way for fishermen to do something other than fishing at sea: creating new forms of manmade coastal ecosystem—farms centered around seaweed."

"Globally, the potential scale of seaweed farming is 600 times greater than any other method of cultivating algae," says Quartz. "Seaweed is finding many uses beyond food, from medicine to fuels, and it may be that seaweed farms will offer refuges for marine species under threat from increasing acidification." And scientists recently worked out how to cultivate green algae for biofuel in huge quantities at $50 a barrel, which is about the cost of crude oil.

It's hard to understate the value kelp has as a food source and a fuel source, as well as the role it can play in restoring ecosystems. Smith's kelp is even being used by Yale University's farm as a fertilizer, serving as a "bridge," as Smith puts it, between "land-based farming" and "sea-based farming."

Smith's Thimble Island Ocean Farm was created out of his project GreenWave, which just received a huge endorsement because it won the prestigious $100,000 2015 Fuller Challenge Prize from the Buckminster Fuller Institute.

Buckminster Fuller Insitute explains why Smith's project is so groundbreaking:

GreenWave's integrated model shifts the practice of aquaculture from growing vulnerable monocultures to creating vibrant ecosystems, which produce higher yields. The infrastructure is simple: seaweed, scallops and mussels grow on floating ropes, stacked above oyster and clam cages below. From these crops ocean farmers can produce food, fertilizers, animal feeds, pharmaceuticals, cosmetics, biofuels and much more.

This video courtesy of Patrick Mustain at Scientific American provides an excellent explanation of Smith's work: