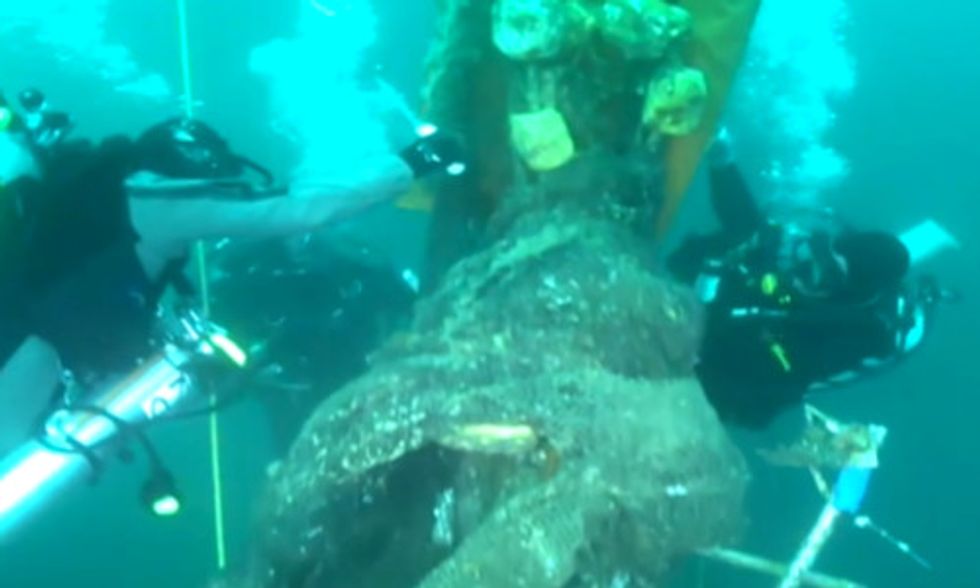 Marine life is threatened on so many fronts, including ocean acidification, warming temperatures, plastic pollution, overfishing and bycatch.

Another major problem is fishing nets. When fishing nets are lost in the sea, either by careless fishing companies or when ships sink, sea animals, including dolphins, sea lions and seals, get tangled in these nets and die.

ODA has been removing abandoned fishing gear on the ocean floor or attached to shipwrecks for the last 12 years. Crouch joins them as they free trapped sharks and sea lions from the fishing nets left behind on the 70-foot Infidel, which capsized in 2006 about a mile off the coast of Catalina Island with a full load of squid.

"The ship is shrouded in the 9,000-pound netting it was dragging when it sank" to the ocean floor, reports Crouch. Since the ship sunk, the net has become a "death trap" for marine life. "We're talking about millions of lives potentially in a large net like this," said Dr. Bill Bushing, a marine biologist who dives with ODA. "Each one plays a role in the ecological dynamics of the system."

Because the Infidel is so deep (150 feet down), the mission to extract the netting requires expert divers. Don Robarge, one of the scuba divers, says this will be his deepest dive yet. Crouch says, "It's a dangerous dive. Why do you risk your life for this?"

"We love animals and we love scuba diving," Robarge responds. "This gives us a chance to fine tune our skills, but we're here for the environment and the animals that are needlessly killed from this derelict fishing gear that's left in the ocean continuously. I'm disgusted with it frankly."

When the divers reach the shipwreck, they free any aquatic life that is tangled in the net and they attach inflatable bags to the cut sections of the net so they float to the surface.

The Ocean Defenders only had nine minutes at that depth to free as much of the net as they could. Watch to see if they were successful: