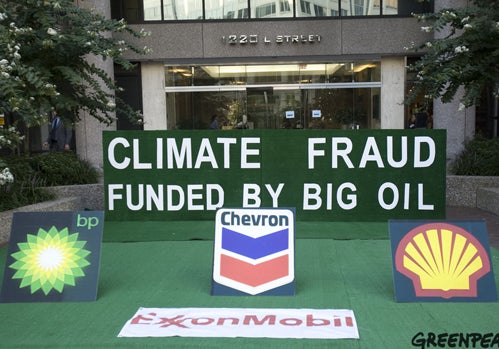 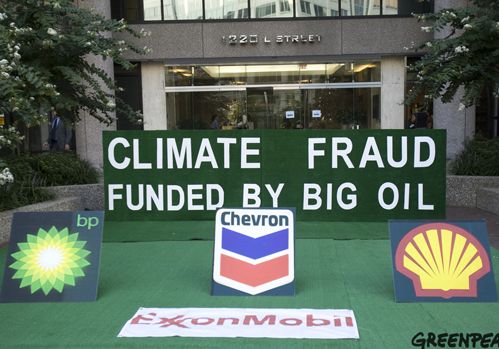 Recently, Greenpeace got a rare look behind the curtain at how Big Oil stages citizen support for huge oil companies, when activists got inside a television commercial shoot in Washington, D.C. The American Petroleum Institute (API), and their public relations firm Edelman, were filming a new series of television commercials that we learned API plans to air nationally on CNN starting in January. The ads, aimed at the 2012 elections, will aim to demonstrate authentic citizen support for the oil industry’s agenda.

Greenpeace disrupted API’s astroturf commercial plans by not following instructions and going off script, declaring support for a clean energy future and demanding an end to political interference by the oil industry’s lobbyists and PR firms.

Details of the CNN January ad campaign as described by API and other clips are posted below.

Activists (or citizens) were led through the wardrobe and makeup process, approved for looks by representatives from API and Edelman Blue Advertising, before waiting their turns to go on set. Participants were required to be registered voters, explained an API representative, to protect API from opponents who may inquire if actors stating “I vote” are actually eligible to do so. Other recruited actors were being watched by the industry representatives during their takes, repeating lines like “That (energy independence) will come from our own energy resources—like oil and natural gas.”

Late in the morning, the API Edelman team filmed three unexpectedly honest ‘citizens’ who made clear the script did not represent their real opinions on energy. Greenpeace researcher Connor Gibson of the PolluterWatch project repeated their scripted line, “I vote,” then declared, “But I am a clean energy citizen. I will not believe the lies and influence peddling of the American Petroleum Institute, which would leave you to believe that I am a citizen that is okay with giving my tax payer dollars to billionaires and millionaires that run oil companies, the most profitable industry on the planet.” Gibson stressed movement away from a “perpetual petroleum future” and finished his speech by telling Edelman Blue President Robert McKernan “we need clean sources of energy, like wind and solar.” Listen to Gibson’s full declaration and read the transcript, below.

In addition to Gibson, two other participants refused to recite API’s script. Peter Roquemore of the Sierra Student Coalition and Gabe Elsner, deputy director of the Checks and Balances Project showed up to the shoot with the expectation that they would provide their own assessments of American energy. Both decided not to participate once they were fed oil industry talking points on camera.