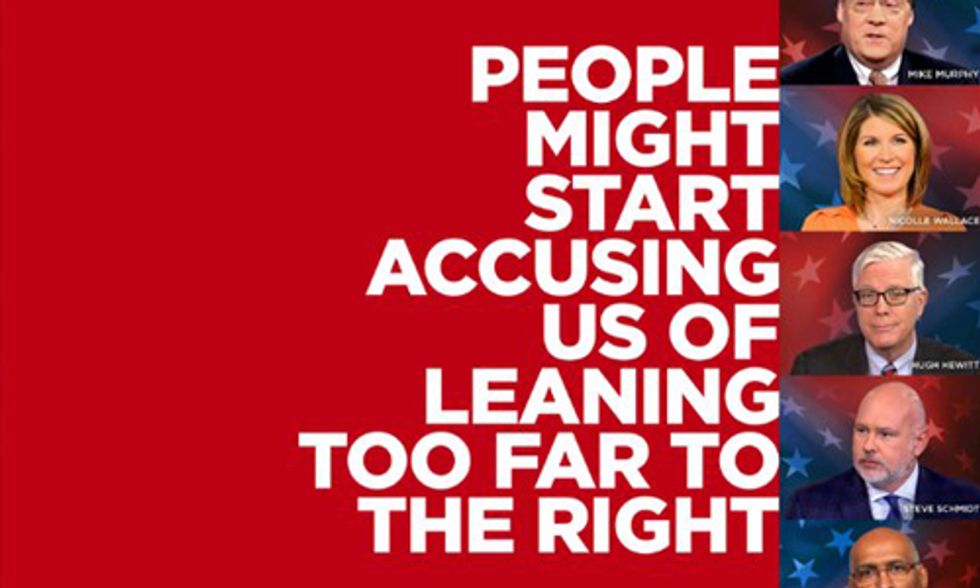 Cable TV network MSNBC has made headlines in recent days for apparently moving away from its “Lean Forward” progressive brand, catering instead to a more center-to-right-leaning crowd.

“People might start accusing us of leaning too far to the right,” the station says in a new advertisement featuring MSNBC's conservative personalities—an array of Republican identities such as Michael Steele, Steve Schmidt and Ben Ginsberg.

But on the issue of hydraulic fracturing (“fracking”) for shale oil and gas, documents from 2011 obtained under Oklahoma's Open Records Act demonstrate that the network saw itself as a promoter of the controversial drilling method and natural gas vehicles.

NBCUniversal, at the time, was owned on a 49-percent basis by the natural gas utility and electricity company General Electric (GE) and is now wholly owned by Comcast.

The documents, obtained from Oklahoma State University (OSU), relate to the filming of an episode of The Dylan Ratigan Show on the OSU campus in April 2011. The episode came two and a half years before the network announced in late-2013 that its website would run native advertisements (content that looks like original news) on behalf of fracking lobbying group America's Natural Gas Alliance (ANGA). ANGA is now part of the American Petroleum Institute (API).

That episode of Ratigan's show featured oil and gas industry hedge fund tycoon T. Boone Pickens, who now serves as a fundraiser for Republican Party presidential candidate Donald Trump and who was stumping at the time for his pro-fracking “Pickens Plan.” The emails offer a rare look inside the making of an episode of a popular MSNBC show and a glimpse into a future business relationship, too.

The April 2011 episode of Ratigan was part of a broader “Steel on Wheels” tour MSNBC pushed at the time featuring Ratigan, whose show is no longer on-air. The tour, conducted on a bus and catching media attention for being a sponsored partnership with steel company Nucor, looked to find “solutions to the most pressing problems facing America today.”

“I am committed to getting this country back on track for the benefit of all Americans and ‘Steel on Wheels’ is the perfect vehicle to show how we can make that happen,” Ratigan said in a statement announcing the partnership between Nucor and MSNBC. “There is no better partner for this than Nucor and their visionary CEO Dan DiMicco, a man who is as dedicated to his own extraordinary employees as he is to helping get all of America working again.”

The relationship between Nucor and MSNBC was described at the time by Ad Week as “a first of its kind partnership.” Mediaite, a media outlet that covers the U.S. media apparatus, described one on-air segment of the tour as something which “easily could have been confused for a human resources video to boost Nucor employee morale.”

“Steel on Wheels” focused on finding solutions to many problems ailing the U.S., including health care, education, manufacturing, public works and energy.

At the center of the energy portion sat T. Boone Pickens, the Pickens Plan, Clean Energy Fuels and promotion of natural gas vehicles. Days after the three-day (March 30-April 1) energy portion of the “Steel on Wheels” tour ended, Congress introduced the Pickens-promoted NAT GAS Act on April 6, which offered subsidies to the industry to produce gas-powered automobiles and ended up not passing.

A planning document for the three-day energy segment shows that anti-fracking voices, such as that of Josh Fox—director and producer of the two Gasland documentaries and of the forthcoming film How to Let Go of the World: and Love All the Things Climate Can't Change—would not have a slot on the three days of energy-focused episodes. Natural gas receives an explicit mention as a “solution.”

Though Josh Fox gets mentioned as a potential guest who will not receive an invitation, prospective guests listed on the document included climate change denier and U.S. Sen. Tom Coburn (R-OK), former Shell North America CEO John Hoffmeister and Pickens.

Fox ended up as a guest on the show on March 31, 2011. But he was treated in a hostile manner by Ratigan when Fox pointed out that Pickens had money riding on the fracking boom and that the fracking boom could lead to global climate change chaos, water impacts and human health impacts.

“I get it, you believe that natural gas will ruin the universe and can't be solved,” Ratigan exclaimed to Fox in closing out the segment. “I want to have a conversation to solve the problem with you. I'm not looking to have a propaganda speech from you more than I am from Boone Pickens or anybody else.”

Pickens though, interviewed the day before Fox on Ratigan's show, received a much friendlier reception.

“The goal of the Steel on Wheels Energy Summit is to capitalize on the emerging opportunity to address America's energy problem,” the document reads. “[With] [s]ignificant disruptions in the Middle East and unprecedented opportunities here in the U.S., Free America would culminate its quest to find jobs and solutions for America by highlighting ENERGY as a trillion-dollar problem that we CAN solve and in the process create jobs, capture trillions of value, and create lasting nation (sic) security—and it is (sic) problem both businesses and politicians are ready to tackle.”

On March 24, 2011, MSNBC public relations employee Tanya Hayre emailed Jay Rosser—vice president of public affairs for BP Capital, a hedge fund owned by Pickens—to introduce herself and get the ball rolling on logistics for the following week's episodes and the events surrounding them. In that email, she referred to the need to “drum up press” in service to “further promot[ing] our cause/discussion” and then asked if Pickens could speak with reporters in order to complete that task.

GE's business interests in natural gas and gas-powered vehicles went unmentioned in the segment, an interview between Ratigan and Pickens, which took place at OSU. OSU's football stadium is named after Pickens and he is a major donor to the university.

In that interview, Ratigan showered praise on Pickens and called him a “patriot” while not mentioning where Pickens makes his money: from both investing in the natural gas industry and owning a major natural gas vehicles fueling station company, Clean Energy Fuels Corporation, that was actively lobbying for the NAT GAS Act at the time.

“My recollection is that I was approached by Dylan’s team wanting to factor energy into one of their town halls,” Rosser said via email. “I connected them with OSU, Boone’s alma mater [but] didn't have any meaningful input into the program outside of Boone’s direct participation (i.e., speaking format, etc.).”

“GE is proud to be partnering with Clean Energy Fuels to develop natural gas infrastructure in the U.S. Clean Energy is an industry leader in pioneering a new way for America to fuel its vehicles and to further gain energy independence,” GE Chairman and CEO Jeff Immelt said in a press release announcing the deal. “With an abundance of cleaner, more affordable natural gas here in the U.S., this is an important opportunity for GE to join Clean Energy in changing the way America drives.”

The two companies would later sign another business deal in October 2013, linking them in the effort to beef up the number of natural gas-powered trucks on U.S. highways. GE also promotes its “CNG in a Box” (compressed natural gas) vehicles fueling station equipment on its website.

Lean Right: “They Already Do”

Cenk Uygur, founder and show host of the popular YouTube-based The Young Turks Network and former MSNBC show host, reacted to the news of MSNBC's looming rightward shift by giving a contrarian take on the announcement. In the past, Uygur said he left MSNBC when he was told by CEO Phil Griffin that “We’re the establishment, and it would be cool to be like outsiders, but we’re not, we’re insiders, and we have to act like it.”

Right-wing in the Fox News sense of the term? Not quite.

But right-leaning in terms of being a corporate-owned media outlet with business interests that often converge with the stories they cover? As the case of T. Boone Pickens, Dylan Ratigan and OSU shows, without a doubt.

“MSNBC is a good case study on the parameters of mainstream media. There are certain lines you can't cross and when people do, there's consequences,” Michael Arria, author of the book Medium Blue: The Politics of MSNBC,  said in an email. “Everyone I researched for my book seemed extremely earnest about what they're doing. Someone like Maddow seems genuinely convinced she can do any story she wants.”

Ratigan did not respond to multiple requests for comment.