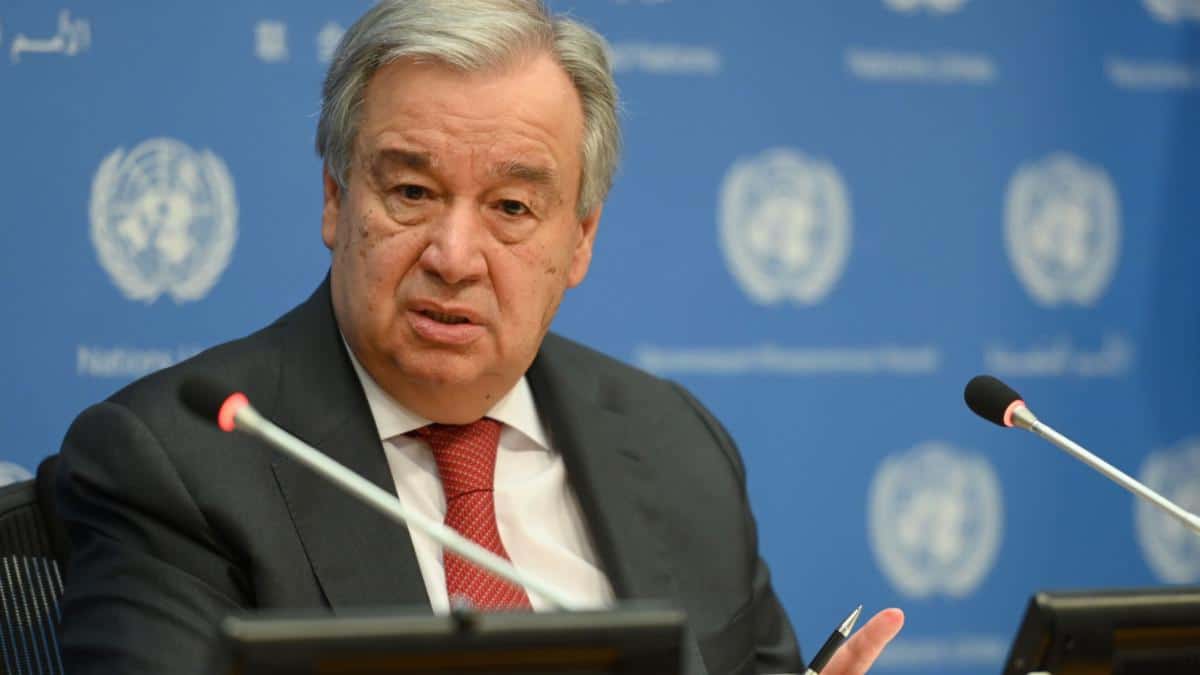 “The state of the planet is broken. Humanity is waging war on nature. This is suicidal.”

That’s how United Nations Secretary-General António Guterres began a Wednesday address at Columbia University, in which he reflected on the past 11 months of extreme weather and challenged world leaders to use the recovery from the Covid-19 pandemic as an opportunity to construct a better world free from destructive greenhouse gas emissions.

Guterres’ plea for countries to invest in a more just and sustainable future, transforming the economy and curbing climate change at the same time through the development of renewable energy among other green industries, coincided with the publication of two U.N. reports detailing the relationship between the continued extraction of fossil fuels and 2020’s extreme weather.

In its annual report on the state of the global climate, the World Meteorological Organization (WMO) said that “global temperatures from January to October were around 1.2 degrees Celsius above pre-industrial levels, putting 2020 on track to being one of the three warmest years on record,” Bloomberg Green reported Wednesday. “This decade will be the hottest on record, with the warmest six years all happening since 2015.”

The Associated Press noted as well that “the WMO’s report found global warming is worsening in all seven key climate indicators, but the problem is increasing human suffering in an already bad year.”

According to the report, “over 50 million people have been doubly hit [in 2020]: by climate-related disasters (floods, droughts, and storms) and the Covid-19 pandemic.” Guterres emphasized that “the impacts fall most heavily on the world’s most vulnerable people.”

“Those who have done the least to cause the problem are suffering the most,” the U.N. leader pointed out, including in the deeply unequal developed world where “the marginalized are the first victims of disasters and the last to recover.”

Biodiversity is collapsing. One million species are at risk of extinction. Ecosystems are disappearing before our eyes. Deserts are spreading. Wetlands are being lost. Every year, we lose 10 million hectares of forests. Oceans are overfished—and choking with plastic waste. The carbon dioxide they absorb is acidifying the seas. Coral reefs are bleached and dying. Air and water pollution are killing 9 million people annually—more than six times the current toll of the pandemic. And with people and livestock encroaching further into animal habitats and disrupting wild spaces, we could see more viruses and other disease-causing agents jump from animals to humans.

The U.N. leader also spelled out the catastrophic contours of the climate emergency:

Ocean heat is at record levels. This year, more than 80 percent of the world’s oceans experienced marine heatwaves. In the Arctic, 2020 has seen exceptional warmth, with temperatures more than 3 degrees Celsius above average—and more than 5 degrees in northern Siberia. Arctic sea ice in October was the lowest on record—and now re-freezing has been the slowest on record. Greenland ice has continued its long-term decline, losing an average of 278 gigatons a year. Permafrost is melting and so releasing methane, a potent greenhouse gas. Apocalyptic fires and floods, cyclones and hurricanes are increasingly the new normal.

“Covid-19 lockdowns have temporarily reduced emissions and pollution,” Guterres added, “but carbon dioxide levels are still at record highs—and rising,” along with other greenhouse gases.

Despite the gravity of the situation, “climate policies have yet to rise to the challenge,” the U.N. leader lamented.

In a special report on the production gap—”the discrepancy between countries’ planned fossil fuel production and global production levels consistent with limiting warming to 1.5 to 2 degrees Celsius”—researchers from the U.N. Environment Program (UNEP), the Stockholm Environment Institute (SEI), and other institutions explained that the world must decrease fossil fuel production by 6 percent per year between 2020 and 2030 to limit catastrophic global warming.

Instead, countries are planning on increasing fossil fuel production by 2 percent per year, putting the world on pace to burn more than twice the amount of carbon by the end of the decade than deemed compatible with a 1.5 degree Celsius pathway.

“As we seek to reboot economies following the Covid-19 pandemic, investing in low-carbon energy and infrastructure will be good for jobs, for economies, for health, and for clean air,” said UNEP executive director Inger Andersen.”Governments must seize the opportunity to direct their economies and energy systems away from fossil fuels, and build back better towards a more just, sustainable, and resilient future.”

Ivetta Gerasimchuk, a sustainable energy expert at the International Institute for Sustainable Development and a co-author of the production gap report, explained to AP that “investing in oil, coal, and gas no longer makes economic sense because renewable energy is becoming cheaper than fossil fuels,” especially after what she called “the pandemic-driven demand shock and the plunge of oil prices this year.”

Nevertheless, she told AP, “We see that instead of governments letting these fossil fuel projects die, they resurrect them from the dead,” channeling billions of dollars in public subsidies to the production and consumption of fossil fuels.

Guterres implored government officials to treat the trillions of dollars being invested in the post-coronavirus crisis recovery process as a mechanism to catapult the world onto a more equitable, inclusive, and sustainable trajectory.

He stated unequivocally that devoting more funds to dirty energy than to clean energy at this pivotal moment in history, which locks in “unsustainable fossil fuel pathways,” is an injustice inflicted on future generations as well as society’s most vulnerable members who bear the least responsibility for climate risks and disruptions.

“The science is clear,” Guterres told the BBC. “Unless the world cuts fossil fuel production by 6 percent every year between now and 2030, things will get worse. Much worse.”

The solution, said Michael Lazarus, director of the SEI’s U.S. Center and a co-author of the report on the production gap, is “government policies that decrease both the demand and supply for fossil fuels and support communities currently dependent on them.”

Gerasimchuk acknowledged that “this may be one of the most challenging undertakings of the 21st century, but it’s necessary and achievable.”