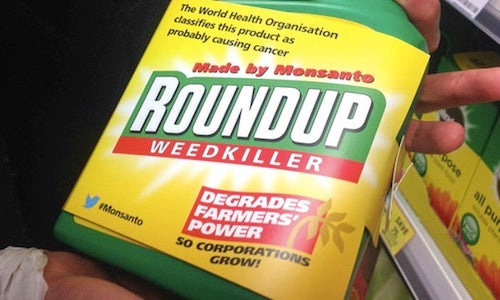 Does glyphosate cause cancer or not? A new joint report from experts at the United Nation’s Food and Agriculture Organization (FAO) and the World Health Organization’s (WHO) Meeting on Pesticide Residues (JMPR) has concluded that the controversial chemical is “unlikely to pose a carcinogenic risk to humans from exposure through the diet.”

The new review appears to contradict the WHO’s International Agency for Research on Cancer (IARC), which concluded in March 2015 that glyphosate “probably” causes cancer in humans.

So is there a mixup between the two bodies? In a Q&A issued alongside the new report, the WHO acknowledged that the conclusions arrived at by the IARC and the FAO/JMPR were “different, yet complementary.” The IARC assessed glyphosate as a “hazard” while the joint group looked at “risk.”

The WHO said that while the “IARC reviews published studies to identify potential cancer hazards, it does not estimate the level of risk to the population associated with exposure to the hazard.” On the other hand, the JMPR “conducts an evaluation or a re-evaluation of the safety of that chemical as it is used in agriculture and occurs in food.”

Wired further explained the differences between the two assessments:

The IARC studies whether chemicals can cause cancer under any possible situation—realistic or not—while the joint meeting’s report looks at whether glyphosate can cause cancer in real-life conditions, like if you eat cereal every morning made from corn treated with glyphosate. One of these reports is, by design, much more relevant to your life than the other.

The IARC is also, by design, not supposed to make recommendations to the public. It assesses “hazard,” which in scientific jargon, means something very different than “risk.” David Eastmond, a toxicologist at the University of California, Riverside, uses sharks to illustrate the difference. If you have people gawking at sharks swimming around a tank in an aquarium, the sharks are a hazard, but they pose little risk. If you have a surfer on the beach with a shark, now that shark is both a hazard and a risk.

To the IARC, a shark has sharp teeth and powerful jaws, and the agency doesn’t care if you’re at the beach or at an aquarium. “The problem with using hazard is that it may bear no immediate relation to anything in the real world,” says Geoffrey Kabat, a cancer epidemiologist at the Albert Einstein College of Medicine.

The FAO/JMPR also said that glyphosate is unlikely to be genotoxic in humans, which means it won’t harm a cell’s genetic material and lead to cancer. According to the groups, glyphosate has an acceptable daily intake of up to 1 milligram for every kilogram of body weight. Two other pesticides reviewed by the committee, diazinon and malathion, were also found to be unlikely to be carcinogenic.

Glyphosate is the main ingredient in Monsanto‘s blockbuster product, Roundup, and is also found in herbicides manufactured by Syngenta and Dow. The chemical is applied to “Roundup Ready” crops around that world that are genetically modified to resist applications of the powerful weedkiller.

Monsanto has vehemently defended the safety of the product ever since the IARC issued their report last year and has demanded a retraction from WHO. Yesterday, the St. Louis-based company issued a statement following the new review, saying they were “not surprised by JMPR’s positive conclusion.”

“We welcome this rigorous assessment of glyphosate by another program of the WHO, which is further evidence that this important herbicide does not cause cancer,” Phil Miller, Monsanto’s vice president for global regulatory and government affairs, said. “IARC’s classification was inappropriate and inconsistent with the science on glyphosate. Based on the overwhelming weight of evidence, the JMPR has reaffirmed the findings of regulatory agencies around the world that glyphosate is unlikely to pose a cancer risk.”

Greenpeace EU has questioned whether the new assessment from the FAO/JMPR has been muddied with industry ties.

In a press release, the environmental group alleges that at least two experts involved in the evaluation, Alan Boobis and Angelo Moretto, have ties to the International Life Sciences Institute (ILSI) in Europe, which “receives a majority of its operating and research funding from private companies, including glyphosate producers Dow and Monsanto,” and that “ILSI’s Health and Environmental Sciences Institute (HESI) is primarily funded by private companies, including glyphosate producers Dow, Monsanto and Syngenta.”

Alan Boobis is currently the Vice-President of ILSI Europe. He is the co-chair of the RISK21 project run by ILSI’s Health and Environmental Sciences Institute (HESI). Boobis has been an active member of ILSI over many years and also acted as a consultant for companies such as Sumitomo Chemical.

Angelo Moretto is a member of the steering team of the RISK21 project. He is also a member of the HESI Board of Trustees. Moretto resigned from an EFSA panel on pesticides after reportedly failing to declare a financial interest related to the assessment of chemical substances.

Food-industry watchdog group U.S. Right to Know (USRTK) also highlighted in a report posted last week that the ILSI’s board of trustees includes executives from Monsanto, Syngenta, DuPont, Nestle and others. The Institute also counts a long list of global food and chemical corporations as part of its long list of member and supporting companies.

According to the USRTK report:

Internal ILSI documents, obtained by a state public records request, suggest that ILSI has been generously funded by the agrichemical industry. One document that appears to be ILSI’s 2012 major donor list shows total contributions of $2.4 million, with more than $500,000 each from CropLife International [an international agribusiness trade association] and from Monsanto.

USRTK also named JMPR panel member Aldert Piersma, a senior scientist at the National Institute for Public Health and the Environment in the Netherlands and an advisor to ILSI’s HESI projects.

A coalition of environmental and consumer groups—Natural Resources Defense Council, Friends of the Earth US, Friends of the Earth Europe, the Center for Biological Diversity, the Center for Food Safety, Pesticide Action Network of North America, Pesticide Action Network UK, Food & Water Watch and Toxic Free North Carolina—signed a joint letter in June to urge the WHO to “ensure that the panel is free from conflicts and other biases that may unduly influence the work of the panel.”

“The JMPR’s analysis may have significant impacts to those with a financial interest in selling glyphosate-based products, thus we are very concerned that several members of the task force who may have conflicts of interest,” said Lori Ann Burd, Environmental Health Director at the Center for Biological Diversity.

“Time and time again we have seen corporate interests influence major decisions affecting the health of consumers and the environment,” Wenonah Hauter, executive director of Food & Water Watch, said. “We will not stand by and watch WHO-IARC’s conclusion on glyphosate become watered down due to the presence of task force members tied to major biotech firms. Farmers, farmworkers and communities who live and work near farms sprayed with glyphosate are depending on a rigorous, independent review of this chemical and the WHO must provide it.”

Greenpeace EU also alleges that most scientists involved in EFSA’s glyphosate assessment refused to be named.

“The agencies contradicting the WHO cancer warning seem to either rely on officials who prefer not to be named, or lack a watertight policy to protect their impartiality,” Greenpeace EU food policy director Franziska Achterberg said. “Any decision affecting millions of people should be based on fully transparent and independent science that isn’t tied to corporate interests. It would be irresponsible to ignore the warnings on glyphosate and to re-licence this pesticide without any restrictions to protect the public and the environment.”

Glyphosate is at the forefront of major debate in the U.S. and the UK.

The U.S. Environmental Protection Agency (EPA), which has reviewed glyphosate several times before and concluded it has “low toxicity for humans,” is at the center of an investigation after the EPA’s Cancer Assessment Review Committee published then suddenly pulled a report online last month about glyphosate concluding that the chemical is not likely carcinogenic to humans. The EPA said that the report was “inadvertently” released and its “assessment will be peer reviewed and completed by end of 2016.”

Monsanto is also facing a mounting number of glyphosate-cancer lawsuits, including a new one filed by four Nebraskan agricultural workers who claim that Roundup gave them non-Hodgkin lymphoma after many years of exposure. The plaintiffs have also accused Monsanto of purposely misleading consumers about the safety of its $4.8 billion product.

Meanwhile in Europe, the European Food Safety Authority (EFSA) issued their own report on glyphosate in November saying that it is “unlikely to pose a carcinogenic hazard to humans,” contradicting the IARC’s report. The opposing conclusions have touched off intense controversy as the weedkiller is due to for a decision on re-licensing in the European Union.

Later this week, the European Commission—the executive body of the European Union—will meet to discuss relicensing of glyphosate in the EU. As EcoWatch reported, the commission reportedly plans to ‘OK’ the chemical for another nine years despite opposition from European Parliament, which voted on April 13 to oppose EU relicensing. Countries such as France, Sweden, Italy, the Netherlands and now Germany, as well as 1.4 million people have called on an EU ban of glyphosate.

Glyphosate is the “most widely applied pesticide worldwide,” and it is so ubiquitous that traces of the chemical can be found in human urine. The Green Party of European Parliament recently announced results of their “MEPee” test and found that 48 MEPs from 13 different European Union countries tested positive for glyphosate reside in their urine.

“On average, the MEPs had 1.7 micrograms/liter of glyphosate in their urine, 17 times higher than the European drinking water norm (0.1 microgram/litre). This means that everyone we tested was way above the limit for residues of pesticides in drinking water,” the party noted.

Results of Glyphosate Pee Test Are in 'And It's Not Good News' https://t.co/WoVS1BSn8S @TrueFoodNow @GMWatch