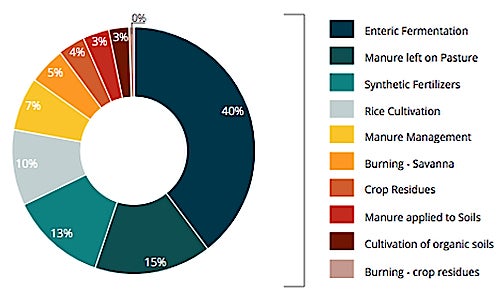 New Food and Agriculture Organization (FAO) estimates of greenhouse gas data show that emissions from agriculture, forestry and fisheries have nearly doubled over the past fifty years and could increase an additional 30 percent by 2050, without greater efforts to reduce them.

This is the first time that FAO has released its own global estimates of greenhouse gas (GHG) emissions from agriculture, forestry and other land use contributing to the Fifth Assessment Report of the Intergovernmental Panel on Climate Change (IPCC).

Agricultural emissions from crop and livestock production grew from 4.7 billion tons of carbon dioxide equivalents (CO2 eq)—a metric used to compare emissions from different greenhouse gases based on their global warming potential—in 2001 to more than 5.3 billion tons in 2011, a 14 percent increase.  The increase occurred mainly in developing countries, due to an expansion of total agricultural outputs.

Meanwhile, net GHG emissions due to land use change and deforestation registered a nearly 10 percent decrease over the 2001-2010 period, averaging some 3 billion tons CO2 eq/yr over the decade. This was the result of reduced levels of deforestation and increases in the amount of atmospheric carbon being sequestered in many countries.

Averaged over the 2001-2010 period, agriculture, forestry and other land uses emissions break down as follows:

In addition to these emissions, some two billion tons CO2 eq/yr were removed from the atmosphere during the same time frame as a result of carbon sequestration in forest sinks.

FAO’s data based on country reports show that while those emissions continue to increase, they are not growing as fast as emissions from fossil fuel use in other sectors, so the share of agriculture, forestry and other land uses out of total anthropogenic emissions is actually decreasing over time.

The largest source of GHG emissions within agriculture is enteric fermentation—when methane is produced by livestock during digestion and released via belches—this accounted in 2011 for 39 percent of the sector’s total GHG outputs. Emissions from enteric fermentation increased 11 percent between 2001 and 2011. 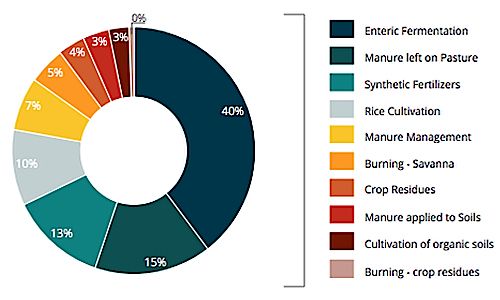 Emissions generated during the application of synthetic fertilizers accounted for 13 percent of agricultural emissions (725 Mt CO2 eq.) in 2011, and are the fastest growing emissions source in agriculture, having increased some 37 percent since 2001.

Greenhouse gases resulting from biological processes in rice paddies that generate methane make up 10 percent of total agricultural emissions, while the burning of savannahs accounts for five percent.

In 2011,  44 percent of agriculture-related GHG outputs occurred in Asia, followed by the Americas (25 percent), Africa (15 percent),  Europe (12 percent), and Oceania (4 percent), according to FAO’s data. This regional distribution was fairly constant over the last decade. In 1990 however, Asia’s contribution to the global total (38 percent) was smaller than at present, while Europe’s was much larger (21 percent).

Figures for Energy Use

The new FAO data also provides a detailed view of emissions from energy use in the agriculture sector generated from traditional fuel sources, including electricity and fossil fuels burned to power agricultural machinery, irrigation pumps and fishing vessels.

Designing responses will require detailed assessments of both emission data and mitigation options. For instance, FAO is already generating disaggregated assessments along supply chains and analyzing the effectiveness of comprehensive mitigation interventions in the livestock sector.

“FAO’s new data represent the most comprehensive source of information on agriculture’s contribution to global warming made to date,” said Francesco Tubiello of FAO’s climate, energy and tenure division. “Up to now, information gaps have made it extremely difficult for scientists and policymakers to make strategic decisions regarding how to respond to climate change and has hampered efforts to mitigate agriculture’s emissions.”

The FAOSTAT emissions database was developed with financial support from the governments of Germany and Norway.

Below, a short interview with Francesco Tubiello of FAO on agriculture and greenhouse gas emissions: