If One Appointee Gets His Way, UN Could Recognize Healthy Environment as Human Right 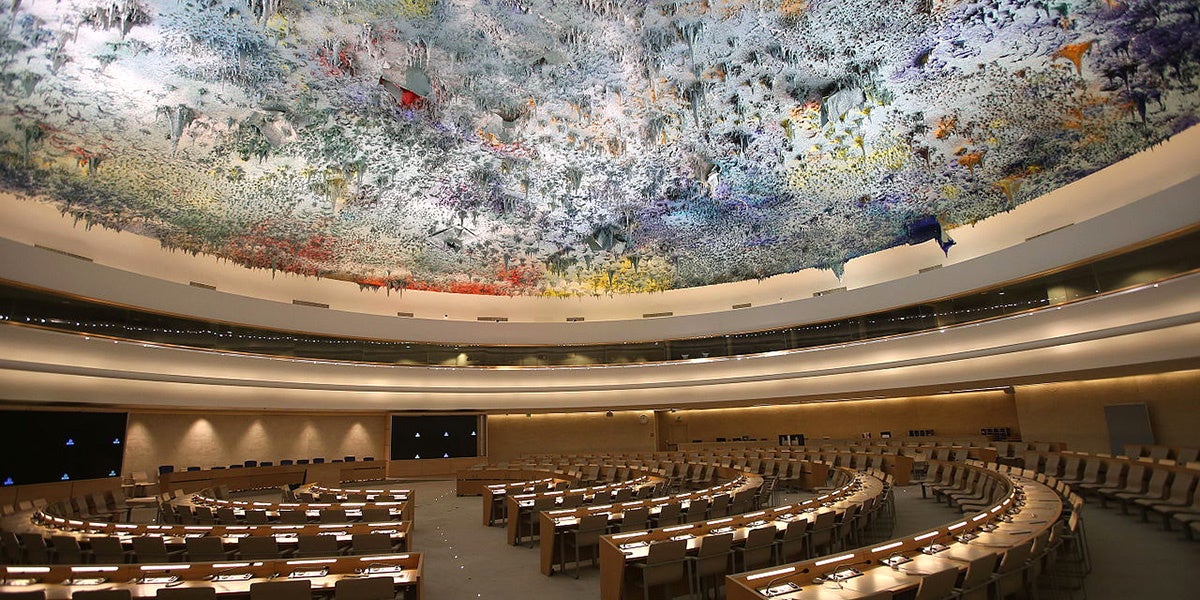 John H. Knox, the UN special rapporteur on human rights and the environment, delivered a statement March 5 to the Human Rights Commission in Geneva urging the UN to enshrine a healthy environment as a human right.

Here's the text of my statement to the Human Rights Council on Monday, 5 March, calling for the UN to recognize the human right to a healthy environment: https://t.co/HowP71slNe
Here's a video of the presentation and the ensuing dialogue with the Council: https://t.co/2BWrfPcVEY

Knox, who has spent the past five years researching the intersection between human rights and environmental concerns, now calls for a UN resolution formally connecting the two.

Knox further noted that 100 countries have already recognized a right to a healthy environment in their constitutions. The UN still has not.

One of the reasons Knox wants a formal resolution is to pressure governments to defend activists who protect natural and community resources, and are subject to violence and intimidation in many parts of the world.

According to a report by The Guardian and Global Witness, 197 nature defenders lost their lives in 2017 alone. “If we can’t protect them, then how can we protect the environment we all depend on,” Knox told The Guardian.

In his report, Knox explained how an unhealthy environment impacts children especially, since they are still developing and have very little control over their surroundings. Pollution and other hazards kill more than 1.5 million children under five every year.

“There can be no doubt that environmental harm interferes with a host of children’s rights, including their rights to life, health and development, food, housing, water and sanitation, play and recreation,” he wrote.

Sebastien Duyck, senior attorney at the Center for International Environmental Law, endorsed Knox’s recommendation. “Seventy years after the adoption of the Universal Declaration of Human Rights, the global recognition of this right and the provision of effective remedies are now a matter of utmost urgency for frontline communities exposed to climate–induced impacts, environmental defenders, and vulnerable groups exposed to toxic and hazardous substances,” he said in a press release.

This report comes three months from the end of Knox’s tenure in the position; it is not known who will replace him, though some have suggested actor and climate activist Leonardo DiCaprio, The Guardian reported.

As part of his report, Knox outlined 16 “Framework Principles on Human Rights and the Environment” that lay out states’ duties under human rights law as they pertain to a healthy environment.

They include responsibilities relevant to nature defenders, such as No. 4, “States should provide a safe and enabling environment in which individuals, groups and organs of society that work on human rights or environmental issues can operate free from threats, harassment, intimidation and violence,” and No. 9, “States should provide for and facilitate public participation in decision-making related to the environment and take the views of the public into account in the decision-making process.”

No. 15 urges countries to “comply with their obligations to indigenous peoples,” who are often on the frontline of environmental struggles. Nearly 40 percent of the environmental defenders murdered in 2016 were indigenous, Global Witness reported.

Some principles hold up a citizen’s rights to know the truth about their environment: No. 6 calls for “education and public awareness on environmental matters” and No. 7 for “public access to environmental information.”

The Trump administration, with its disregard for the concerns and well-being of the Dakota Access Pipeline protesters and its censoring of climate-change information on government websites, would not fair well judged by such a framework if it were adopted.