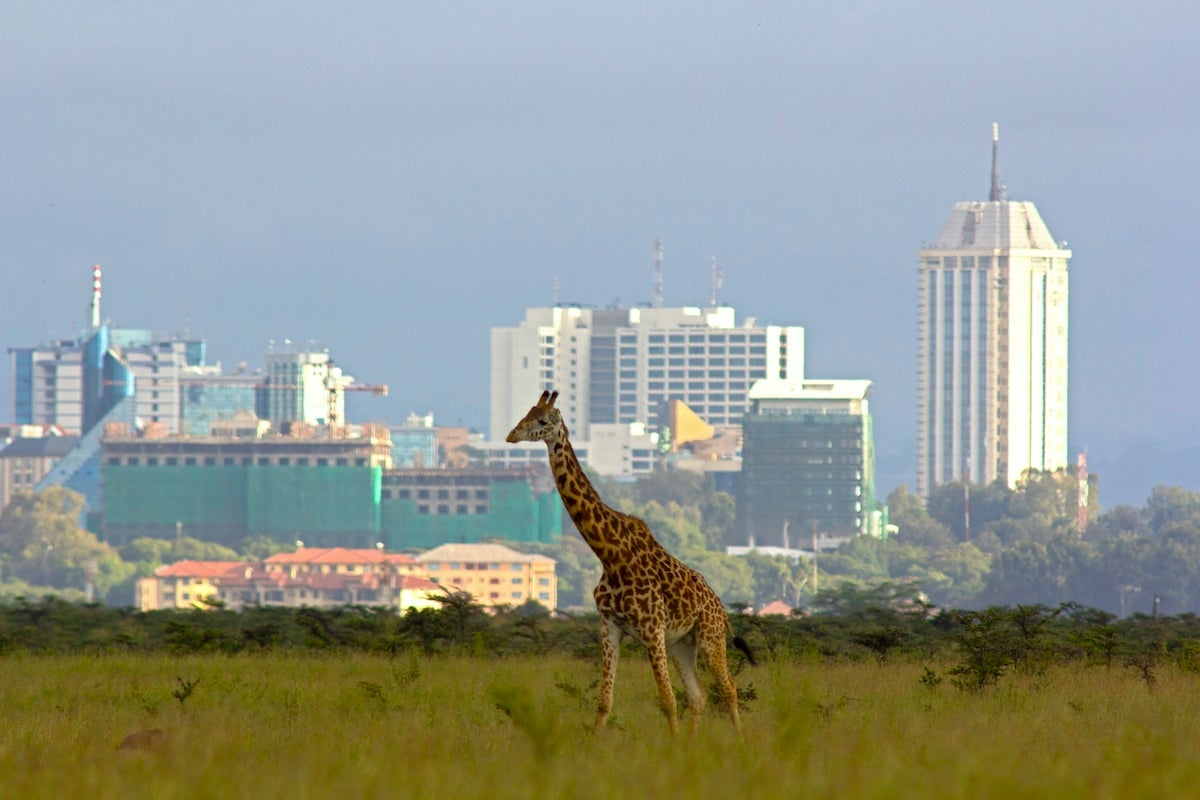 A giraffe in Nairobi National Park in Kenya with the city skyline in the background. The UN is encouraging cities to embrace nature-based climate solutions such as increased urban forests, green belts and parks. WLDavies / E+ / Getty Images

If you’ve ever sweated through an urban heat wave, it won’t be hard for you to understand why cities are incredibly vulnerable to the climate crisis. Cities are heating twice as fast as the global average, and by 2100, they could be a mean of four degrees Celsius hotter than they are now.

To help turn down the heat, the UN Environment Programme and its non-profit and university partners have launched a challenge at this year’s COP27 UN climate conference in Sharm El-Sheikh, Egypt, for vulnerable urban areas in the Global South to embrace nature-based solutions like increased urban forests, green belts and parks.

“We have come to COP27 at a time of global crisis, but these crises are a reason to increase our climate ambition, not reduce it. The Challenge’s goal — scaling up nature-based solutions to tackle climate change impacts in cities — is an important one,” Manuel Pulgar-Vidal, global lead for climate and energy at WWF — one of the groups behind the initiative — said in a press release emailed to EcoWatch. “Cities play a key role in avoiding the most severe impacts of global warming and it is important that we champion ambitious and sustainable efforts to mitigate and adapt to the effects of climate change.”

High temperatures are a major threat to public health in cities. The urban heat island effect occurs because cities build over pre-existing nature with heat-absorbing materials used to pave roads and construct edifices, according to the U.S. Environmental Protection Agency (EPA). This exposes city dwellers — especially those in majority minority or low-income neighborhoods — to a greater risk of heat-related illness and death.

Because higher urban heat is linked to the climate crisis, finding a solution is not as simple as expanding access to air conditioning, as a 2021 Lancet article titled “Health in a world of extreme heat” pointed out. That’s because it burns energy that contributes to global heating and it is often unaffordable for the most vulnerable. Instead, the authors recommended nature-based cooling solutions.

“Because extreme heat has greater effects on the health of people in urban environments, green spaces are crucial for cooling in cities, but also provide co-benefits: they reduce exposure to air and noise pollution, relieve stress, provide a setting for social interaction and physical activity, and sequester carbon,” the study authors wrote.

UNEP is pursuing these solutions through the Cool Coalition, a group that also includes WWF, EforALL, Mission Innovation, RMI, the World Resources Institute, the University of Oxford and Durham University, among others. The coalition announced the Beat the Heat: Nature for Cool Cities Challenge on Wednesday.

The challenge has three goals, according to the coalition website:

The challenge would see city and regional governments in the Global South pledge to increase the relative number of nature-based solutions in their urban areas by 2030 and show evidence that progress has been made by 2025. Pledgers would also have to set quantitative and financial targets and promise three concrete implementation actions.

The first pledge was made by Governor of Homa Bay County in Kenya, Her Excellency Gladys Wanga, who promised to incorporate nature-based solutions into Homa Bay’s affordable housing. The full list of pledges and their financial backers will be announced at next year’s COP28 climate conference.

“To make peace with nature, we need to rebuild our cities with nature in mind,” Sheila Aggarwal-Khan, director of UNEP’s Economy Division, said in the press release. “But truly replicable nature-based solutions require partnership between local governments, the private sector, experts, and practitioners. It is decisive that financial institutions, investors, and businesses step up and help make this vision a reality.”