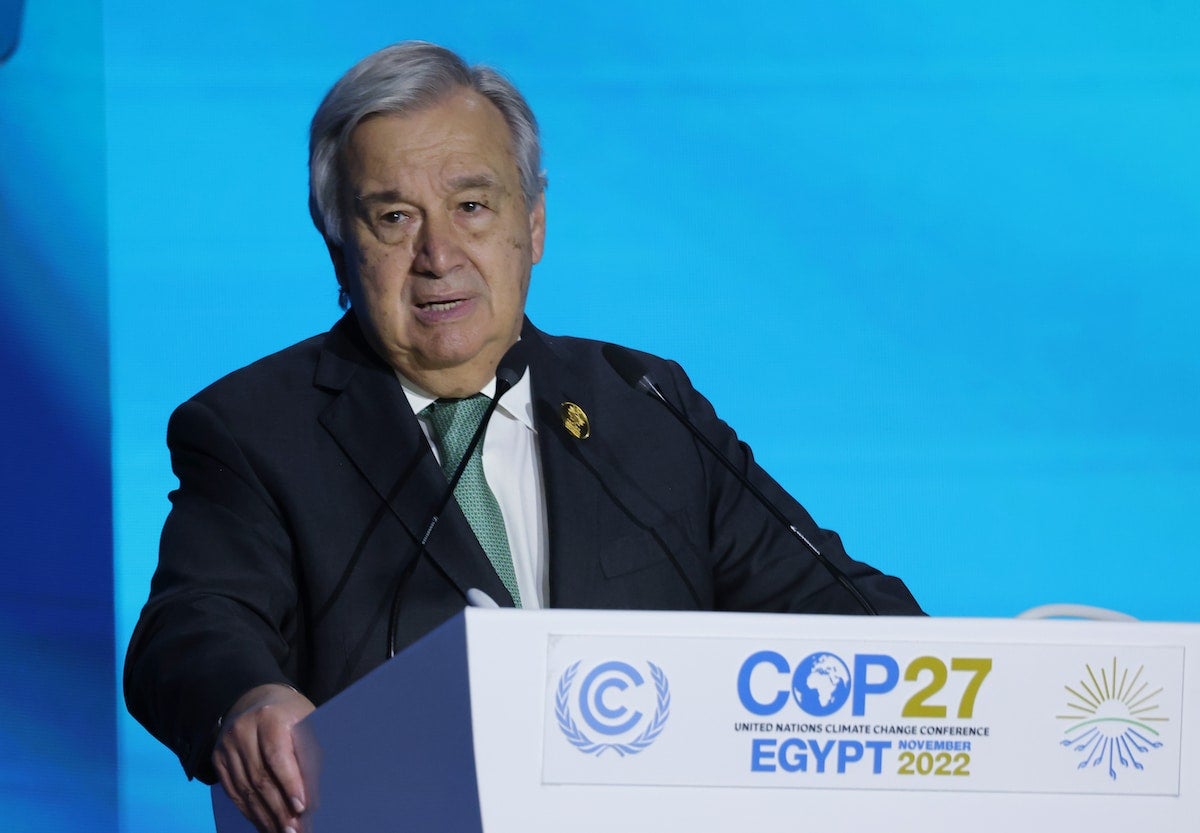 The latest round of UN climate change negotiations began in Sharm el-Sheikh, Egypt with an urgent warning about the necessity of acting rapidly to avoid the worst impacts of the climate crisis.

The conference, otherwise known as COP27, kicked off Sunday, November 6, with a procedural opening followed by the World Leaders Summit that launched Monday and concludes Tuesday, according to the UN Framework Convention on Climate Change (UNFCCC) website. It was on the first day of this gathering of heads of state that UN Secretary-General António Guterres delivered an uncompromising speech about the consequences of failure.

“We are in the fight of our lives and we are losing. Greenhouse gas emissions keep growing. Global temperatures keep rising. And our planet is fast approaching tipping points that will make climate chaos irreversible,” Guterres said, according to a UN transcript. “We are on a highway to climate hell with our foot still on the accelerator.”

The conference comes at a fraught time for the global fight against the climate crisis. A series of UN reports released ahead of the talks painted a dire picture. The World Meteorological Organization found that atmospheric concentrations of the three main greenhouse gases were at record levels. Yet current policies would put the world on track for 2.8 degrees Celsius of warming above pre-industrial levels by 2100, and this would only fall to 2.4 to 2.6 degrees Celsius of warming if countries abided by their emissions-reduction pledges updated in the wake of last year’s COP26 climate conference, the UN Environment Programme’s Emissions Gap Report found. This is much higher than the Paris agreement goal of limiting warming to 1.5 degrees Celsius above pre-industrial levels, which scientists say is necessary to avoid the worst impacts of the climate crisis.

“The science is clear: any hope of limiting temperature rise to 1.5 degrees means achieving global net zero emissions by 2050,” Guterres said. “But that 1.5 degree goal is on life support — and the machines are rattling. We are getting dangerously close to the point of no return.”

When it comes to adaptation, the needs of developing countries are five to 10 times greater than current funds support, according to the UNEP’s Adaptation Gap report. Despite this, the world is already experiencing extreme weather effects at the current 1.1 degrees of warming, such as devastating flooding in Pakistan this summer and deadly heat waves throughout 2022. Still, these crises have had to compete for international attention with ongoing recovery from the coronavirus pandemic and the energy and cost-of-living crises spurred by Russia’s invasion of Ukraine in February. However, Guterres argued that these events could not be an excuse for “backsliding or greenwashing.”

He argued that the rise in energy prices — caused by Russia’s reducing the gas flow to Europe — only showcased the dangers of a fossil fuel-based energy system.

Another major point of contention at COP27 is the divide between wealthier nations that have done more historically and currently to contribute to the climate crisis and poorer nations that are disproportionately vulnerable to its impacts. Developing countries are frustrated that developed nations have dragged their feet at both reducing emissions and sending them financial aid to transition away from fossil fuels and prepare for climate impacts, according to The Guardian. A major point of contention at the conference is expected to be the question of whether and how much developed nations should help developing nations pay for the inevitable loss and damage caused by global warming. This issue has been added to the COP agenda for the first time as of Sunday, as VOA reported.

In his speech, Guterres urged rich and poor nations to come together and form a Climate Solidarity Pact. This pact would include:

Guterres argued that the U.S. and China, as the world’s two largest economies, should take the lead in promoting this pact. The two countries are also the biggest contributors to the climate crisis. China leads the U.S. in terms of current emissions, according to the U.S. Environmental Protection Agency, while the U.S. is responsible for more emissions historically, according to Carbon Brief.  However, the two countries are currently in conflict over Taiwan, which led China to cancel bilateral climate talks with the U.S. recently, as Reuters reported.

This is the sort of conflict that Guterres argued the world has no time for.

“Humanity has a choice:  cooperate or perish,” he said. “It is either a Climate Solidarity Pact — or a Collective Suicide Pact.”