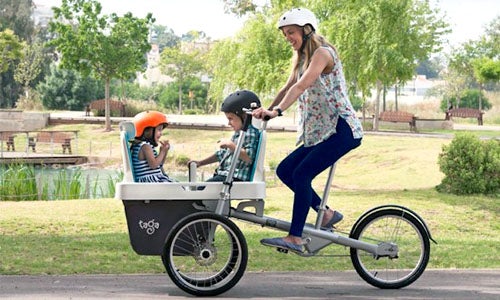 You’ve heard of a bicycle built for two, but what about three or four? The Taga 2.0 is a three-wheeled, front-mounted cargo bike designed to fit two kids facing forwards, backwards or even towards each other. A third child seat can be added to the back with a rear rack. 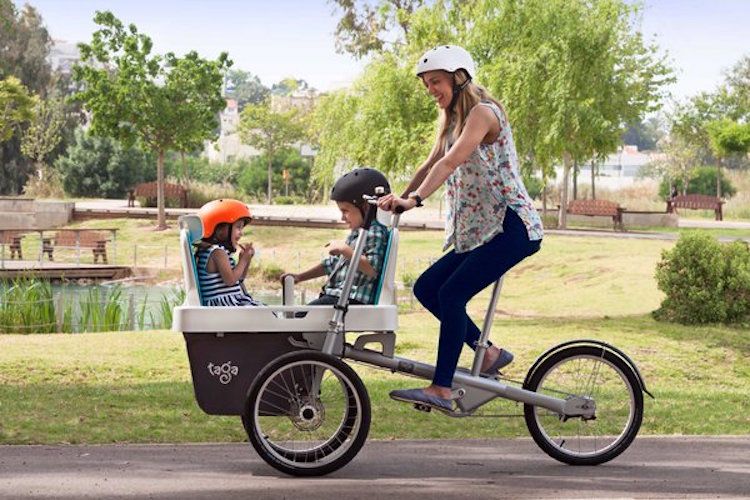 Taga Bike is the Dutch company behind the award-winning Taga 1.0, which is known as the world’s first bike that can turn into a stroller and is sold in more than 40 countries—Hollywood actor Matthew McConaughey and his kid look like fans.

Matthew McConaughey and his kid are clearly fans of the Taga 1.0.

In 2014, the developers started working on the 2.0, and seriously took things to the next level. Their latest ride is an endlessly customizable pedaling machine. The standard version is just the bicycle and child seat but you can purchase add-ons such as a canopy to protect the little ones from inclement weather, a kit that turns it into an electric bike for when you’re tired of pedaling, and even a water gun and other toys to clip onto the Taga 2.0’s “accessories bar” to make the ride more enjoyable for kids. The seats, which come in a variety of colors, are cushioned and reclinable to make it comfortable for babies and infants. Lastly, the bike can be folded up to fit neatly into your closet or car trunk.

“Taga 2.0 is a bike specifically designed to address the needs of the modern family,” according to the Kickstarter campaign. “We started from scratch. For three years we turned every stone to make the most comfortable, safe, easy to ride, practical and just all around coolest family bike ever.”

The company says that the Taga 2.0 is ideal for biking with children because with standard cargo bikes, the cargo area is mounted in the back, which can be unstable for young ones. A third wheel also makes it more sturdy than a two-wheeler.

“It is much safer to ride a tricycle than riding a regular bike, especially with kids,” CEO Hagai Barak told Fast Company, adding that family biking has grown in the U.S. thanks to an increasing number of bike lanes that make it safer to bike in more cities.

Cargo bikes can also be expensive, which is why the company designed their latest bike with affordability in mind.

“While widely loved, we knew the Taga 1.0 and other cargo/family bikes were not affordable for everybody, so we worked hard to reduce the cost, without compromising the quality or the features,” the developers said.

“Cargo bikes come in all shapes and sizes, but here at Taga we are looking to shift the focus from cargo to family,” Barak said in a press release. “Taga 2.0 will be the next step not just for recreational bike riding, but for family transportation as a whole.”

Seems like a lot of families are sold by the novel idea. The Kickstarter campaign has raised more than $1 million on the first day, easily blowing past its original goal of $100,000 and it still has more than 55 days of crowdfunding to go.

Learn more about the project in the video below.