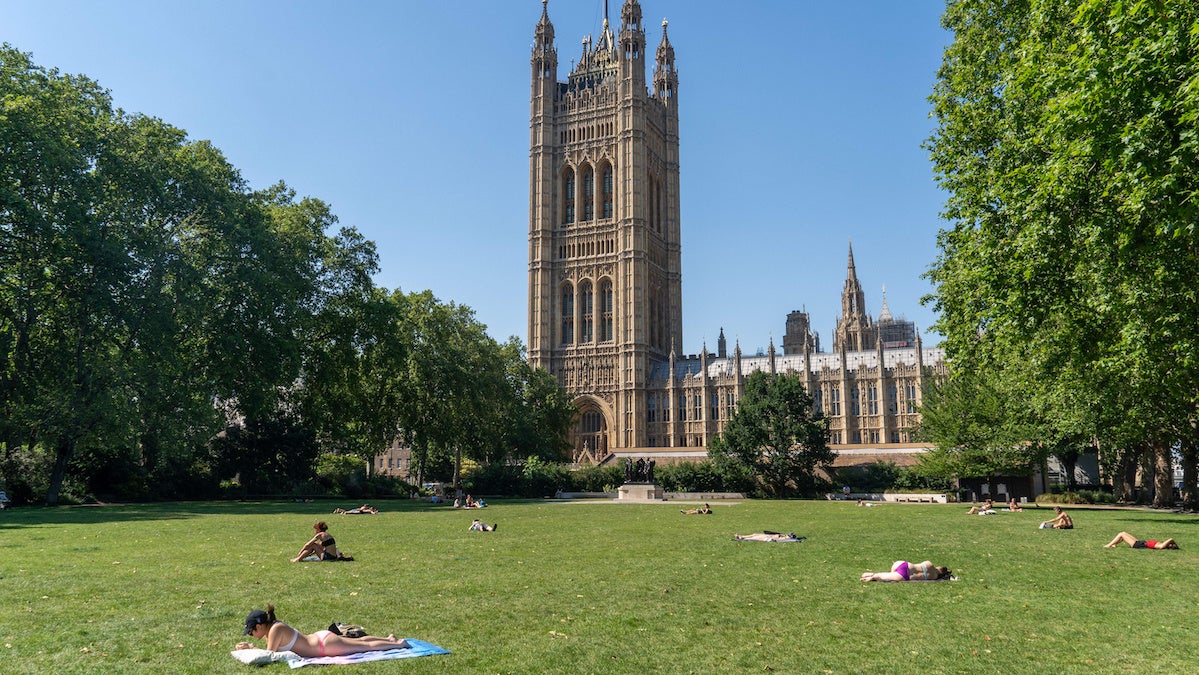 People relax in Victoria Gardens with the Houses of Parliament in the background in central London, as a heatwave hit the continent with temperatures touching 40 degrees Celsius on June 25, 2020. NIKLAS HALLE'N / AFP via Getty Images

The chance that UK summer days could hit the 40 degree Celsius mark on the thermometer is on the rise, a new study from the country’s Met Office Hadley Centre has found.

British summers currently only reach 40 degrees every 100 to 300 years. But the study, published in Nature Communications Tuesday, found that such temperatures could occur every 3.5 years if nothing is done to reduce greenhouse gas emissions and curb the climate crisis.

“Climate change has already influenced the likelihood of temperature extremes in the UK. The chances of seeing 40°C days in the UK could be as much as 10 times more likely in the current climate than under a natural climate unaffected by human influence,” lead author Dr. Nikolaos Christidis said in a Met Office press release. “The likelihood of exceeding 40°C anywhere in the UK in a given year has also been rapidly increasing, and, without curbing of greenhouse gas emissions, such extremes could be taking place every few years in the climate of 2100.”

To reach their conclusions, the researchers combined temperature measurements across the country with 16 different climate models, The Guardian explained. They found that reducing emissions made a big difference in lowering future temperatures. Under a medium-emissions scenario, in which emissions are reduced but not enough to honor the Paris agreement goal of limiting global warming to below two degrees, 40 degree days would occur every 15 years.

“This research shows human-caused climate change has set us on a course to see temperature extremes in the UK that would be highly unlikely under a ‘natural’ climate, although urgent action to reduce emissions now can significantly reduce the occurrence of extreme high temperatures in the UK in the future,” coauthor and head of the Met Office National Climate Information Centre Dr. Mark McCarthy said in the press release.

The study also looked at the likelihood of other temperature extremes. Days 35 degrees or higher currently occur every five years on average but could happen nearly every other year by 2100 under a high-emissions scenario. The 40 and 35 degree days would be most common in the Southeast, but the North could see 30 degree days once per decade by 2100. They are now extremely rare in that region.

UK summers are already feeling the impacts of the climate crisis. The summer of 2018 was the joint hottest on record, and the country saw its highest recorded temperature of 38.7 in Cambridge during July 2019, The Guardian reported. The climate crisis has made heat waves in the country 30 more likely, and temperature extremes caused 3,400 early deaths between 2016 and 2019. These impacts will only worsen as temperatures rise, which is a big reason why the Met Office conducted the study, Christidis told AFP. He said he wanted to help the country plan better for extremes.

“Exceeding extreme temperature thresholds like the 40C in the UK would be accompanied by severe impacts — on public health, transport infrastructure,” he told AFP.

However, on a global scale, the UK won’t be feeling the heat as intensely as other places.

“Heatwaves are a real risk to life in the UK, especially if we do not begin modifying our homes, workplaces and hospitals to manage their expected overheating,” University of Leeds professor Piers Forster, who was not involved in the study, told The Guardian. “However, we should note that in terms of heatwaves, the UK will get off lightly compared with most other nations. Heatwaves in the major crop-growing regions of the world could have more profound effects, both globally and for the UK.”