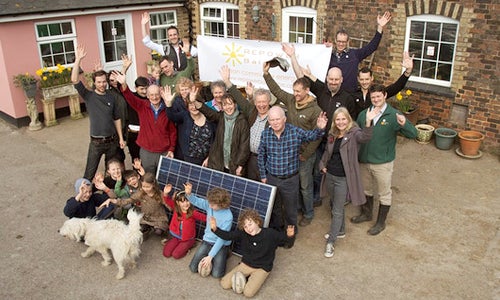 Once a sleepy village in West Sussex, last summer Balcombe became synonymous with the UK’s fight against fracking as the residents found themselves host to riot police, protesters and TV crews.

Now the residents of Balcombe are going a step further, with the aim of putting the village on the map for all the right reasons as they quit fossil fuels for solar energy. 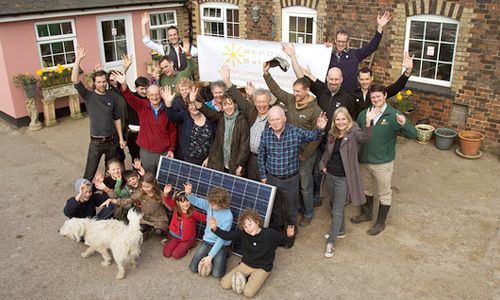 Once at the centre of the UK’s wave of new oil and gas drilling, the residents are now turning away from dirty energy as they form their own renewable power co-operative, REPOWERBalcombe.

The goal: produce enough clean, homegrown electricity to match the needs of every home in the village.

“We all need energy, but buying dirty fossil power from giant utilities is no longer the only option,” said Joe Nixon from REPOWERBalcombe. “Advances in renewable technology mean that communities like ours can now generate the energy we need ourselves, locally, in a way that benefits us directly instead of big power companies, and helps the environment instead of harming it.”

This is win-win for Balcombe and for the planet.

For the first phase of the project, the group aims to install around £300,000 worth of solar panels on the rooftops of local buildings this spring with the aim of producing 7.5 percent of the village’s needs.

Celebrating the launch of the project, the group signed a lease to host 19kW of solar panels on the roof of a cow-shed at nearby family-run Grange Farm. In exchange for hosting the panels, the farm will receive 33 percent discounted electricity for the next 25 years.

Talks are also underway for another five sites in and around Balcombe.

Each project is expected to deliver at least five percent return to investors during the 20-year lifetime of the scheme, while any profits will be ploughed into a community benefit fund.

The project has been welcomed by environmental groups, who are keen to support this infamous village take back control over their energy supply.

“People don’t need to accept risky fracking on their doorsteps,” Brenda Pollack, campaigner at Friends of the Earth. “It’s great to see community energy initiatives like this that enable local residents to produce their own clean and safe power, and earn themselves an income too.”

10:10 are also helping to support this “bold” and “brilliant” plan, launching a national project supporting people to “Back Balcombe.”

“People don’t want fracking, but they are being told there is no alternative if we want to keep the lights on and have secure power supplies,” Leo Murray, community energy campaigner at 10:10. “Well there is—Balcombe is sending a clear message that whereas fracking has to be forced on communities, they chose clean renewable power.”

The project aims to give a megaphone for their plans and providing people across the UK with a chance to invest in them, and help them meet their ambitious plan of being powered fossil free.