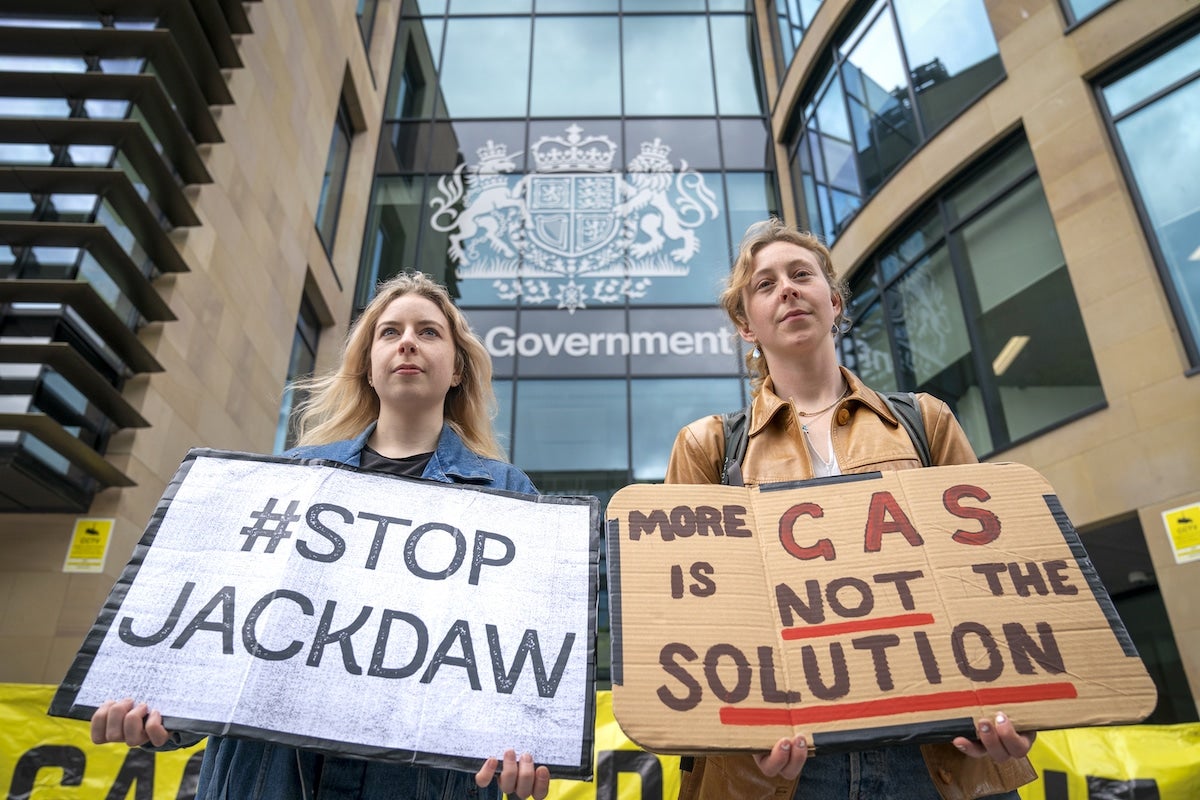 Environmental campaigners from Friends of the Earth protest outside the UK Government building in Edinburgh on June 2, 2022. Jane Barlow / PA Images via Getty Images

Amidst concerns about high energy prices following Russia’s invasion of Ukraine, the UK government has approved a North Sea gas field that it had previously rejected in October over concerns that it would contribute to the climate crisis.

The Jackdaw gas field is located to the east of Aberdeen in Scotland and has the potential to supply 6.5 percent of the UK’s gas output, BBC News reported. It will be developed by oil giant Shell, which said that it would eventually power 1.4 million homes. However, green groups have pledged to fight the project.

“This government has no idea how to solve the energy crisis,” an activist from the new group Stop Jackdaw named Lauren MacDonald said, as The Guardian reported. “It’s still looking to oil and gas for the answer when that is precisely what is driving the cost of living and climate crises.”

The group called for emergency protests on Thursday outside the Department of Business, Energy and Industrial Strategy in London and Queen Elizabeth House in Edinburgh on their website. They also said more actions would be planned in the future.

Greenpeace, meanwhile, said the approval might be illegal and is considering suing to stop it.

“Approving Jackdaw is a desperate and destructive decision from Johnson’s government, and proves there’s no long-term plan,” Greenpeace UK political campaigner Ami McCarthy said in a statement. “They could immediately shave billions off bills, get a grip on UK energy demand, create thousands of jobs, boost our economy, tackle the climate crisis and avoid future crises – if they just upgrade homes to be warmer and greener, and invest in clean and cheap renewable power. But instead, once again, they’re handing out lucrative permits to the likes of Shell for a project that won’t start producing gas for years, that won’t lower our bills, but will create massive emissions causing deadly flooding and wildfires, and mass migration from people fleeing the climate crisis.”

Shell, meanwhile, was pleased with the decision, arguing that it came “at a time when UK energy security is critically required,” as The Herald reported. After its proposal to develop the field was rejected in October, the company had submitted a revised proposal in March to the Offshore Petroleum Regulator for Environment and Decommissioning. It said that it would cost about £500 million to develop the field and that production would start in the second half of 2025. Further, the company said that some of the carbon dioxide released from the field would be captured and stored if a project in Peterhead receives the necessary financing.

In justifying the approval, UK Business Minister Kwasi Kwarteng said it was important for the country’s energy security.

“We’re turbocharging renewables and nuclear, but we are also realistic about our energy needs now,” he tweeted. “Let’s source more of the gas we need from British waters to protect energy security.”

However, the International Energy Agency warned in 2021 that all new oil and gas development needed to stop in order to limit global warming to 1.5 degrees Celsius above pre-industrial levels. Another study released last month went further, saying that nearly 40 percent of developed fossil fuel reserves would need to be abandoned to meet the goal.

“The UK Government must reverse this approval, stop issuing any new fossil fuel licences and start planning for a managed phase-out of production, with a just transition for workers and communities,” said Mary Church, head of campaigns at Friends of the Earth Scotland, as The Herald reported. “It must also do much more to alleviate the suffering of households as the energy price crisis bites, and urgently ramp up retrofits to keep homes warm while helping end reliance on expensive gas.”