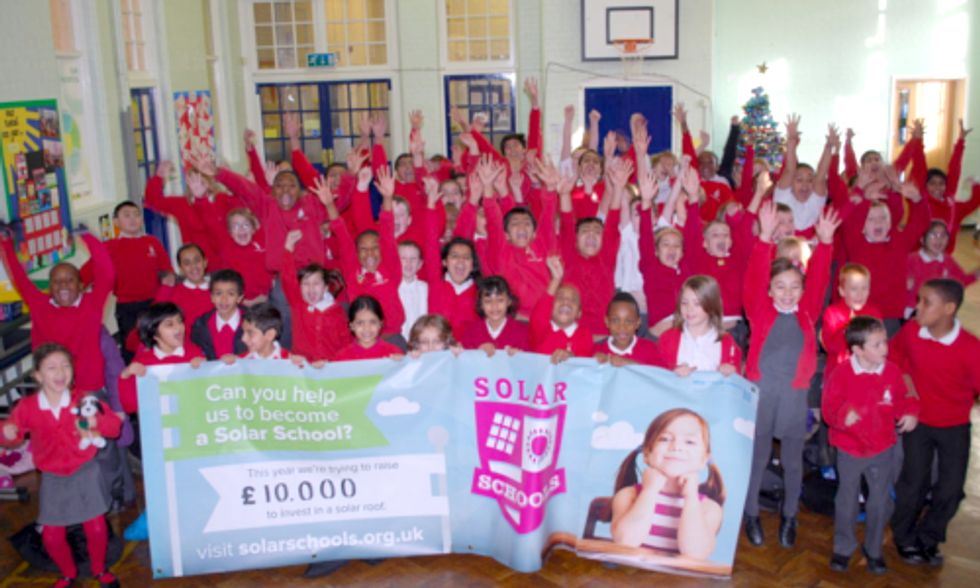 Schools across the United Kingdom want to go solar, and they'd rather not wait.

In order to make renewable energy a reality by the 2014-15 school year, 10:10 Solar Schools and Good Energy are helping 20 schools create their own crowdfunding campaigns. That includes providing training and necessary supplies, like their own small website.

The crowdfunding concept has already worked for about 50 schools across the UK that have raised the British equivalent of $594,685 to go solar. Now, schools have until next month to apply for one of 20 open slots.

“The response to Solar Schools has been phenomenal," wrote a representative from EP Collier, one of the schools that piloted the project in the 2010-2011 school year. "It has brought local businesses, our children and families and our local community together.”

EP Collier was one of the pilot schools for the Solar Schools crowdfunding concept. Photo credit: 10:10 Solar Schools

From dinners to bike rides, the schools have developed their own activities to garner the needed support. Millbrook Primary C.E.V.A. School invited its community to a 100-mile bike ride to help achieve 110-percent funding for its 4 kilowatts of solar energy.

Aside from raising the money needed, the initiative also gives children direct exposure to a clean form of energy they will hopefully be deploying for years to come.

“By taking part, children can discover for themselves not only how harnessing the power of the sun can turn into lighting and power for computers in their classrooms, but also how to get support from their local community through crowdfunding.”

Schools can apply here, while potential donors can use an interactive map to find schools that have yet to meet their goal.

College Students From Around The World Embark on 2015 Solar Decathlon