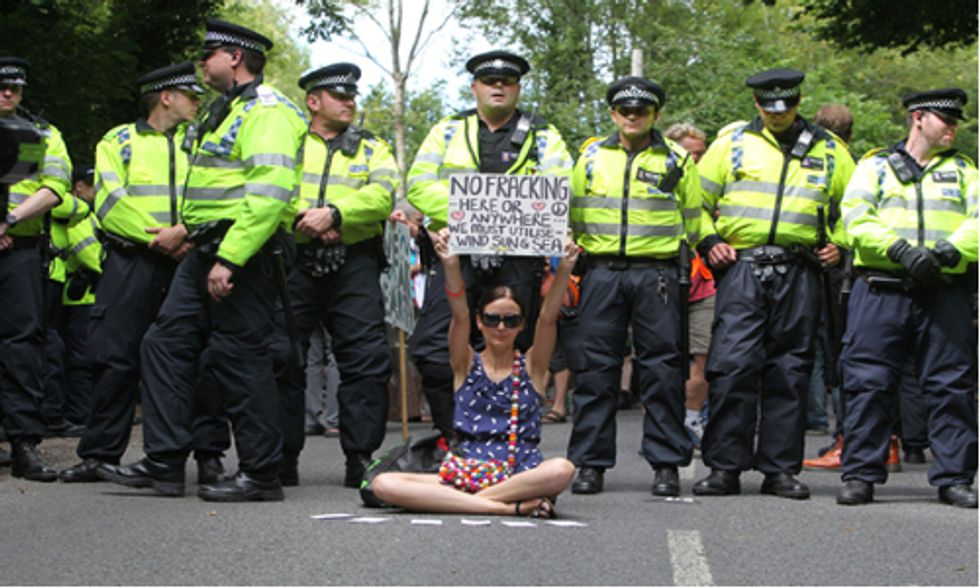 Following a nearly three-month public comment period in which more than 90 percent of the comments were opposed, the UK government announced it will go ahead with a plan to allow fracking beneath homes without the owners' permission. Current rules allow homeowners to block shale gas projects. The government says the legal process to force them to allow them so is too time-consuming and expensive.

Despite widespread opposition, the UK government has moved ahead with its plans to remove obstacles to fracking.
Photo credit: Shutterstock

"The majority of respondents included campaign text opposing hydraulic fracturing and/or the proposed change to underground access legislation and did not specifically address the questions to the consultation," the government website said. "We acknowledge the large number of responses against the proposal and the fact that the proposal has provided an opportunity for the public to voice their concerns and raise issues. However the role of the consultation was to seek arguments and evidence to consider in developing the proposed policy. Whilst a wide range of arguments were raised and points covered, we did not identify any issues that persuaded us to change the basic form of the proposals."

A statement from the government yesterday titled "Government to remove barriers to onshore oil and gas and deep geothermal exploration" touted the country's investment in renewables before saying, "We know that our journey towards a low carbon future will take time and that emerging energy industries often need government support to get going. That’s why, alongside a further £40 billion of renewable investment running into 2020, we are exploring for shale gas. As the cleanest fossil fuel, gas provides a bridge to much greener future, and geothermal energy can supply renewable heat to our homes and businesses."

“Exploring the natural energy resources beneath our feet, within a robust regulatory framework, is important for our national energy security and helps create jobs," said Business and Energy Minister Matt Hancock." These new rules will help Britain to explore the great potential of our national shale gas and geothermal resources, as we work towards a greener future—and open up thousands of new jobs in doing so.”

The Guardian reported, "New laws will now be passed giving automatic access for gas and oil development below 300m and a notification and compensation scheme will be run by the industry on a voluntary basis."

Industry trade group UK Onshore Oil & Gas hailed the decision, saying, "This amendment will help pave the way for the UK to develop natural gas from shale for the benefit of households and businesses across the country. The current system involves significant potential delays and costs without benefit either to the oil and gas industry or the landowner" and promising "“The onshore oil and gas industry is committed to working with local communities and operates within a regulatory system considered one of the best in the world. We have also brought forward proposals to share the benefits of shale gas exploration with local communities.”

“With 99 percent of the respondents opposing the government’s plans to allow fracking under people’s homes without their permission, it is clear that this was a sham consultation," said Jane Thomas, senior campaigner at Friends of the Earth, one of the groups organizing the opposition campaign. “This government seems hellbent on fracking irrespective of widespread opposition. You’d think with a general election approaching politicians would listen to public opinion and get behind the popular energy solutions of cutting waste and backing renewables."

"UK government proposals to remove the right of Scottish householders to object to drilling under their homes, without so much as debate in the Scottish Parliament, flies in the face of Scotland's cautious, considered and evidence based approach on this issue. It is also fundamentally an issue affecting land ownership rights," he said.

In January, the UK government eliminated a requirement that energy companies inform individual homeowners of future fracking operations under their homes, also in the face overwhelming public opposition.