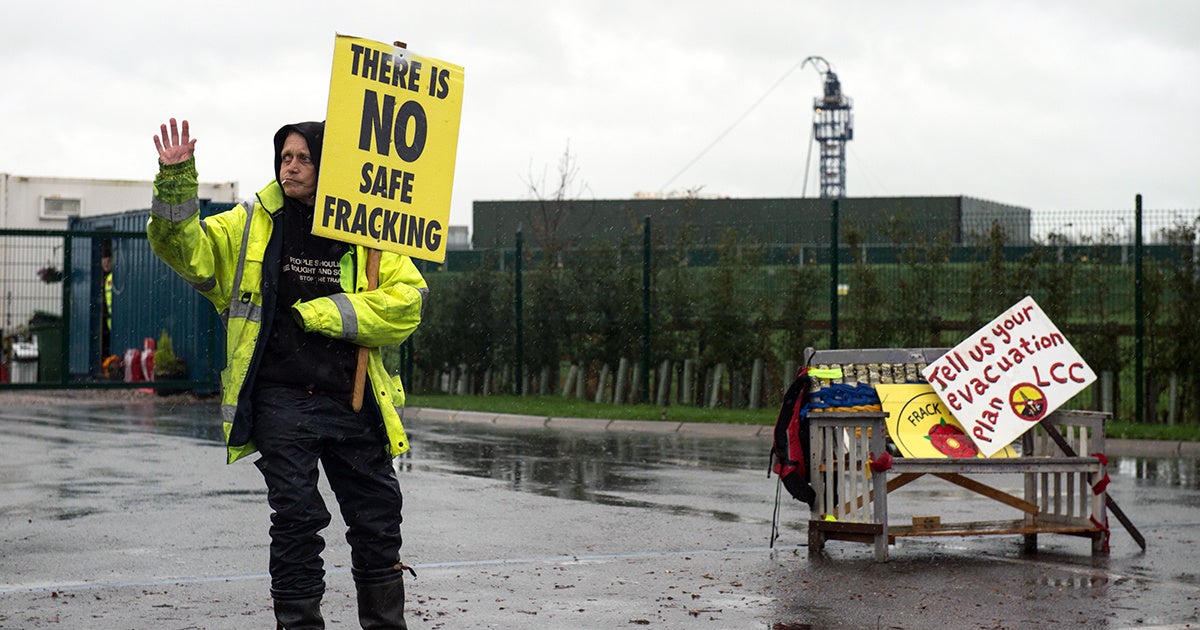 It would appear that the resurgence of fracking in the UK is on very shaky ground. A company called Cuadrilla restarted the controversial technique at a site in Lancashire, in Northwest England, just two months ago after a seven year hiatus. But it spent a month of that time doing tests with smaller volumes of water after a series of small earthquakes in October, The Guardian reported.

When it restarted full operations Monday, it didn’t have to wait long before triggering the area’s biggest earthquake yet. A 1.5 magnitude tremor was recorded at around 11:20 a.m. on Tuesday, an order of magnitude strong enough that five people told the British Geological Survey that they had felt the quake.

“Within a day of Cuadrilla restarting fracking in Lancashire, there has already been another earthquake which means they’ve had to down tools, ” Friends of the Earth campaigner Tony Bosworth told The Guardian.

According to the “traffic light system” put in place by the Oil and Gas Authority, Cuadrilla must pause operations for 18 hours after any red level earthquake measuring 0.5 or above.

“Cuadrilla will pause and continue to monitor micro seismicity for at least the next 18 hours, in line with the traffic light system regulations. Well integrity has been checked and verified,” a company spokesperson told The Lancashire Evening Post.

The spokesperson referenced a University of Liverpool study that said the impact of the quake “would be like dropping a melon,” but Cath Middleton, who lives 1.6 miles from the fracking site and felt the quake, cast doubt on that comparison. She told BBC News that she heard a “very loud bang.”

“To compare this to dropping a melon is ridiculous,” she said. “My neighbour’s chair shook.”

Apparently, when a concerned resident 1.5 miles away felt the earthquake & heard a bang, she called Cuadrilla only to be told:

“It’s the equivalent impact of dropping a melon. Don’t worry.”

Your #fracking arrogance is breathtaking, @CuadrillaUK

The 1.5 magnitude quake was also the last of nine recorded in a 90 minute time span Tuesday, the most recorded on the site within a single day, The Lancashire Evening Post reported.

“It appears that they cannot frack without triggering tremors. And instead of acknowledging that fracking needs to end, Cuadrilla are instead urging for regulations around earthquakes to be relaxed,” Bosworth further told The Lancashire Evening Post. “We’ve always said that fracking poses risks for our climate and environment. After today’s quake, and with the effects of climate breakdown already happening around us, isn’t it time to put a stop to fracking once and for all?”

Fracking was originally stopped in the area in 2011 after two quakes, one registering 2.3 and one registering 1.5, were felt by people outside the nearby city of Blackpool, The Guardian reported. Since operations restarted this October, a total of 47 minor earthquakes have been recorded.