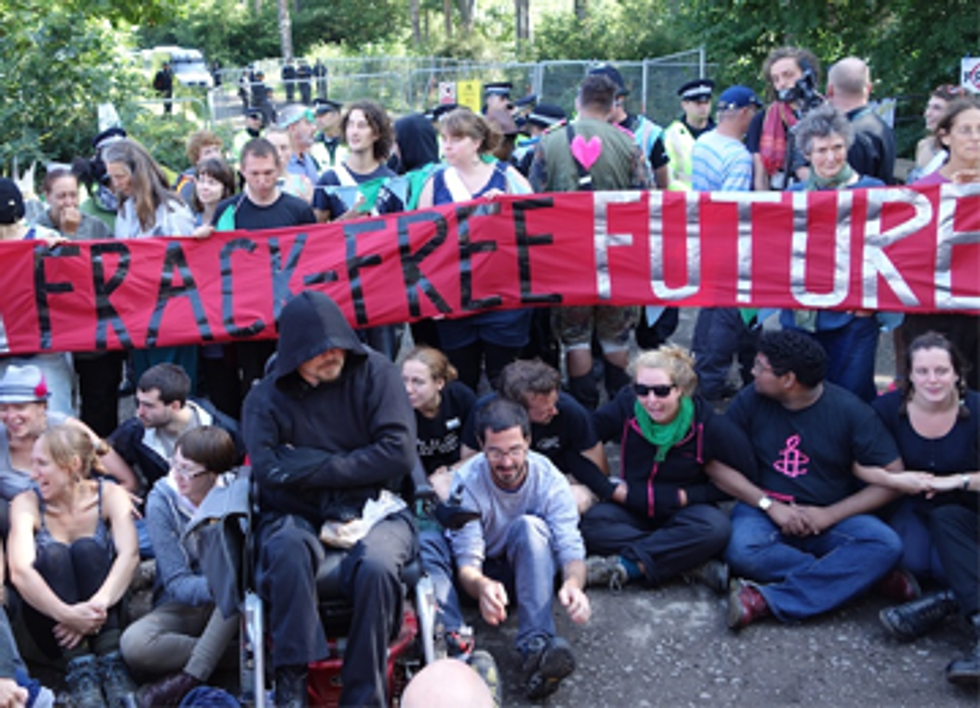 No Dash For Gas

Today, anti-fracking protestors from Reclaim the Power have targeted Cuadrilla at locations across the United Kingdom, shutting down their headquarters in Lichfield, their PR company in London and the Balcombe drill site. Campaigners condemned violent policing at the gates of the drill site, where police charged, shoved and kettled a group that included children, people in wheelchairs, pensioners, journalists and Member of Parliament (MP) Caroline Lucas.

“This an outrageously aggressive response to a day of principled civil disobedience," said protestor Ewa Jasiewicz, who was at the kettle. "All of our actions have safety, dignity and respect at their core. Cuadrilla and the government were desperate to discredit fracking opponents. We offered them no aggression, so they are creating it themselves.”

Actions began at 8 a.m., when the central London headquarters of Bell Pottinger, the PR company behind Cuadrilla’s controversial fracking operation in Sussex, were blocked by six activists using superglue and reinforced arm tubes. Another activist climbed the building and unfurled a banner reading: BELL POTTINGER—FRACKING LIARS. The campaigners used a sound system to play an undercover recording in which a Bell Pottinger spin doctor admits the company’s pro-fracking PR offensive "sounds like utter f###ing bulls###."

"Bell Pottinger has been responsible for a sustained campaign of corporate misinformation, but they were caught out by a secret recording that shows they don’t even believe their own spin," said Kerry Fenton of Richmond, who superglued herself to the Bell Pottinger headquarters. "This morning we’re stopping their staff from reaching their desks in the hope that for one day at least Bell Pottinger won’t be able to mislead the British public about fracking. In truth it’s polluting, expensive and dangerous."

By 9 a.m., 20 protestors had shut down Cuadrilla’s headquarters in Lichfield blockading it with their bodies. Three people got inside and held a floor of the building by using U-locks to occupy eight work stations. The entire floor was cleared of staff.

"Cuadrilla have imposed their dirty energy on the community of Balcombe, and so we have brought our camp from Balcombe to their headquarters," said Debby Petersen, who is taking part in the action. "We need to reclaim our energy system from the hands of corporations that will frack our countryside, crash our climate targets and send fuel bills through the roof."

Twenty minutes later, activists placed a wind turbine blade on the roof of the constituency office of Balcombe MP and Cabinet member Francis Maude. Maude was targeted for his pro-fracking views. He appointed Cuadrilla chairman John Browne as an unelected member of the cabinet office in 2010.

At 10:25 a.m., five activists, three of whom are disabled, blocked the main gate to Cuadrilla’s drill site at Balcombe using U-locks, superglue and a wheelchair. They were surrounded by another blockading line, and a larger group of activists blocked the surrounding road. The action was organized by Disabled People Against the Cuts.

Meanwhile, a double-decker bus with children from the camp toured the area with the slogan “Don’t Frack with Our Future” emblazoned on the side of the vehicle.

The campaigners encouraged supporters to flood Cuadrilla’s inquiries phone line with calls “letting them know that if they try and frack in our towns we’ll stand up to them.” This is just one day of action taken as part of the growing UK anti-fracking movement.

“We are standing with the community rejecting the government’s energy policy which is devastating many different communities in many different ways," said Andy Greene from Disabled People Against the Cuts. "This policy is driving many poor and disabled people into fuel poverty. It punishes them for the mistakes of others and gives the energy companies a free hand on the tiller of public money.”

At the march for a Frack Free Future, an estimated two thousand people marched to the drill site in Balcombe.

“Because we have here a travesty of democracy and we’ve tried every democratic path to use, the only choice we have left is direct action," said Balcombe resident Douglas Wragg, earlier in the week. "I’ve been living here for 20 years and I would never have imagined myself being involved in protest. But you either lie down and let Cuadrilla ride roughshod over you, or take direct action.”