Subscribe
The Rising
EcoWatch is a community of experts publishing quality, science-based content on environmental issues, causes, and solutions for a healthier planet and life.
Mentioned by: 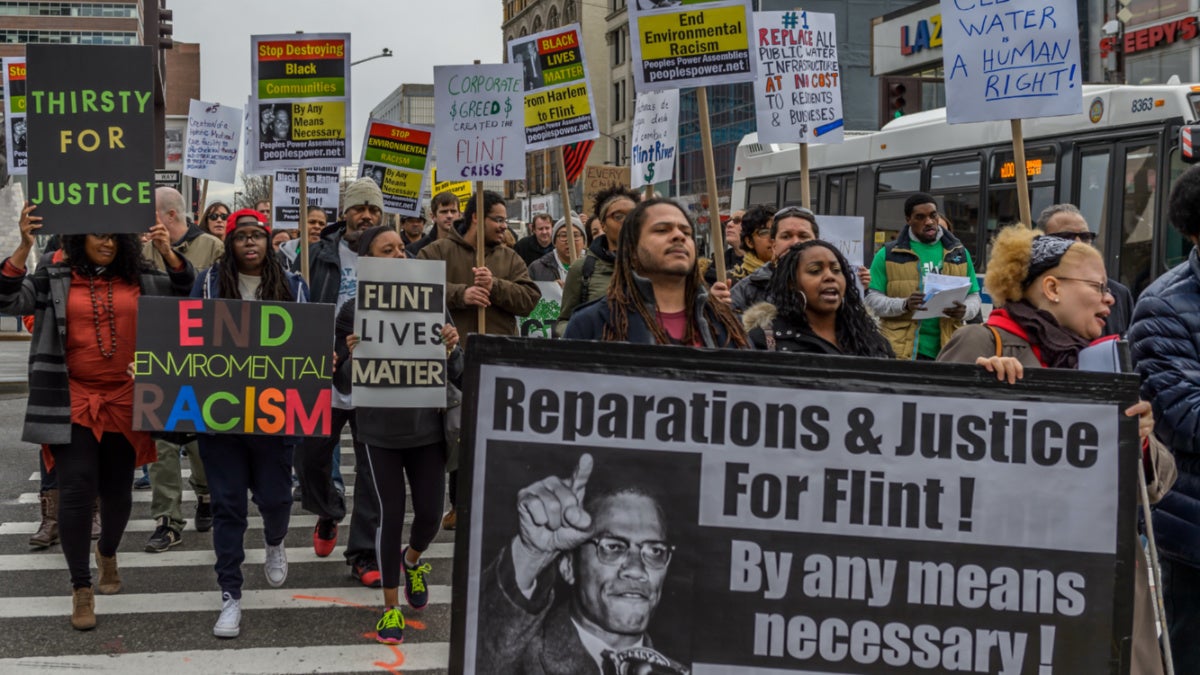 A coalition of NYC Black Lives Matter activists and environmental justice groups march on the 51st anniversary of the assassination of Malcolm X to demand justice for the people of Flint, Michigan in NYC on Feb. 21, 2016. Erik McGregor / Pacific Press / LightRocket / Getty Images

We constantly hear the narrative that climate change impacts us all. And while that's true, the issue is disproportionately impacting people of color, especially Black, Latino, and Native Americans. And when it comes to environmental justice, we just aren't talking about social equity enough.

A decade ago, Grist reporter Alan Durning wrote on the topic of climate change and race, "It's 2010. Some things have changed; others have not. Racial discrimination has diminished but persists, often in hidden and even subconscious ways."

Even now, seemingly hidden barriers continue to burden marginalized communities with the effects of climate change.

Flint Serves as One of the Most Popular Instances of Denied Environmental Justice.

Perhaps your first time being exposed to environmental racism was when you learned about Flint, Michigan. In fact, University of Michigan researcher Paul Mohai called it "the most egregious example of environmental injustice in recent U.S. history."

When residents complained about contaminated water supply, state officials quickly and publicly dismissed citizens' claims. Residents almost immediately noticed a change in their water supply back in April 2014. Flint is a city of nearly 100,000 people. But, the state waited over a year to address the issue, finally doing so in October 2015…a full eighteen months.

Let's look at some numbers. Black Americans made up only 14% of Michigan. However, the most heavily polluted zip code in Michigan is 84% Black. For Flint and their Republican-controlled state government, NYT report John Eligon said it meant the city had "little political power."

A state report by the Michigan Civil Rights Commission verified that racism was a contributing factor in the water crisis. Government inaction led to a major Legionnaire's outbreak from the poisoned water. This disease is a severe form of bacterial pneumonia. Michigan reported at least 90 citizens were sickened and 12 died. However, a PBS FRONTLINE investigation found that 115 people actually died in Flint.

In January, over 30,000 Flint residents have filed lawsuits against city and state regulators for reparations. But, NPR says it's "unclear" if anyone will ever face trial for this injustice.

So, it's no surprise that people often refer to Flint when it comes to environmental racism.

Overwhelmingly, Latino and Black Americans live closer to toxic waste facilities, coal plants, or other areas not compliant with federal air pollution regulations. These instances, in turn, are associated with significant respiratory problems among these marginalized groups.

An analysis in California from the Union of Concerned Scientists affirmed this idea. In the study, they found that U.S., Black, Latino, Asian, and low-income communities suffered the most from poor air quality — and impacted Black Americans the most.

They experience 43% more exposure to PM2.5 pollution than White Californians. (Fine particulates from PM2.5 pollution are smaller in width than human air and form from diesel exhaust, smokestacks, construction projects, etc. Exposure to PM2.5 pollution is actually the 6th leading cause of death in the world.) And you'd think that more would be done to fix this as a respiratory virus, COVID-19 ravaged the world. Instead, the EPA stopped enforcing air pollution rules during the virus. This, among other reasons, explains why people of color are at higher risk of contracting COVID-19.

Tragically, those hit hardest by pollution contribute the least. The same study found that California households without a personal vehicle were actually exposed to higher levels of air pollution. This is because these households are usually in urban areas, which are typically surrounded by heavy traffic.

Those living in low-income households already are at increased risk of a lower life expectancy. They're also more likely to contract chronic conditions like heart disease and diabetes. So, for poor communities, living near polluting facilities only makes them more vulnerable to dangerous health effects.

Low-Income Households, People of Color Are Left in the Dark.

The transition to renewable energy revealed a lack of equity for the poor and people of color. (Minority groups often overrepresent impoverished neighborhoods. A study by the U.S. Department of Health and Human Services found that 40% of Americans living in poverty are black. Take in mind, Black Americans make up less than 20% of the U.S. population).

840 million people in the world still suffering from energy poverty. Overwhelmingly in the U.S., those struggling to pay for rising energy costs tend to be low-income Black and Latino Americans.

Given that many underserved communities don't even have reliable power, it makes sense that they're also less likely to have access to clean or energy-efficient technologies.

Additionally, in New Orleans, Grist reported that 20% of residents' income went to their energy bills. It's no wonder that the city, which has one of the nation's highest poverty rates, is also one of the least energy-efficient in the U.S.

And unfortunately, extreme rising temperatures due to climate change will only continue threatening power grids. This will result in heightened cases of blackouts. California's series of wildfires last year also hurt low-income households the most.

Last year, the California Department of Social Services reported that almost 51,000 households relying on food assistance lived in areas heavily impacted by planned outages to mitigate wildfires. For some, blackouts can definitely be an inconvenience. But, they can be devastating — and even deadly — to the poor and elderly.

Natural disasters caused over billion in damages in 2019. While disasters don't discriminate which areas they affect, recovery is much harder for the poor.

In times of despair, people tend to rally together. However, there's not an even dispersion of aid and attention. The Atlantic pointed out that private and public aid often "accrue to the haves more so than the have nots."

Brad Kieserman, VP of Disaster Logistics and Operations at the American Red Cross, discussed this after the Camp Fire wildfire.

"Disasters, for most communities, exacerbate already existing issues, which is why we often see in shelters what we sometimes refer to as the least, the last, and the lost'," he told the Atlantic. "The people who had the least, who were the last to get services, who were already at the end, who were lost beforehand, especially financially."

Environmental Justice a Big Challenge for the Native American Community.

According to The Conversation, 90 years of data show poverty rates climbing by 1% after natural disasters, impacting the poor most. For them, resiliency after devastations might not be possible.

"Our research suggests that the rich may have the resources to move away from areas facing natural disasters, leaving behind a population that is disproportionately poor," it wrote.

Then, when applying for recovery aid, Native Americans struggle most. Extreme heat and droughts harm plants and wildlife. They also create higher risks of wildfires and habitat loss. Since Native Americans depend heavily on natural resources, plants, and animals, it makes them vulnerable to climate change.

"It's basically like you're [Congress] setting us up to fail," he said.

The Importance of Your Vote in Achieving Environmental Justice.

After the Green New Deal was introduced back in 2019, AOC's sweeping proposal helped put climate policy on the map. One reason this outline got so much traction was that it heavily confronted social issues. This emphasis on social justice proved its important role in the climate narrative.

Although the Green New Deal did receive significant backlash over its feasibility, it did reinforce the idea that social justice and climate cannot exist as separate battles. In order for us to make significant progress in the fight against climate change, everyone must reap the benefits of a cleaner world.

The environment is the third most important issue in swing states. However, just focusing on the environment is not enough. When creating these solutions, poor, vulnerable communities must also be taken into consideration. We must demand environmental justice to enact real change.

This story originally appeared in The Rising, and is republished here as part of Covering Climate Now, a global journalism collaboration strengthening coverage of the climate story.