Subscribe
Freshet Collective
EcoWatch is a community of experts publishing quality, science-based content on environmental issues, causes, and solutions for a healthier planet and life.
Mentioned by: 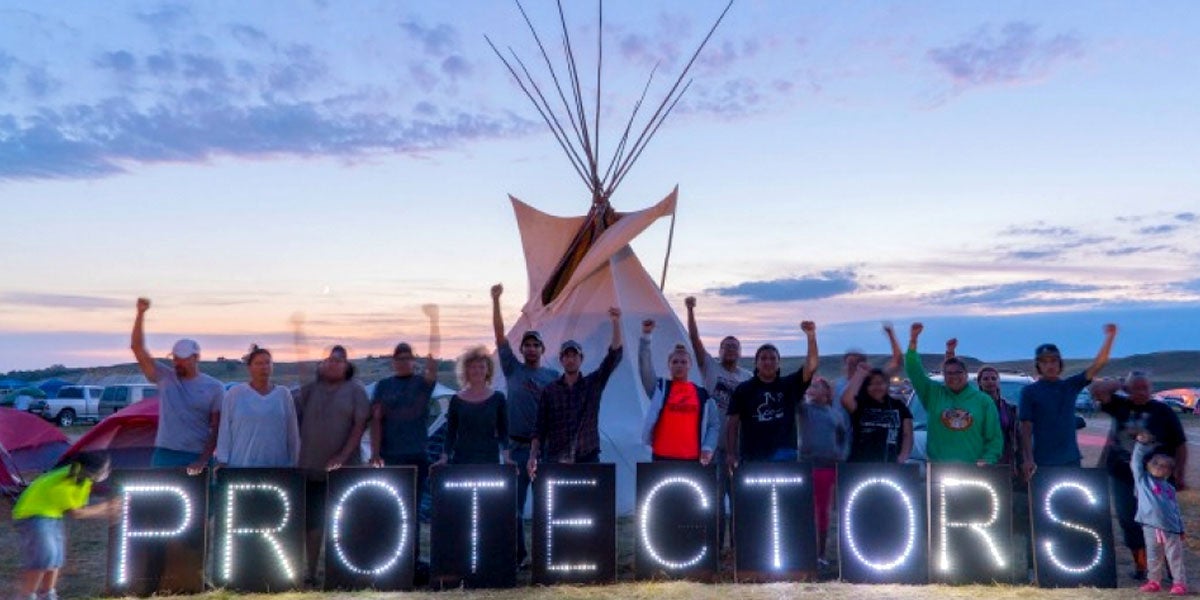 On Jan. 27, attorneys representing the first 10 water protectors arrested in actions against the Dakota Access Pipeline in early August 2016 renewed their motion for a change of venue, on grounds that the state did not adequately respond to the motion and is not taking basic steps to assess bias among jurors.

The requested change of venue would move the trials to a different county, outside the reach of negative media coverage and hostile community perception. The motion was filed on Jan. 19 and denied by North Dakota District Judge Cynthia Feland on Jan. 24, who claimed that “a fair and impartial jury has already been impaneled and seated” and that “it would be nonsensical for the court to say it cannot be done.”

“It appears that the state’s strategy is to simply delay discovery, charge people based on collective action and not individual acts which can be established by admissible evidence, and then hope for a conviction from a jury overwhelmingly biased towards law enforcement and the state.”

A randomized survey conducted by the National Jury Project concluded it is highly likely that the more than 600 water protectors facing criminal charges in the coming months will not receive fair trials from petit jurors impaneled in Morton and Burleigh Counties. The survey found that 77 percent of the juror-eligible population in Morton County and 85 percent of the juror-eligible population in Burleigh County had already decided the defendants were guilty.

A substantial number of of the surveyed population have connections to law enforcement, the oil industry, landowners and others who have been affected by the protests.

Many respondents made statements indicating that they perceive protesters as a threat to community safety and described the water protectors as “eco terrorists,” “criminals” and “idiots” who “hopefully all freeze to death.”

https://twitter.com/EcoWatch/status/822491211877535744 come to intentionally commit crimes for political purposes and have North Dakota taxpayers pick up the tab.”

The actions of county and city authorities have also contributed to an atmosphere of prejudice and fear in the general public. There have been “reverse 911” calls to warn residents to avoid certain areas Morton County deemed “unsafe” due to prayer circles and demonstrations. Elected officials called for economic boycotts and advised local businesses to deny service to those they suspect connected with the Standing Rock encampments. North Dakota GOP lawmakers also introduced bills to crack down on demonstrators by restricting the use of face masks and protecting drivers from liability if they injure or kill a pedestrian obstructing traffic on a public road or highway.

#NorthDakota Bill Would Protect Motorists Who 'Unintentionally Cause Injury or Death' to Protesters https://t.co/sL4LMxC2N6 @NRDC @350

Diane Wiley, president of the National Jury Project Midwest, said that “most juror-eligible residents … have prejudged or at a minimum are negatively predisposed against the protestor defendants” and that “it is next to impossible to expect that jurors holding these attitudes and predispositions, and living in such an atmosphere, can impartially weigh the evidence in the cases.” In Wiley’s 43 years of jury pool research, this is the only time she has found “100 percent recognition of the issues involved in a court case.”