Subscribe
Earth Guardians
EcoWatch is a community of experts publishing quality, science-based content on environmental issues, causes, and solutions for a healthier planet and life.
Mentioned by: 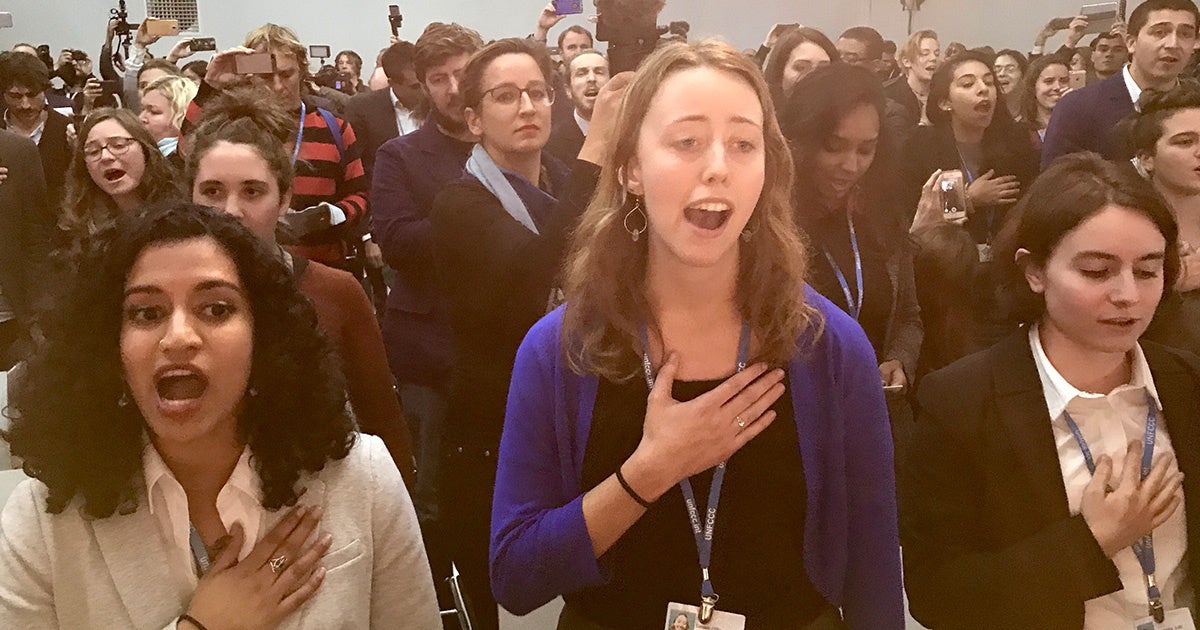 President Donald Trump's fossil fuel agenda was met with disdain Monday evening at COP23. The only official White House event was titled, "The Role of Cleaner and More Efficient Fossil Fuels and Nuclear Power in Climate Mitigation." Everyday people from across the world attended it, but they were not there in support of the event, but rather in protest.

President Donald Trump‘s fossil fuel agenda was met with disdain Monday evening at COP23. The only official White House event was titled, “The Role of Cleaner and More Efficient Fossil Fuels and Nuclear Power in Climate Mitigation.” Everyday people from across the world attended it, but they were not there in support of the event, but rather in protest.

As a young person from the United States and a youth delegate with SustainUS, I felt a personal responsibility to hold the United States government accountable for continuing to block progress on the Paris agreement via their ties to a small handful of fossil fuel billionaires. I could feel my palms sweating as I waited in the security line to the get into the event.

I was so nervous, but it helps to know that you’re not alone—seven out of ten Americans support urgent climate action and staying in the Paris agreement. Everyday Americans and people from across the globe were standing with me at that very moment. And young people have always been at the forefront of social change movements, pushing the boundaries of what our societies believe is possible. Doing so helps to create space beyond the status quo, which is necessary to advancing the needle in favor of progressive values. By disrupting the status quo, we help to define its boundaries, and by establishing the limits, we determine and set the terms of the debate.

So that’s what I set out to do on Monday evening: set the terms of the debate on fossil fuels at COP, disrupt the Trump administration’s lies, inspire people back home, and most importantly, stand on the right side of history. I know that I’ll remember Monday’s action for the rest of my life, and I hope it will forever be a defining point throughout history when the people declared “No More” to being bullied by corporate elites for profit.

We the people stood in our full dignity and power, filling the U.S.-backed event with at least a hundred voices. Midway through our song, I looked back at the administration’s baffled faces, as I quickly unfurled a banner that read “We the People” with the words “fossil fuel CEOs” crossed out at the top of it. And even when we were escorted out, we continued to sing a beautiful rendition of “God Bless the USA.” Walking out of the event doors into a 200+ crowd, I started to tear up.

I have always looked up to the social movement leaders of the past whose work carries into the present. Martin Luther King, Jr. and Gandhi are my heroes. On Monday night, I imagined all the social change makers of the past right by my side as cosmic companions. They’ve left a legacy, and this generation can follow in their footsteps. Never in my life have I ever considered myself to be a “hero,” and that’s because, in these dire times, we all have to step up to the plate in being the heroes in this tragic story that is the reality of climate change.

Local action has global implications. When I come back from these talks, I’m getting straight to work back home to ensure that my governor in Colorado, Governor Hickenlooper, does not succumb to the interests of the one percent by increasing hydraulic fracking. Together, we can build local movements that have the strength to create a people’s uprising outside of this panel event.