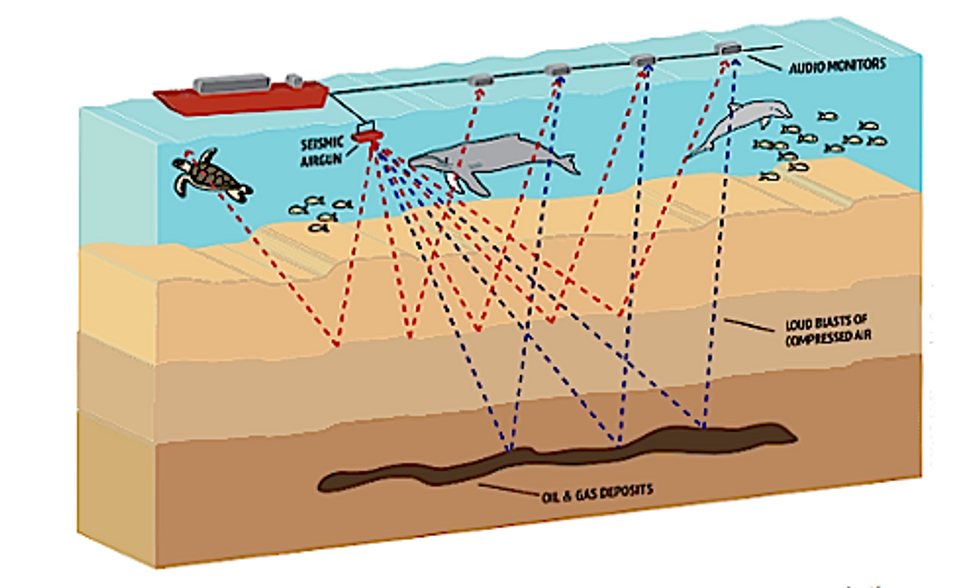 Yesterday, the U.S. government released a final proposal to allow the use of controversial seismic airguns to look for oil and gas deposits deep below the ocean floor in an area twice the size of California, stretching from Delaware to Florida. According to the Department of the Interior (DOI), these dynamite-like blasts are expected to injure and possibly kill large numbers of dolphins and whales along the East Coast and disturb the necessary activities of millions more.

One species of particular concern is the North Atlantic right whale, the rarest large whale species, of which there are only approximately 500 left worldwide.

“By failing to consider relevant science, the Obama Administration’s decision could be a death sentence for many marine mammals, and needlessly turning the Atlantic Ocean into a blast zone,” said Jacqueline Savitz, vice president for U.S. Oceans at Oceana. “If seismic airguns are allowed in the Atlantic, it will jeopardize wildlife as well as commercial and recreational fisheries, tourism and coastal recreation—putting more than 730,000 jobs in the blast zone at risk.

"In its rush to finalize this proposal, the Obama Administration is failing to consider the cumulative impacts that these repeated dynamite-like blasts will have on vital behaviors like mating, feeding, breathing, communicating and navigating."

Seismic airguns shoot extremely loud and repeated blasts of sound, each 100,000 times more intense than what one would experience if standing near a jet engine. The dynamite-like blasts occur every ten seconds, for days to weeks at a time.

Graphic courtesy of Oceana report,
A Deaf Whale Is a Dead Whale

The decision comes one week after more than 100 scientists called on President Obama and his administration to wait on new acoustic guidelines for marine mammals, which are currently in development by the National Marine Fisheries Service. These guidelines are 15 years in the making and aim to provide a better understanding of how marine mammals are impacted by varying levels of manmade sound as well as demonstrate the measures that are needed to protect them.

On Wednesday, Sen. Booker (D-NJ) and eight additional U.S. Senators sent a letter to DOI Secretary Sally Jewell urging her to hold off on issuing this administrative decision until all of the best available science, including these new acoustic guidelines, can be incorporated.

“With offshore drilling in the Atlantic more than four years away, there is absolutely no justification for failing to include the best available science in this decision,” said Savitz. “Seismic airguns create one of the loudest manmade sounds in the ocean, and we should be doing everything we can to protect marine life from their loud blasts."

"These devices are loud enough to kill small animals like fish eggs and larvae at close ranges and can disrupt the behavior of large animals like whales and dolphins from up to 100 miles away. It’s as if the Obama Administration has learned nothing from the destruction that similar testing has caused off the coasts of Namibia, Australia and Madagascar.”

Graphic courtesy of Oceana report,
A Deaf Whale Is a Dead Whale

In comments to DOI, Oceana has argued that the federal government has not developed adequate closure areas to protect the migratory corridor and nursery of the critically endangered North Atlantic right whale and has failed to fully consider safer alternative technologies such as marine vibroseis, which is quieter that seismic airguns and has less of an impact on marine mammals.

An Oceana report released last year outlines the threats of seismic airgun use and offshore drilling to marine life and coastal economies along the East Coast, including the potential danger to commercial and recreational fisheries, as well as tourism and coastal recreation, which puts more than 730,000 jobs at risk in the blast zone.

Oceana has also delivered more than 100,000 petitions opposing seismic airguns to the director of the Bureau of Ocean Energy Management. The Mid-Atlantic Fishery Management Council, as well as approximately 50 members of the U.S. Senate and House of Representatives, also called on President Obama to stop the use of seismic airguns last year.